The Week in Review: Ten Questions the Breeders' Cup Will Answer 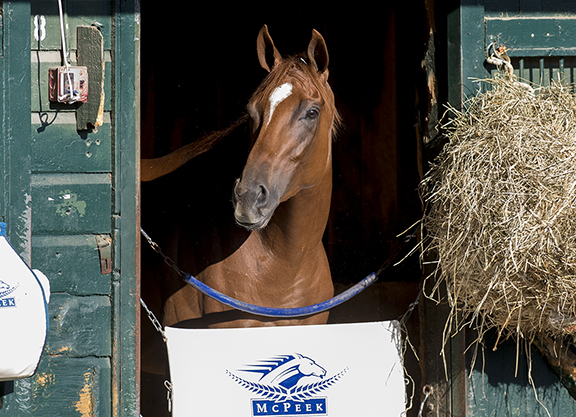 Thoughts I had while perusing the pre-entries for what promises to be a terrific Breeders' Cup?

“At this point we are going in the Distaff unless there is a late defection from the Classic,” trainer Ken McPeek told reporters Saturday morning.

The Classic field is loaded, so running Swiss Skydiver in the Distaff, where she will likely be second choice behind Monomoy Girl (Tapizar),  is the logical choice. But will it cost Swiss Skydiver her best chance of being named Horse of the Year? It may and it may not.

Obviously, had she gone in the Classic and won the race she would have been an overwhelming pick for Horse of the Year. But what if she wins the Distaff? If all the top contenders fail to win the Classic, it will probably be enough. The better question is what will happen if Swiss Skydiver wins the Distaff and the Classic is won by one of the top choices and Horse-of-the-Year candidates like Improbable (City Zip), Authentic (Into Mischief) or Tiz the Law (Constitution)?  A strong case could still be made for Swiss Skydiver.

Her overall body of work, in an era where most top horses are babied, is remarkable. Her year began in January at Tampa Bay Downs and she hasn't missed a beat since. The Breeders' Cup will be her 10th start on the year and she has competed in every month on the calendar but April while running at nine different racetracks. Her accomplishments include a win over males in a Triple Crown race, the GI Preakness S. She may not be the best horse in training, but has any horse had a better, more complete year? That's something voters will have to consider.

There is a precedent. In 2010, Blame (Arch) defeated Zenyatta (Street Cry {Ire}) in the Breeders' Cup Classic and also won the GI Whitney H. and the GI Stephen Foster H. But Horse of the Year went to Zenyatta, her overall body of work on the year swaying enough voters. It could happen again.

Princess Noor (Not This Time) was a seven-figure purchase at the 2-year-old sales, is undefeated and is trained by Bob Baffert. Those are the type of credentials that would normally make a horse a solid favorite in a Breeders' Cup race for 2-year-olds. But her speed figures tell a different story. Her best Beyer number is a 79. If the Beyer numbers are right, she is considerably slower than several other horses in she will face in the GI Breeder' Cup Juvenile Fillies.

Trainer Wesley Ward pre-entered 10 horses for the Juvenile Sprint, an unprecedented show of depth. With some horses pre-entered for other races and some others not selected into the field, Ward won't run all 10. But his plan of attack., dominating the entry box, may well pay off. He won the Juvenile Turf Sprint last year with Four Wheel Drive (American Pharoah), one of three starters he had in the race.

Jackie's Warrior (Maclean's Music) hasn't got much hype, which is a bit surprising. No one has come close to him in his four career starts and another blowout victory in the Juvenile would certainly stamp him as an exciting prospect for next year's GI Kentucky Derby. The Breeders' Cup should also provide him with an opportunity to prove he can win when facing pace pressure, something that didn't happen in his wins in the GI Hopeful S. and the GI Champagne S.

Perhaps the most intriguing horse pre-entered for the Breeders' Cup is Nashville (Speightstown), who is likely to go in the GI Breeders' Cup Sprint. He has raced just twice and in nothing tougher than a first level allowance, but many are giving him a chance after a sensational start to his career. He's won his two starts by a combined 21 1/4 lengths. His Beyer figure of 101 puts him right in the mix when compared to some of the more seasoned horses he will face.

The question is whether or not any horse with so little experience and seasoning can win a Breeders' Cup race. If Nashville overcomes those obstacles and wins we will be talking about a superstar.

Way back in 2017, she was claimed for $16,000 off of Jorge Navarro, who had her for just one start. Fast forward to the present and she has earned over $2 million and has beaten males in the GI Woodbine Mile, one of 12 stakes wins for the Canadian-based mare. This will be the toughest assignment of her career, but she has the credentials to win whatever Breeders' Cup race trainer Kevin Attard puts her in.

The idea of training a horse up to the Breeders' Cup without any recent preps has become more and more popular each year. But does it work? A handful of top horses who haven't raced in a while will help answer that question.

Among the pre-entries, there were 26 horses who will come into the Breeders' Cup with a rest of at least two months. One of the most extreme examples is Vekoma (Candy Rde {Arg}), who has not started since winning the GI Metropolitan H. July 4 in what was just his third start on the year. Then there's Oleksandra (Aus) (Animal Kingdom), who was pre-entered in the GI Breeders' Cup Turf Sprint and hasn't started since winning the GI Jaipur S. June 20.

If the layoff horses thrive, look for even more trainers to skip important fall preps in the future so they can have a “fresh” horse for the Breeders' Cup.

With the possible exception of Bob Baffert, nobody is holding a stronger hand for the Breeders' Cup than Brad Cox, who didn't win his first Grade I race until 2018. Perhaps no trainer has ever come so far so fast. In a group led by Monomoy Girl and GI Breeders' Cup Juvenile starter Essential Quality (Tapit), Cox has pre-entered nine horses, most of them serious contenders in their races.

Uni (GB) (More Than Ready) will attempt to win the Mile for the second straight year, but comes into this year's edition with some puzzling form. She started off the year with a third-place finish in the GI Just A Game S. and then a seventh-place showing in the GI Fourstardave H. Both, for a mare of her quality, were rather lackluster efforts.

She looked much better in her most recent start, winning the GI First Lady S. But the Beyer numbers say she's not the same horse this year. She came into the 2019 Mile off of successive Beyer numbers of 104 and 105. Her best number this year was the 99 she got in the First Lady,

Hall of Fame trainer Bill Mott is going against conventional wisdom and is ready to run Frank's Rockette (Into Mischief) against the boys in the Sprint rather than against fillies in the GI Breeders' Cup Filly & Mare Sprint. That's a bold move from a Hall of Fame trainer who is convinced that his horse prefers the Sprint distance of six furlongs to the Filly & Mare Sprint distance of seven furlongs. Another factor is the competition in the Filly & Mare Sprint. With Gamine (Into Mischief), Serengeti Empress (Alternation), Speech (Mr. Speaker) and Venetian Harbor (Munnings), it's no easy spot.