Home » Archive » Shared News » The Week in Review: Sorry Bob, It's Not OK

The Week in Review: Sorry Bob, It's Not OK 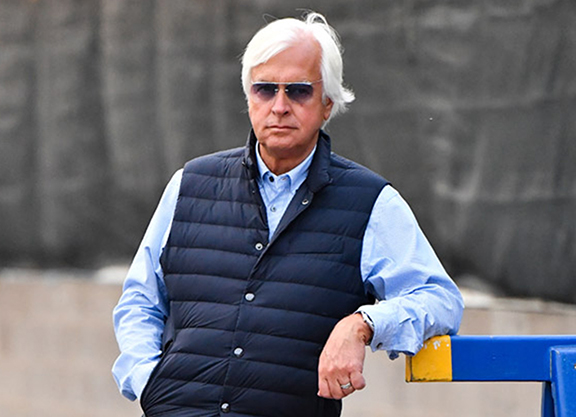 When Bob Baffert told us last week that he thought the positive drug test for Medina Spirit (Protonico) following the GI Kentucky Derby was the result of his having been treated with an anti-fungal ointment, he seemed to be suggesting that the whole thing was an honest and forgivable mistake. No harm, so why the foul?

“This has never been a case of attempting to game the system or get an unfair advantage,” he said.

On that, he's likely telling the truth. That Baffert would use a rather benign corticosteroid as performance-enhancer does seem like a reach. As he also said during the week, “Bob Baffert is not stupid.”

So let's give him the benefit of doubt and assume that Medina Spirit was treated with an ointment that contained betamethasone to help clear up a case of dermatitis. Let's assume that's the root cause of the positive. That doesn't mean it's OK. Not even close.

For his veterinarian to have prescribed the ointment, Otomax, and for Baffert to have signed off on the treatment, would mean they are guilty of an alarming and unacceptable degree of sloppiness. How could they have not known that Otomax contains betamethasone? It says so right on the box. Did they not know that betamethasone cannot be in a horse's system in Kentucky on race day? Everyone else did. Baffert may not be stupid, but it sure looks like he is reckless.

Had this been any other trainer in any other race, the story wouldn't have gone very far. But it wasn't. It was the Kentucky Derby and the trainer is, easily, the most recognizable figure in the sport. That's why this made national headlines, drew the attention of the late night talk show hosts and had all of our non-racing friends peppering us with questions. Even Saturday Night Live got its pound of flesh, lampooning Baffert during the Weekend Update segment. Donald Trump called Medina Spirit a junky. Ouch.

The general public cannot be expected to know the difference between a therapeutic ointment and hardcore performance-enhancers. Unfairly or not, the widespread perception is that someone doped a horse and cheated to win the Kentucky Derby, so horse racing must be a sport with a rotten core.

That's never a good thing, but it couldn't have come at a worse time. When it comes to public perception, racing keeps taking one hit after another. In 2019, there were the horse deaths at Santa Anita. In 2020, it was the indictment of 27 people, including high-profile trainers Jason Servis and Jorge Navarro, for their part in an alleged doping scheme. Now this.

There are powerful forces out there who want to see horse racing outlawed, and what do we do? We keep giving them exactly what they want and need, talking points when they argue that horse racing is cruel to animals. When does it stop?

Last November, prior to the Breeders' Cup, Baffert, reeling from a string of drug positives, issued a statement in which he promised to do better.

“Given what has transpired this year, I intend to do everything possible to ensure I receive no further medication complaints,” he said. He outlined a series of steps he was going to take, including hiring Dr. Michael Hore to oversee his operation as a watchdog. “I humbly vow to do everything within my power to do better. I want my legacy to be one of making every effort to do right by the horse and the sport,” he said.

Instead, it appears that it was business as usual around the Baffert barn, and he did nothing at all to right the ship. That includes reneging on his promise to hire Hore.

Saturday, Baffert wisely stayed behind in California and let assistant Jimmy Barnes run the show at Pimlico. When the race was over, at least for a minute or two, the story was not about Baffert. Trainer Michael McCarthy was so touched and thrilled with the win by Rombauer (Twirling Candy) that he had to fight back tears. People like McCarthy are what's good about this game. A former assistant to Todd Pletcher, he's worked for everything he has and has managed to win a lot of races without even a hint of suspicion. Baffert keeps arguing that the tests are too sensitive, but if that is the case, how do you explain how McCarthy has sent out 1,096 starters and has never had a positive test? (His record, though, does include a $100 fine for not having a nozzle on a hose).

Medina Spirit ran third in the GI Preakness S., which meant the sport dodged a bullet. Imagine having a horse going for the Triple Crown after failing a drug test in the Kentucky Derby. A circus does not even begin to describe it. It would have been terrible for the sport.

Medina Spirit wasn't good. Concert Tour (Street Sense), his other starter in the Preakness, didn't show up, losing by 34 1/4 lengths. Baffert was 0-for-4 at Pimlico, including a lackluster effort by Beautiful Gift (Medaglia d'Oro) in the GII Black-Eyed Susan S. Did that have anything to do with the extra testing performed on the Baffert horses? Probably not, but the skeptics aren't convinced. Too bad. Baffert brought that upon himself.

Unless the split sample comes back negative, Baffert will never be able to fully put this behind him. It will be part of his legacy, as much, if not more so than his Triple Crown wins. Worse, yet, it has given the sport a nasty black eye that is not going away anytime soon.

As was the case last November, Baffert issued somewhat of a mea culpa in a statement he sent out before the Preakness.

“I acknowledge that I am not perfect and I could have better handled the initial announcement of this news,” he said.

He stopped short of apologizing, but what good would that have done? The damage has been done and it will be a long time before this goes away, if it ever does. Most likely, Baffert will be fine. He's very good at what he does and owners will keep on giving him the best-bred, most expensive horses around. But will the sport be fine? Maybe not. And, this time, our self-inflicted wound was so avoidable. Bob, you let the sport down.