Home » Archive » Shared News » The Week in Review: Pink Lloyd Reminds Us How Special the Thoroughbred Is

The Week in Review: Pink Lloyd Reminds Us How Special the Thoroughbred Is 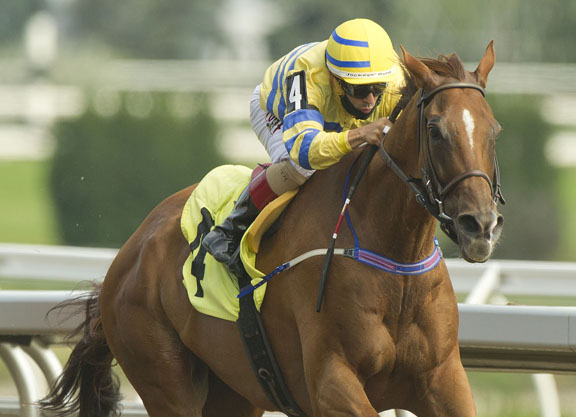 With the Medina Spirit (Protonico) positive, the GI Breeders' Cup Juvenile Turf debacle, the on-going saga of Jorge Navarro, Jason Servis and the rest and the closing of Arlington Park, it's been another tough year for horse racing. This game sure can get you down at times.

But we will always have the horse.

These beautiful, athletic, noble, graceful animals, they always find a way to make you feel good about the sport. Which is why so many people were smiling and cheering Saturday at Woodbine as Pink Lloyd (Old Forester)'s fairytale story had a fairytale ending.

Over the six years that he raced, Pink Lloyd, now nine, was never the fastest horse or the best horse out there. Since he never raced outside of Woodbine, it's fair to question his accomplishments. But there are other ways to measure how exceptional a horse truly is. Was there any horse more likeable or easier to root for? A horse that made you appreciate all that is good with this sport? No. It's not even close.

Pink Lloyd, who was retired after his win Saturday in the GII Kennedy Road S., is by a sire who stands for $4,000 and was bought as a yearling for $30,000 Canadian. He didn't even make it to the races until he was four. He appeared destined to be just another horse.

But what no one could have known back when he made his career debut on Aug. 28, 2016 was that this horse had something that few other horses have.

“I'll tell you what makes him so great–heart and desire and liking what he's doing and wanting to win,” said his trainer Robert Tiller.

Once Pink Lloyd got going, there was no stopping him. He made 38 career starts, won 29 times overall and won 26 stakes races, including three editions of the GII Kennedy Road S. These are the sort of numbers we are unlikely to see again.

He was named Canadian Horse of the Year in 2017 and will be named, for the fifth straight year, the 2021 Canadian Sprint Champion. But this has been his most extraordinary year, the year where he showed what he is made of.

Pink Lloyd finished third in the Kennedy Road in 2020 in his final start of the year and began his 9-year-old campaign with a loss to the 5-year-old Souper Stonehenge (Speightstown) in the GIII Jacques Cartier S. He lost his third straight when Super Stonehenge beat him again in the GIII Vigil S.

He looked done, at least when it comes to his being a top horse, and Tiller admitted that the gelding had lost a step. Behind the scenes, he was planning for his retirement.

But Pink Lloyd wasn't ready for retirement. The desire was still there.

He got untracked in time to win the GIII Bold Venture S. and then the Ontario Jockey Club S. But the Kennedy Road was supposed to be a different story. For the first time since August, he had to face Souper Stonehenge again, along with seven others, many of whom were half his age. Pink Lloyd was sent off at 7-2, the highest odds he had gone off at since April 15, 2017.

Never underestimate this horse. He won by a half-length and returned to winner's circle amid a standing ovation from those in the crowd.

“It was a tremendous way to go out,” Tiller said. “He's Woodbine's horse. He's Canada's horse.”

Making the story even better is the classy way Tiller and primary owner Frank Di Giulio, Jr. handled the end of his career. With Pink Lloyd finishing out as strongly as he did, it's not unreasonable to expect that he could once again make a lot of money on the track as 10-year-old in 2022. (He made $289,742 this year). But the owner and trainer understood what the right thing to do was. They let him go out healthy and still on top. Within a few days, his new home will be the LongRun Thoroughbred Retirement Society.

He'll be pampered at LongRun, which is just what he deserves after all he has accomplished. Pink Lloyd embodied everything that is good about this sport.

Ricardo Santana, Jr. rode his first horse for Steve Asmussen in 2012, the start of a jockey-trainer partnership that has been one of the most successful in the sport. According to Equineline, Santana has ridden 812 winners for Asmussen from 4,069 mounts. The two have teamed up to win 65 graded stakes. The list includes six Grade I's this year alone, the GI Jockey Club Gold Cup, the GI Frizette S., the GI Cotillion S., the GI Hopeful S., the GI Spinaway S. and the GI Forego S.

But Asmussen is no longer putting Santana on any of his horses. He won five races Thursday at Churchill Downs, with Tyler Gaffalione riding three of the horses and Joel Rosario picking up the other two wins. This comes after Santana went 0-for-81 at Keeneland, with the majority of his losses coming aboard Asmussen-trained horses. Santana is 2-for-38 at the current Churchill meet.

Staying Away in Droves at Zia Park

Zia Park in New Mexico put together a terrific card last Tuesday. They had six stakes races, topped by the $250,000 Zia Park Derby. Flavien Prat rode the card and so did Irad Ortiz, Jr., who teamed up with Asmussen to win three stakes. The hope would be that a card of that type would generate some enthusiasm and bring out some fans. It didn't quite work out that way, which shows just how hard it has become to get people to turn out and go to the racetrack.

According to Tuesday's Equibase charts, the crowd at Zia Park was 650 and the on-track handle was a paltry $44,598. Actually, that was an improvement over the day before when the attendance was 300 with an on-track handle of $21,238.

Kent Desormeaux's off-track problems have been well documented and they threatened to end his career. In 2020, the Hall of Famer had just 29 wins, easily the lowest in his career, after missing much of the second half of the year as he was undergoing three months of substance-abuse rehabilitation. That came after he was suspended by the Del Mar stewards for 15 days after an altercation with a TVG cameraman in which the jockey is alleged to have used racial slurs.

It took a while, but he is back on track and again showing the sort of ability that once made him one of the sport's biggest stars. Desormeaux won two races at Del Mar Wednesday and another Thursday. He then won the GII Hollywood Turf Cup S. Friday and the GI Hollywood Derby Saturday.

After winning the first and fifth races Sunday at Del Mar, Desormeaux had won with seven of his last 12 mounts.