Home » Archive » Shared News » The Week in Review: No Masking the Obvious

The Week in Review: No Masking the Obvious 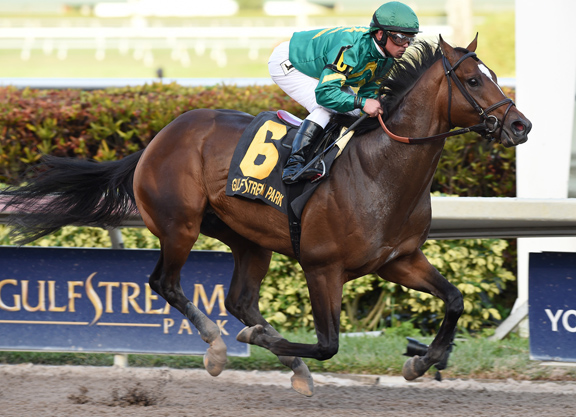 Yes, we all tend to get too carried away when a prospect for the GI Kentucky Derby does something this early in the season. Yes, the race wasn't even a graded stakes race. Yes, this colt has yet to run around two turns. Yes, we tend to forget that the best 2-year-olds from last year have largely yet to come out of the woodwork this year. Is the hype for Mask (Tapit) over the top? Not in the least.

That was some show the Chad Brown-trained, Lane's End-owned 3-year-old put on Saturday in the $100,000 Mucho Macho Man Stakes at Gulfstream.

For a non-graded stakes run in January, the one-mile, one-turn event drew a surprisingly tough field. Dale Romans sent out the highly regarded stakes winner Dak Attack (Ghostzapper) and Todd Pletcher's Bal Harbour (First Samurai) was coming off back-to-back stakes wins. Meanwhile, all Mask had done was win a 6 1/2-furlong maiden race at Belmont, albeit in impressive fashion. Six others lined up against him and he turned the Mucho Macho Man into a one-horse race.

With Javier Castellano aboard, he did have things his own way, breaking sharply this time after a slow beginning in his debut, and then going right to the front. When he opened up on the field after fractions of 24:43 and :48.13, it was clear the race was already over. It's what he did from the top of the stretch to the wire that was so impressive. With his horse galloping along effortlessly on the turn, Castellano asked Mask for some run, but for no more than six strides or so. That's all the time it took for him to spurt away from the field. Castellano then put the brakes back on and Mask cruised through the final three-sixteenths with absolutely no urging from his rider. He won by 6 1/4 lengths.

Is Mask the best 3-year-old in the country? It's far too early to tell. But there is every chance that he could be, and that's the exciting part about this.

Brown was non-committal about where Mask would run next, but the logical spot would be the Feb. 3 GII Holy Bull. Brown's other 3-year-old star, GI Breeders' Cup Juvenile winner Good Magic (Curlin) is, according to owner Bob Edwards, being pointed to the March 3 GII Fountain of Youth S., so it's unlikely Brown will circle that race on his calendar for Mask.

Mask's victory was just another reminder that Brown seems intent on separating himself from the pack, moving ahead of rivals like Todd Pletcher, Steve Asmussen and Bob Baffert in a quest to firmly establish himself as the sport's top trainer. The days when he was “just a grass trainer” are long gone. He's already won a Classic, the GI 2017 Preakness with Cloud Computing (Maclean's Music), and in Mask and Good Magic he trains the two leading East Coast contenders for this year's Derby.

If Brown does not win this year's Kentucky Derby, a race that eluded his mentor, Bobby Frankel, it may be because someone on the West Coast has a horse that proves to be better than Mask and/or Good Magic. With Baffert having a handful of serious Derby contenders in his barn, that's very possible.

Mask shared the spotlight Saturday with the Baffert-trained McKinzie (Street Sense). While his win in the GIII Sham S. at Santa Anita wasn't quite as electric as Mask's victory hours earlier, it was pretty darn good.

The hype machine went into overdrive on this one, too, after he broke his maiden, so it was actually a bit of a disappointment when he won the GI Los Alamitos Futurity, but did so only because the stewards took down stablemate Solomini (Curlin) after a hard-fought three-horse stretch duel. Baffert took the blinkers off for the Sham, and it appeared to help. The Sham was an easier sport than the Los Al race, but the horse clearly had more zip on his fastball as he won by 3 1/2 lengths and was, like Mask, geared down as he crossed the wire. Obviously, McKinzie is a major player.

The Eclipse Award finalists were announced last week and we pretty much learned nothing. Not that there was much to learn. The announcements of the 2017 Eclipse winners figures to be one of the most anti-climactic ever as most divisions fall into the slam dunk category.

The most competitive category is the 2-year-old male championship, which will be won by either Good Magic or Bolt d'Oro (Medaglia d'Oro). After polling some fellow voters, I've been hard pressed to find anyone voting for Good Magic. Bolt d'Oro is 1-5 to win.

It was interesting to note that Todd Pletcher was not one of the three finalists in the trainer category. That has not happened since 2009. Pletcher is a seven-time Eclipse winner.

And despite his best efforts to bring attention to his accomplishments in 2017, Sol Kumin was not a finalist in the owner category. Through his bloodstock advisor, Liz Crow, Kumin sent out a missive to Eclipse voters asking them to consider his accomplishments. His point was that his success on the track was likely to be overlooked because he owns virtually all of his horses in partnerships and runs under three different stable names. Kumin owned all of or part of 25 graded stakes winners, including 7 Grade I winners.

Crow and Kumin made a valid point and he certainly deserved to be among the top three, if not the outright winner. Voters should have done a better job, but, that said, it was not easy to fully realize what Kumin did. That's because statistics made available to voters don't combine an owners accomplishments if they include several different partnerships. Kumin also didn't help himself. Not only is it rare when a horse runs under his name and not that of a stable, he runs under three different stable names. There are likely voters who didn't even know who he is. Kumin could help his case by simplifying things and attaching his name, and not those of a stable, to the ownership listing of any horse he's involved with.

Another Big Year for Maryland Racing

The Laurel-Pimlico circuit continues to be one of the brightest success stories in racing under The Stronach Group and the head man in Maryland, Sal Sinatra. It was announced this week that total handle on races at Laurel Park and Pimlico Race Course in 2017 exceeded $600 million for the first time since 2008. Total handle was $627.3 million compared to $560.1 million in 2016 while average handle was $3.3 million, up from $3.091 million in 2016.

Wagering on racing at Laurel Park and Pimlico Race Course has been up year-over-year since 2015 and is up $216 million since 2014.

Laurel is following in the footsteps of its sister track, Gulfstream, which has also seen impressive increases in business over the last few years. The Stronach Group is making it look easy, and its success makes you wonder why other racetracks can't do the same. The answer is not straightforward, but it definitely involves the fact the Stronach Group is a “racing first” company and its executives generally care about the sport. That's certainly not the case at a lot of tracks these days.