Home » Archive » Shared News » The Week in Review: McPeek is Different, And That's Why He's Successful

The Week in Review: McPeek is Different, And That's Why He's Successful 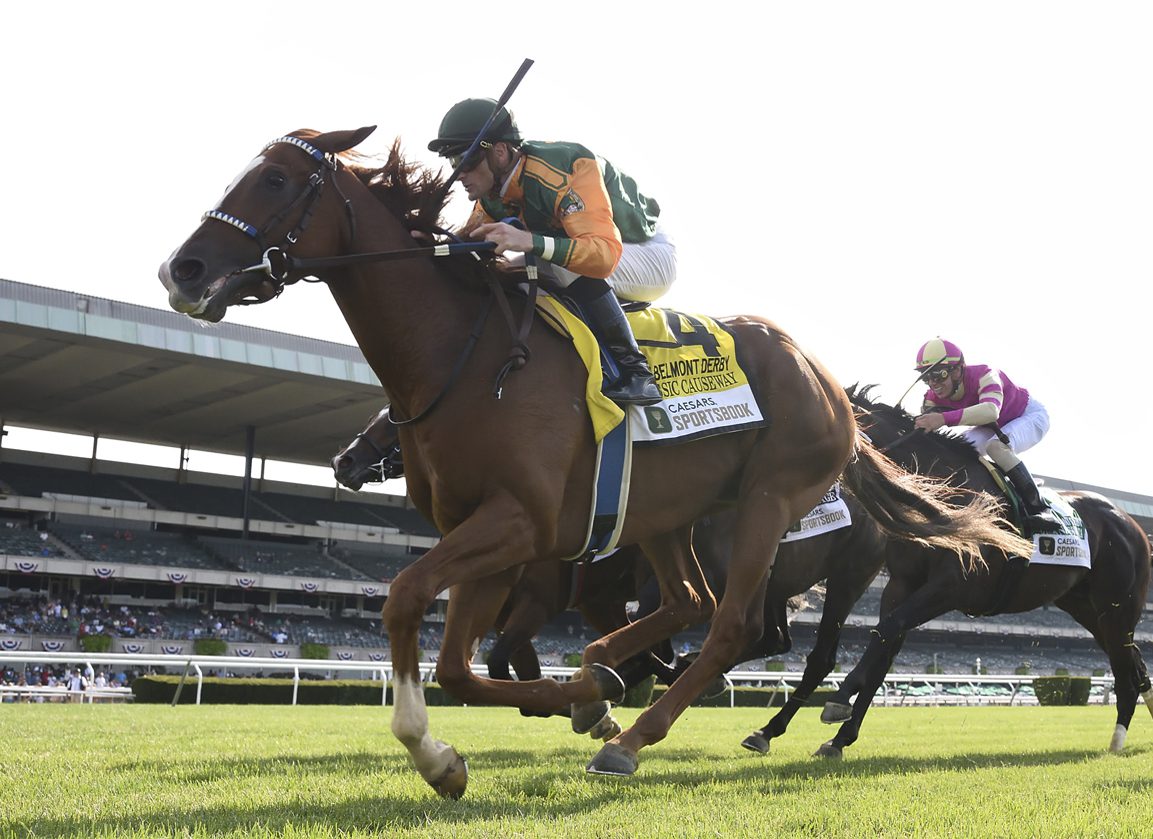 The book on training the modern racehorse goes something this: Give them at least six weeks off between races, start them no more than five times a year and never take a chance. It's a book that, apparently, Ken McPeek has never read.

Among top-tier trainers, there is no one like him. He'll run fillies against the boys, run back in a week and he's not afraid to throw a 50-1 bomb into a race or, in the case of 2022 GI Belmont S. winner Sarava (Wild Again), a 70-1 shot. It hurts his winning percentage, which is at 17% on the year. But McPeek doesn't seem to care. His job is to make money for his owners, and he understands that the more chances he gives his horses, the more money his clients are likely to make.

McPeek dipped into his bag of tracks Saturday when he entered Classic Causeway (Giant's Causeway) in the Caesars Belmont Derby Invitational, a decision that led to a Grade I win in a $1-million race.

The colt had shown a lot of promise early in his career and was among the top contenders for the GI Kentucky Derby after winning the GII Tampa Bay Derby. Then trained by Brian Lynch, Classic Causeway went off form and finished eleventh in the GI Florida Derby and eleventh again in the GI Kentucky Derby. The owners made a move after the Kentucky Derby and turned the horse over to McPeek. In his first start for McPeek, he ran third in the GIII Ohio Derby, a sign that maybe he was about to come around.

That might have set him up for some of the big dirt stakes coming up for 3-year-olds. Instead, McPeek targeted the Belmont Derby. Never mind that Classic Causeway would have to come back in two weeks or that he had never run on the grass. It was a $1-million race, and McPeek decided to take a shot, something few other trainers would have done with this horse.

It didn't hurt that Classic Causeway was the recipient of a lucky break. Emmanuel (More Than Ready) was not only a top contender in the race but the clear speed. But he was scratched by the stewards for reasons that remain unclear. The New York Gaming Commission tweeted the following: “The Commission Steward has ordered the scratch of Emmanuel, scheduled to run in today's Belmont Derby, due to issues relating to veterinary records. The matter remains under review.”

With Emmanuel out, Classic Causeway was the only speed in the race. Jockey Julien Leparoux picked up on that and put in a heads-up ride. Classic Causeway led by a length after a half-mile had been run in :48 and, from there, they couldn't catch him.

McPeek's aggressive handling of horses was also on display at Horseshoe Indianapolis, where he had a good showing Saturday. He got a win in the $100,000 Mari Hulman George S. with Semble Juste (Ire) (Shalaa {Ire}), who was coming back in nine days after winning an allowance at Churchill. In the GIII Indiana Oaks, he ran Runaway Wife (Gun Runner) off an eight-day layoff and Silverleaf (Speightster) off a nine-day layoff. Runaway Wife finished second and Silverleaf was third. McPeek also ran Rattle N Roll (Connect) in the GIII Indiana Derby, just a week after he won the American Derby. He finished seventh.

On Saturday, McPeek also won the GIII Iowa Oaks with Butterbean (Klimt). She was coming back in 28 days, by McPeek standards a long layoff.

The only horse he ran all day that had more than four weeks off was Tiz The Bomb (Hit It a Bomb), who was making his first start since the May Kentucky Derby in the Belmont Derby. He finished ninth.

On the day, McPeek ran horses in five different races, all of them stakes. He won two and had two others, both fillies, finish in the money and pick up black type. Among that group, everyone was running back in 28 days or less. That just doesn't happen anymore.

Chad Brown winning a training title at the NYRA tracks is no longer big news, but what Brown accomplished at the Belmont meet that ended Sunday was historic.

With 153 starters, he won 47 races, setting a new record for most wins by a trainer at the Belmont spring-summer meet. The old record was 44, set by David Jacobson in 2013. But Jacobson compiled those numbers during a year in which the meet ran for 56 days. This year's meet ran for 44 days.

Twelve of Brown's winners came in graded stakes races and four were in Grade I's. He won 14 stakes overall. He won 27 turf races and 20 on the dirt. But his winning percentage on the turf was 26%, while he won with 41% of his dirt starters.

They could only find five horses to run in the GII Suburban S. Saturday out at Belmont–a race that has been won by Easy Goer, Dr. Fager, Forego, Buckpasser, Kelso, Bold Ruler–and one came from the barn of the racing secretary's best friend, Uriah St. Lewis. The winner, Dynamic One (Union Rags), had never before won a graded stakes.

Between the June 11 GI Metropolitan H. and the GI Woodward S., likely to be run this year on Oct. 1, NYRA will offer five graded stakes for males on the dirt. (The other two are the GI Whitney S. and the GI Jockey Club Gold Cup). Please don't try to tell me this isn't a problem.

For years, the Pennsylvania Racing Commission seemed like a do-nothing organization run by bureaucrats who had better things to do than to truly police the sort. But it looks like that has changed.

Juan Vazquez, who has a long and troubling history of breaking the rules, shipped a horse in January from Belmont to Parx. The horse, Shining Colors (Paynter), arrived in such bad shape that she had to be euthanized due to what the stewards said was a case of severe laminitis. Vazquez was suspended for 2 1/2 years Friday, and the stewards called his actions “grossly negligent, cruel and abusive.”

This was not your typical slap on the wrist, but a penalty that fit the crime. Obviously, the racing commission has had enough of Vazquez's flouting the rules and it brought its hammer down on a trainer who should have been thrown out of the game years ago.

He is eligible to return on Jan. 26, 2025. Will someone–a racing commission, a track?–let him race at that time? One would hope that the sport can show enough backbone that Vazquez will never participate again. Just don't count on it.