The Week in Review: Live Racing Hinging on Definition of ‘Essential’ 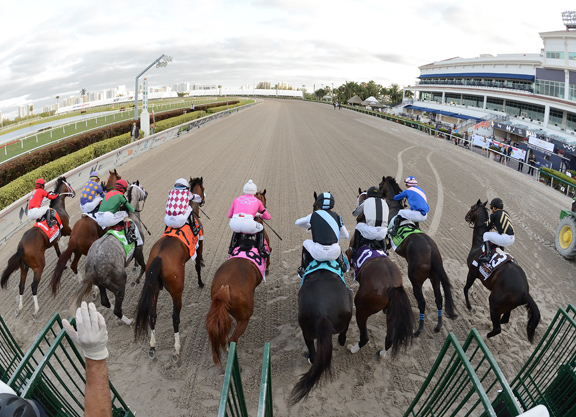 Aqueduct Racetrack has been commandeered by the State of New York to be converted to a COVID-19 hospital.

One day after an official from Santa Anita Park predicted a humanitarian crisis could erupt if live racing got shut down, county health officials ordered the spectator-free racing there to cease.

Hall of Fame jockey Javier Castellano announced last Thursday that he has tested positive for the coronavirus, becoming the sport’s most prominent participant to disclose an infection.

Later that same day, six Belmont Park backstretch workers were additionally confirmed as COVID-19 positives. Those members of the racing community aren’t as well known as someone like Castellano, but their personal health is no less vital. Their illnesses also imperil all of the other horse caretakers who live in the dormitories at New York’s largest track.

The racing will be conducted, as it has been since mid-March, in front of empty grandstands closed to everyone but essential personnel.

As Santa Anita found out this week, the definition of “essential” is very much open to interpretation, because state and local governments across the nation have mandated that only “essential businesses” remain open to keep the virus from spreading.

But racing is not in a vacuum in this respect. All sorts of businesses and industries are being called out as to whether or not they are borderline “essential” in the midst of the pandemic.

Liquor stores are largely still open, and in states where it’s legal, so are some cannabis dispensaries. In New York City, you can even arrange for your neighborhood bar to bring over a $60 bag of potato chips. That expensive snack delivery just happens to come with a free shaker full of pre-mixed martinis, effectively skirting strict laws about off-site alcohol sales.

“The optics of us racing while the rest of the world is at home, I understand, are terrible,” Aidan Butler, the chief strategy officer and acting executive director of California racing operations for The Stronach Group (TSG), which owns Santa Anita and Golden Gate Fields, told the California Horse Racing Board (CHRB) last Thursday.

“But the context of how we’re different, and how we’re a very specialized industry that really is self-contained, needs to be explained,” Butler said.

Butler made the cogent argument that the 1,700 horses at Santa Anita have to be cared for and exercised every morning regardless of whether money-making opportunities are going on at the track in the afternoon. So if protective health measures are in place, why not give the Thoroughbred community the chance to earn purses by staging the races?

“There are far more people involved in a morning’s training than in an afternoon’s racing,” Butler pointed out.

But the CHRB didn’t opt for the final say on whether or not Santa Anita got to race. The board instead mandated that TSG follow the orders of the Los Angeles County Health Department, which imposed a shutdown about an hour before Friday’s first race.

Given the fluidity of the “essential” interpretations, the six remaining open Thoroughbred racing venues could be in an unintentional race to be the last track standing until life gets back to some form of pre-virus normal.

As New York Thoroughbred Horsemen’s Association president Joe Appelbaum told TDN last week in the aftermath of Aqueduct stopping live racing, “In a few days or a week, it will be amazing if any of the jurisdictions that are currently racing are still running.”

A notice posted on the Tampa Bay Downs overnights informed horsemen of a 10% across-the-board purse cut as of Sunday.

A separate notice stated that only jockeys from the Tampa Bay Downs jockey colony will be allowed to ride there, and “if a jockey rides outside of Tampa, they will not be allowed to return.”

Oaklawn’s overnight also announced restrictions related to ship-ins: “Horse(s) only, no humans from the states of Louisiana or New York will be allowed on the grounds. All other states the horse(s) and the trainer and/or assistant trainer only allowed at this time.”

The Will Rogers Downs overnight warned that “Jockeys coming from Florida, Illinois and Louisiana must provide documentation of a negative test for the COVID-19 virus within 14 days of race day before they will be permitted to ride.”

This story was posted in Shared News and tagged California Horse Racing Board, Gulfstream Park, Santa Anita, The Stronach Group.