The Week in Review: Latest Crisis Descends on Sport, Baffert 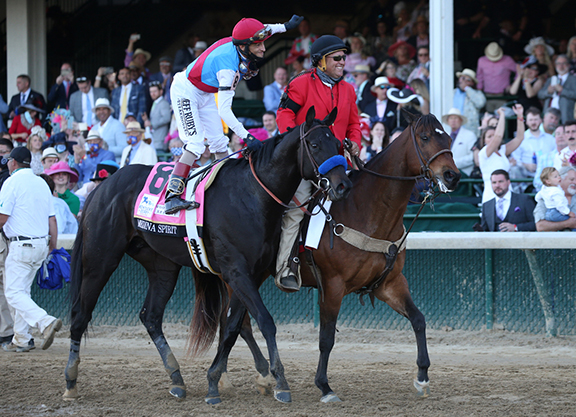 The week between the GI Kentucky Derby and the GI Preakness S. is typically a quiet one, and this year the racing industry was basking in the glow of an exciting and safe Derby headlined by a feel-good story: Medina Spirit (Protonico), a hard-battling underdog any average joe could have purchased at public auction as a $1,000 yearling, had unexpectedly won the Run for the Roses under the care of seven-time Derby-winning trainer Bob Baffert, and was heading to Baltimore as a likeable overachiever trying to win the second jewel of the Triple Crown.

But the sport's pre-Preakness idyll was abruptly launched into turmoil and chaos Sunday morning, absorbing yet another credibility blow when a clearly rattled Baffert stepped up to a cluster of microphones at a hastily called press conference at his Churchill Downs stable to announce that Medina Spirit had tested positive for 21 picograms of betamethasone, a relatively common corticosteroid that is used with horses to treat inflammation in joints.

Betamethasone is typically administered by intra-articular injection, but is prohibited to be in a horse's system on race day in Kentucky, which lists a 14-day withdrawal guideline for that steroid's use.

If confirmed by split-sample testing, the betamethasone finding could cost Medina Spirit his Derby win, which would make the colt only the second Derby victor in 147 years to be disqualified for a post-race drug infraction. In 1968, Dancer's Image was DQ'd for a phenylbutazone positive.

Baffert, who repeatedly denied ever treating Medina Spirit with betamethasone during the 13-minute conference and added that the colt had passed an Apr. 18 out-of-competition test, now appears on a trajectory to have his figurative “day in court” to adjudicate the matter.

In reality though, that time frame could extend much, much longer–it took five full years before the controversial DQ of Dancer's Image was finally upheld by a judge, and that was half a century ago in a far less litigious era.

Expect this story to hang heavily over the remainder of the 2021 Triple Crown season and beyond.

From a public-relations perspective, Baffert's relatively quick acknowledgment of the betamethasone finding resonated as a carefully executed, almost textbook-styled example of damage control and how to shape a fast-forming narrative during a time of duress. If he has professionals guiding him in this endeavor, they are earning their money.

Accompanied by his attorney just outside his shed row Sunday morning, Baffert got out in front of the news (the test results had not yet been announced by the Kentucky Horse Racing Commission), professed his innocence with a touch of emotion (“the biggest gut punch in racing for something that I didn't do”), and asserted that he'd be cooperative and transparent as the investigation unfolds (even conducting his own DNA and hair testing on Medina Spirit). Then Baffert chose to implicate circumstances as the hazy, underlying culprit in the case (“I don't know what is going on with the regulators…. It's a complete injustice…. It's getting worse, and this is something that has to be addressed by the industry.”).

Unfortunately–for both himself and the sport–Baffert has had ample practice of late in explaining troublesome medication matters to the media.

The betamethasone finding, if confirmed, will be Baffert's fifth positive test for a regulated but prohibited-on-race-day drug within the past year. During that same time frame, Baffert was also embroiled in a long and complicated court and racing commission battle in California over whether to disqualify 2018 Triple Crown winner Justify from that year's GI Santa Anita Derby because of a scopolamine finding, a case that was initially shielded from the public in executive sessions by the California Horse Racing Board (CHRB).

The Justify complaint (deemed to have been caused by eating contaminated hay) was eventually dismissed by the CHRB.

A pair of May 2, 2020, lidocaine positives in two winning Baffert trainees–Charlatan (Speightstown) in the GI Arkansas Derby and Gamine (Into Mischief) in an allowance race–were blamed by Baffert on accidental contamination from a human pain-relief patch worn by his assistant. This initially resulted in a 15-day suspension for Baffert and the DQ of both horses, but those sanctions were recently reversed by the Arkansas Racing Commission, which instead fined Baffert $5,000 for each infraction.

When Gamine again tested positive on Sept. 4, 2020, this time for betamethasone when running third in the GI Kentucky Oaks, she was disqualified, placed last, and Baffert was fined $1,500. Baffert later acknowledged the eventual champion female sprinter had been treated with the drug, but he believed he had followed the proper withdrawal-time guidelines.

Reality versus public perception will no doubt percolate to the surface as Medina Spirit's case winds through the regulatory hierarchy and (quite likely) the legal system. One argument that is almost certain to be brought up in support of Baffert is that his recent spate of drug positives aren't primarily for performance-enhancing substances per se, but for therapeutic medications that are rigidly controlled and tested down to trillionths of a gram.

But the general public won't really care if that's the case, because the frequency of the positive tests in Baffert's horses are starting to take on an “always something” tenor. Each of his medication violations gets decided individually, essentially in a vacuum, by whichever racing commission has lodged the complaints. But the public–and peers within the industry–will judge Baffert's offenses in the aggregate, and it's no secret that the chief question being asked is “Why so many?”

The answer to that question might end up being one that the industry as a whole will find incompatible with Baffert's reputation as the preeminent trainer of his era. Will he go down in history for having saddled seven Derby winners? Or for saddling the sport with asterisks and public-relations headaches at a time when equine welfare and drug abuse are the focal points of Thoroughbred racing's future?

Churchill Downs has already barred Baffert's horses from being entered there until the conclusion of the investigation by the state racing commission. Other jurisdictions could follow.

“I know I'm the most scrutinized trainer. I've got millions of eyes on me,” Baffert said Sunday morning, underscoring that he's okay with that level of scrutiny, and that he knows it comes with the territory of winning so many iconic races.

Good point. If the regulatory problem with therapeutic medications is indeed systemic, as Baffert asserts, why aren't other high-profile trainers collecting the same proportion of drug positives?

Collectively, those five trainers started 8,860 total horses in 2020 and so far through 2021. According to the Association of Racing Commissioners International rulings database, none of them has triggered a medication positive during the same time frame that Baffert racked up five of them from 449 starters.

Later on Sunday, back at his home base at Santa Anita Park, Baffert had one horse entered to run, a turf sprinter named Speedy Justice (Dominus). Bet down to odds-on, the colt opened up a big lead, faded, then failed to hit the board.

Depending on your perspective, some form of justice will eventually arrive.

But with the Derby result hanging in the balance, it's not very likely to be speedy.