The Week in Review: In Stronach Feud, Did Frank Fight Fair? 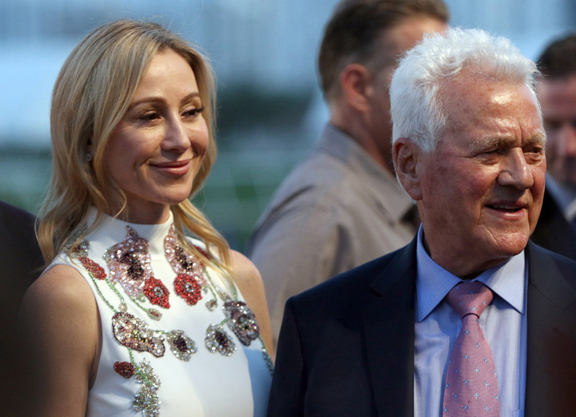 Say what you want, think what you want about Frank Stronach, but no one can deny that he loves horse racing and wants to see his tracks and the entire sport prosper. It’s hard to imagine how difficult it must be for him to be cast to the side while his daughter, Belinda, runs what he created, The Stronach Group (TSG). For most of his life, he has been a powerful man and has been in charge. No more. So far, he’s on the losing end of a fight for control of the company and has no say in how it is run.

He wanted to be heard, which is why he rented out a conference room at a local hotel and invited the Southern California racing community to hear what was on his mind. His primary idea was that he wanted to place the TSG tracks in a trust, which would guarantee that the tracks could not be bulldozed and the land developed. It’s a very good idea. The problem is, as of now, Stronach has no say whatsoever when it comes to the future of Santa Anita or any of the TSG tracks. That won’t change unless he wins the lawsuit he filed against Belinda seeking to regain control of the company. At 86, time is not on his side as the Stronach vs. Stronach lawsuit is likely to drag on in the Canadian courts for years.

Frank strongly implied that Belinda has ulterior motives, one of them being to shut down Santa Anita and to cash in on its immense value as real estate.

“Within management, we have forces who do not want to race,” he said. “They want to see the tracks developed. I’m totally against that, and for the past few years, I’ve been outspoken about that.”

That was his money quote, and the facts so far seem to prove him to be off base. With all that has happened at Santa Anita since this nightmarish meet began, few could have blamed Belinda if she threw up her hands, said “I want out” and put the for sale sign out in front of the track. With PETA and the media on her back, all the headaches and all the ill will that has been directed her way, why put up with all the aggravation? The easy way out would be to close the track, sell the land to developers and add a large fortune to her bank account. In fact, according to several sources, some prominent owners came to her and offered to purchase the track. She said no.

Instead of bailing on Santa Anita, she has dug her heels in and has vowed, not only to keep it open, but to do everything in her power to make it the safest racetrack in America. You might not like her ideas about Lasix, whips, etc., but her trying to curtail the use of both is her way of trying to get the animal activists to calm down and not put together a drive to put an initiative on the ballot to ban racing in the state. So far, it’s working. Better to have racing without Lasix than no racing at all.

Her latest move was to hire the respected vet Dr. Dionne Benson, who has been appointed as the Chief Veterinary Officer for The Stronach Group.

She doesn’t seem to want to run away from the problems; she wants to fix them. If not, the wrecking ball would have arrived weeks ago.

Father and daughter might not like one another, but one thing they apparently share is a love of racing and determination to see that the sport survives well into the future. Surely, Frank knows that about Belinda.

Sometimes, when it comes to Frank Stronach, all you can do is scratch your head.

This Ron Finley (no relation), who goes by the name of the “Gangsta Gardener,” seems like a terrific person. To better poor neighborhoods and better the lives of people who live in them, Finley has started a movement to plant gardens in impoverished areas like South Central Los Angeles.

But what, exactly, does that have to do with Frank Stronach, the problems at Santa Anita and his feud with his daughter, Belinda? When Stronach held the public meeting last week to voice his opinions on what is going wrong with Santa Anita and go public with some of his gripes with his daughter, he was joined on the dais by owner William Deburgh and the Gangsta Gardener.

Okay, Finley has planted some gardens in neighborhoods near Pimlico, but is that really a qualification for having a seat next to Stronach at a meeting to discuss problems at Santa Anita? And the neighborhood around Santa Anita is hardly a poor area.

Once Again, It Was Ladies’ Day at the Hall of Fame

When it was announced that Royal Delta was the only horse that would be inducted into the Hall of Fame this August, it should have come as no surprise that she is a she. A modern-era male race horse has not been inducted since Lava Man in 2015, and he was a gelding. No non-gelded horse has been inducted since Curlin in 2014. In the meantime, six females have gone in and the mare Ashado also went in in 2014.

This could be nothing more than a coincidence, but there’s also a plausible reason why it’s becoming harder than ever for males to make the Hall of Fame. If a colt has Hall of Fame ability, they likely won’t have had a career that is long enough to convince voters they’ve done enough to merit induction.

It’s very rare these days for a male horse to remain in training if they have any kind of pedigree and have won a Grade I race at two or three. It’s a matter of simple economics: they’re going to make more money breeding than racing.

The next male who retired after his 3-year-old year that will make the Hall of Fame is American Pharoah. Likely, Justify will follow three years later. But that may be what it now takes for a male horse that retires before a 4-year-old season to make the Hall–a Triple Crown victory.

There are a couple of other no-brainers among males that will soon be eligible. California Chrome and Gun Runner are certain Hall of Famers and Arrogate is highly likely to make it. But all three kept going for at least a 4-year-old season.

Why Not Havre de Grace?

That females are dominating when it comes to entry into the Hall of Fame makes it all the more surprising that voters have now turned down Havre de Grace two straight years.

In any sport, there are certain milestones that guarantee induction. Unless you are a suspected steroid user, hit .300 and/or have 500 career home runs and you will make it into baseball’s Hall of Fame. One would think that the same should apply to any filly or mare that is named Horse of the Year.

Since the Eclipse Awards were initiated in 1971, six fillies have been named Horse of the Year. Five are in the Hall of Fame. Havre de Grace, whose victory over males in the 2011 GI Woodward S. put her over the top in the Horse of the Year race, is the only exception. On this one, the voters whiffed.

I’d like to introduce a new feature to weeks when I put together the TDN’s Week In Review, “The Worst Named Horse of the Week.” The honor (or is it dishonor?) this week goes to The Creep (Twirling Candy), who was fifth in Saturday’s California Derby at Golden Gate Fields.