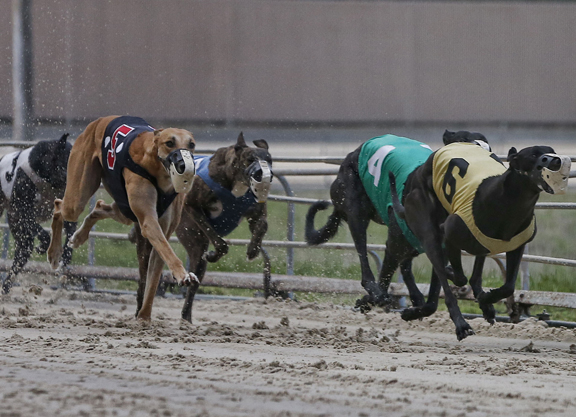 About 50 miles up I-95 from Gulfstream Park, Abbi's Frontman won the $100,000 Legacy Grand Championship Saturday night at the Palm Beach Kennel Club, the richest race in the track's history. But this was not a night to celebrate. With the conclusion of the card, there were only 18 days of racing left until the greyhound track would be forced to close after operating for some 90 years. In 2018, Florida voters approved an amendment that made wagering on dog racing in the state illegal, effectively banning the sport. It goes into effect Jan. 1.

It was the latest and most important victory to date by animal rights activists who have been so successful in their efforts to end the sport that it is close to extinction in the U.S. It is a story of what they are capable of accomplishing and one Thoroughbred racing can ill afford to ignore.

As recently as 2000, there were 45 dog tracks running in the U.S. in 14 states. There were 17 tracks alone in Florida. Once the Florida tracks close, there will be only four greyhound tracks left in the U.S., two of which are slated to close at the end of 2022. The last holdout will be West Virginia, which has two greyhound tracks.

Even Congress has gotten involved with the introduction of H.R. 7826, the Greyhound Protection Act of 2020, which would make it a federal crime to engage in commercial dog racing. Within a few years, the sport will likely have disappeared all together in this country

“The animal rights people did away with the circus, they've done away with us and they're working on SeaWorld,” said Richard Winning, the CEO of Derby Lane in St. Petersburg. “They even were strong enough to get them to take the bars off the front of the box of animal crackers. Animal rights issues are a big thing, especially to the younger generations.”

In some ways, greyhound racing has been its own worst enemy, providing plenty of ammunition for its critics. For decades, thousands of healthy dogs were put down, sometimes in a grisly manner, once their racing days ended. The same fate often awaited other dogs who never made it to the racetrack. In 2002, the New York Times and others reported on the story of a former security guard at a track in Pensacola, Florida who was arrested for the killing of as many as 3,000 dogs. He reportedly was paid $10 each for shooting them after they became too old to race. In 2010, a trainer abandoned 37 dogs after his local track's season ended and 32 of them were later found dead from starvation. As recently as September, two Iowa trainers were banned after videos showed them training their dogs using live rabbits as lures.

The greyhound industry has taken meaningful steps to make sure that homes are found for retired dogs, but it has been a case of too little too late.

“The things we're doing now with animal welfare we should have been doing 20 years ago, 30 years ago, for that matter,” said Jim Gartland, the executive director and secretary treasurer of the National Greyhound Association and the former general manager of Arapahoe Park, a Thoroughbred track in Colorado. “If we had done it then we might not be in the boat we are in now. We should have been weeding out the bad apples, including bad apples that operated the racetracks. That would have gone a long way toward helping our cause.”

Dog racing's biggest adversary has been the organization Grey2K USA, which was founded in 2001 and whose mission is “to pass stronger greyhound protection laws and end the cruelty of dog racing” and says it has more than 250,000 supporters. It recorded its first success in 2008 when Massachusetts voters approved a ballot initiative to end greyhound racing in the state.

“In our case we had the Humane Society and Grey2K fighting us,” Gartland said. “It's a lot easier to do that with a dog than a horse. They'll say 'look at this poor dog, would you do this to your pet?' The way social media is, it was easy for them to spread misinformation. It's so tough to fight that and you better have answers and ammunition at the ready at all times.”

After Massachusetts, one state after another started to fall. According to the Grey2K website, greyhound racing is illegal in 41 states and 40 tracks have shut down since the organization was formed.

It didn't help that wagering on greyhound racing was declining rapidly. Its fan base was growing older and casinos proved to be stiff competition. Another factor was that many track owners were more focused on casinos and alternate forms of gambling than on dog racing, a problem that is familiar to everyone in horse racing. The prevailing wisdom was that some track operators hoped animal rights activists would succeed, which would allow them to continue with their poker rooms, simulcasting operations and, in some cases, slots, without having to hold dog races.

But ending greyhound racing in Florida looked like a hard battle to win. The greyhound industry was firmly entrenched there, seeped in history, and it was responsible for thousands of jobs. After the bill to end the sport was introduced, greyhound interests dug in for a fight.

“We never thought this would happen in Florida,” Gartland said. “Up until the night before the election, before the first votes came in, we were fairly confident that we had it won. All the polls said that we did. We thought we were safe because of the economic impact the sport had and the fact that we had the agriculture side on our side. We had the support of the fisherman, hunters, gun rights groups. The feeling was that if they were going to eliminate dog racing then they could come for hunters, for fishermen and all the rest. We were very confident this wouldn't happen to us and it sure as heck did. We were stunned.”

The constitutional amendment–Amendment 13–passed by a 69-31 margin.

“You go from being angry over the misinformation and the lies and how they went about getting this done to the sadness of realizing that 1,500 of your closest friends are going to be out of a job,” Gartland said. “Some of these people have been doing this their whole lives and it is all they know. They forget about the people side of this.”

With the closing of the tracks, there will be hundreds of dogs that will need homes, but getting them placed is not expected to be a problem.

“I assure you that every dog will find a home,” said Sharon Dippel, who runs GST Sunstate Greyhound Adoption. “We haven't had any problems with adopting these dogs. They are a fabulous breed and they acclimate very easily to home life. They are kind, affectionate, not aggressive and bond to their owners. There won't be any problem getting them adopted out.”

As for Derby Lane, which opened in 1925 and was once frequented by Babe Ruth while he was taking part in spring training, the facility will remain open for poker and for simulcasting. The Palm Beach Kennel Club, the only other track in the state that is still running, will do the same. But for those who have the sport in their blood like Derby Lane's Winning, it won't be the same.

“It's sad to see it go,” Winning said. “We've been racing here for 95 years. The greyhound is the only dog mentioned in the bible. Yes, business has been dropping off slowly. I worry that our sport and, for that matter, horse racing, is like the buggy whip industry. Technology has passed us by. We still have the simulcasting, so we will survive as a business. It's just sad what has happened. Nobody wanted to go out this way.”