Home » Archive » Shared News » The Week in Review: Fountain of Youth, Elusive As Ever

The Week in Review: Fountain of Youth, Elusive As Ever 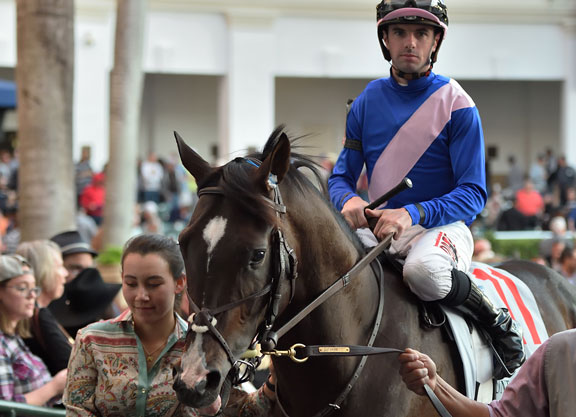 Ete Indien before the Fountain of Youth | Ryan Thompson

The Spanish explorer Ponce de Leon famously got shut out five centuries ago while searching for Florida's mythical Fountain of Youth. He was the heavy favorite to find it, but missing out presumably didn't affect his plans for the first Saturday in May.

In more recent times, well-backed horses on the GI Kentucky Derby trail have been similarly luckless trying to find the winner's circle in the elusive Gulfstream Park stakes that shares the same name. Ete Indien (Summer Front)'s wire-to-wire shredding of the GII Fasig-Tipton Fountain of Youth S. Saturday made it 12 losses in the last 14 runnings for favorites in that prep.

That's an astonishingly high beaten-fave rate considering a good number of the defeated dozen were “headline horses” whose trainers had circled the FOY as the seasonal debut for those top sophomore prospects.

Remember two years ago when juvenile champ Good Magic attempted to launch his 3-year-old campaign in the FOY as the 7-10 favorite? Trainer Dale Romans had a speedball with questionable staying power drawn to the far outside in that 1 1/16 mile stakes, which is a quirky configuration at Gulfstream because the race starts close to the first turn and finishes at the sixteenth pole, tilting the advantage toward early gunners.

That 19-1 long shot was Promises Fulfilled, and Romans instructed his jockey to hustle the speedster straight to the front. Nursing a moderate tempo, Promises Fulfilled held everyone at bay, including the champ, who was third.

Promises Fulfilled never won another two-turn race. But he did mature into a hard-trying MGSW sprinter. Good Magic didn't exactly get derailed by his loss in the FOY, either. He rebounded to win the GII Blue Grass S., then was second in Justify's Kentucky Derby.

That historical perspective might be heartening to Romans, because this time around, he was the one sending out the headline horse who ended up going down in defeat at 1.3-1 odds.

Dennis' Moment had not started since a bad stumble out of the gate cost him all chance in the Breeders' Cup, and Romans acknowledged in the days leading up to the FOY that he was feeling the pressure to prove his colt was worth the high accolades he had been heaping upon him, including ranking “Dennis” right up there with the best horse he had ever trained, Kitten's Joy.

Even their FOY Beyer Speed Figures came back close: Promises Fulfilled ran a 96; Ete Indien a preliminary 97. But Ete Indien finished with more panache, and he cut faster internal splits. He's a streamlined, high-energy colt who was on his toes in the paddock (ears jammed with cotton to keep from reacting to noise), and in pre-race warm-ups this colt was so raring to go it looked as if he might take flight.

Ete Indien's 3-1 win now gives trainer Patrick Biancone an intriguing duo of top-level Derby prospects who each made their first two starts on the turf. Despite grass-centric pedigrees, both have flourished on the dirt, running big-number races against some pretty decent horses. Stablemate Sole Volante (Karakonite {JPN}), the 96-Beyer victor of the Feb. 8 GIII Sam F. Davis S., is on target for Saturday's GII Tampa Bay Derby.

Dennis' Moment, by contrast, was never in it to win it at any point in the FOY. He got mildly shuffled into the first turn, then never looked comfortable with a mid-pack trip. He was backpedaling by the time the field hit the half-mile pole, and has now finished last in two consecutive stakes. His FOY has a too-bad-to-be-true aura to it, and as of Sunday afternoon, the lack of an obvious excuse had Romans mystified.

We're nine weeks into 2020, and one of the oddities on the winningest horses list for North America (ranked by victories, not earnings) is that there are already 31 Thoroughbreds who've achieved three wins at this early stage of the season.

Within that subset, 23 of those 31 are a perfect three-for-three.

The explanation for this spate of undefeated horses likely has to do with the proliferation of short, condition-restricted fields nationwide.

But most statistically strange of all? Those 31 three-time winners are sired by 31 different stallions. That's a pretty neat breadth of bloodstock diversity at the lower levels of the game, where most of these horses compete.

Having paid his $100,000 fine and served his five-year suspension for using an electrical shocking device on a Thoroughbred at Sam Houston Race Park in 2015, Roman Chapa last week regained his riding license.

It's still unclear whether any track will permit the 48-year-old jockey–who pled guilty to a criminal charge in relation to the case, and has twice before been penalized for using an illegal device to frighten horses into running faster–to set foot on their private property.

TDN got an exclusive interview with Chapa on Friday (read it here), but we were left wanting to know more about the circumstances behind the grave injuries Chapa sustained in 2017 when he fell from a horse and was hospitalized in Memphis, Tennessee, for three weeks.

Video footage of an accident at an unregulated “bush track,” plus archived social media posts by his friends and family, suggest Chapa was competing in unsanctioned Quarter Horse match races despite being under a $10,000 surety bond for felony race-fixing charges in Texas.

Illegal racetracks–where the drugging of horses, the fixing of races, and the permissibility of shocking devices are all the norm–are hardly new. The fact that there is zero veterinary oversight for horses and no ambulance service for jockeys who ride them is reason enough to shut these joints down.

You would think these illicit tracks would be hard to find and raid, but they're actually not. Many openly advertise their regularly scheduled match races on social media, and some draw crowds of thousands. They exist primarily in the Southwest, but there are notorious match-race venues outside of Denver, Chicago, and even our nation's capital.

TDN spoke with one longtime racing regulator (under the condition of anonymity because he investigates illegal racetracks as part of his work) to learn more about how outlaw tracks hide in plain sight.

“I know there was match racing going on right outside of Washington, D.C.,” he said. “Who would have thought? Actually, it was a pretty strong network coming up from North Carolina. There's a training center down there that embraces the culture of match racing. They have a lot of big races down there. Those guys would come up to the suburbs of Washington and kick butt over the Virginia guys, because they've been doing it a lot longer down in Carolina.

“I know one story where they had match races outside of Chicago, and some guys from west Texas–the experts, the real pros–they took their horses up there and cleaned house. So the Chicago guys said, 'New rules–everyone now has to go to a test barn after the race.' The cheaters, I guess, got tired of being cheated.

“What a lot of these illegal track operators have done now is pretty smart. They've reverted back to some old mafia ways and they're calling these tracks 'social clubs' so they can control who gets in on the down-low.

“And the funny–or sad–part of it is, these guys often charge $20 to get in. Many legal tracks give away the price of admission–and can barely get a few hundred people to come to the races.

“I happened to be watching match racing on YouTube last weekend, and gosh, they had photo-finish equipment that's up to date. One track even had drone footage. And here we are, in racing commissions all across the country, trying to get updated video technology so stewards can make better decisions in million-dollar races. Some entities don't want to make that investment. Now I can tell them, 'Even unsanctioned match races have better technology.' They're outdoing us.

“We could never get the attention of the local authorities to go in there and get rid of these tracks. I'm not sure if that's because it's part of the culture or what. It's very problematic. We'd rather work with the feds. These tracks are just fronts for a lot of illegal activity.

“We went out to the middle of nowhere a little while ago, on a tip, and could see a match track going up–the grandstands are under construction, the dirt has been moved for the surface, the stanchions for the rail are up. But it's not illegal to move dirt–we have to wait until the action starts. I've been reading our statutes, and it looks like we might have jurisdiction over them related to illegal wagering. So we might take a run at them pretty soon,” the regulator summed up.