Home » Archive » Shared News » The Week in Review: Diminutive Shinny Towers Above Them All

The Week in Review: Diminutive Shinny Towers Above Them All 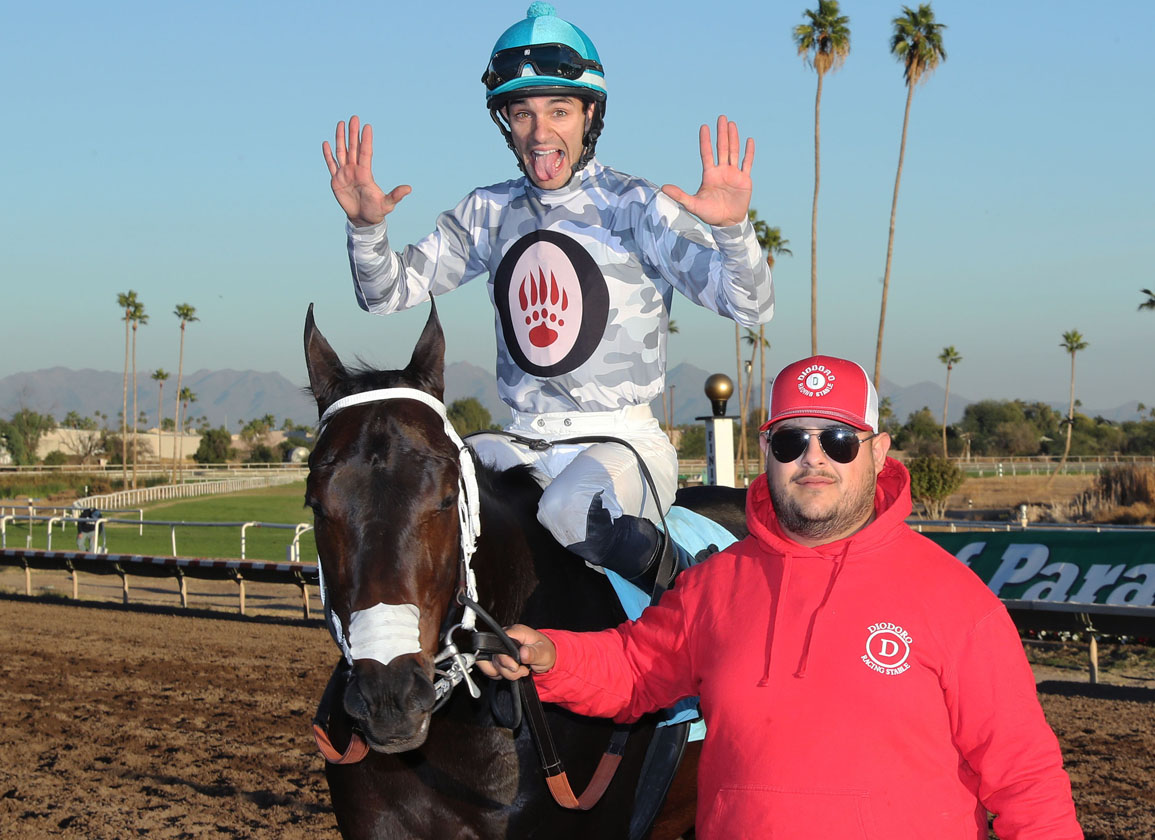 At the start of 2021, Rob Rosette was a Thoroughbred owner without much of a racing stable. His horses went 0-for-2 in all of 2019, and although his only two runners won three races from 10 combined starts in 2020, the prolonged pandemic shutdown of racing in his home state of Arizona made it difficult to stay in the game he had pursued as a hobby for a decade.

But still, back on Jan. 13, Rosette had a brain spark he thought might generate some enjoyment.

Although probably not, as he now recalls, anything even remotely resembling an equine windfall.

“My barn had dwindled down due to lack of racing opportunities, and Turf Paradise was just reopening after COVID,” Rosette told TDN via phone Saturday. “I called my trainer, Robertino Diodoro, and told him I wanted to do something really degenerate. I said, 'You're going to think I'm crazy, but I want to claim a $3,500 non-winners-of-three horse. He's very well bred, and if he wins, we might be getting a horse that we can really have fun with.'”

That low-end claimer was Shinny (Square Eddie), a 4-year-old gelding who was 2-for-8 lifetime. He had been bred in California by Reddam Racing, won his second career start, against open MSW company, on Dec. 15, 2019, at Golden Gate Fields, then backslid in class while migrating to SoCal and later scraping bottom in New Mexico.

After eyeballing Shinny's pedigree, Diodoro told Rosette he had heard crazier ideas, so he agreed to drop a claim slip on his client's behalf.

Shinny won that day, meaning the gelding was fresh out of lifetime conditions for his new connections. But the low claiming price he ran for would make Shinny eligible for almost any starter-allowance spot in the country, which had been part of the appeal.

Ambitiously, Rosette and Diodoro next entered Shinny for an $8,500 tag, more than double his just-claimed value. The bay pressed the pace in a 6 1/2 -furlong sprint and ended up second, beaten only a neck.

Flipping through the Turf Paradise condition book, Rosette suggested to his trainer that , “They've got this race where you can enter a starter-allowance if they haven't won on turf. And with that breeding, let's give it a try.”

Diodoro agreed, and the gelding went off favored at even money going 7 1/2 furlongs on the lawn.

“And man, he crushed them by 6 1/2 lengths,” Rosette said. “From there, I was like, let's keep him in these conditions and have fun.”

Shinny next ran sixth in an Apr. 7 optional claiming/1x allowance spot. But he won his subsequent start Apr. 16 for win number three on the year.

The determined gelding hasn't lost since. Shinny has now hit the winner's circle in 10 straight outings after summering at Canterbury Park in Minnesota then returning to Arizona.

When he rallied into a slow pace to win with an explosive burst up the rail Dec. 17 at Turf Paradise, the victory vaulted him to the top of the winningest horse list in North America for 2021. Among the 46,064 Thoroughbreds to have made at least one start this year, the diminutive Shinny towers above them all with 12 wins.

“Along the way, something went right with Shinny,” Rosette explained, the sense of respect for the gelding evident in his tone. “Something just clicked in his head. He's such a tiny little thing, and it looks like he's going to lose every race. But three, four jumps before the wire, something happens with him where he just accelerates and he takes off.

He told Diodoro midway through the season, “Let's don't get too ambitious with him, and just see if we can keep having a little fun.”

Rosette is no stranger to a rags-to-riches metamorphosis. A Chippewa-Cree tribal member who grew up in a single-wide trailer just outside the Rocky Boy's Indian Reservation in the Bear Paw Mountains of northern Montana, Rosette struggled to make ends meet for his wife and children while putting himself through law school at Arizona State University in the early 1990s. He now devotes his professional life as an attorney to helping tribal entities, and the Phoenix law firm he founded in 2005 has grown to offices in four states and in Washington, D.C.

“I give Shinny's credit to three things,” Rosette said. “I think the horse has figured out what he's doing. He has fun and takes care of himself. I think Robertino and his team are having fun, and they take care of the horse, with the right entries and staying where he should be. And then Lindey Wade, the jockey–I talk to him a lot and we've drawn a little bit closer–and man, does he love Shinny. And he told me the same thing, 'This horse has grown on me, where I take care of him, and he just kind of takes care of himself, and we're all having a blast.'”

There is technically one other Thoroughbred in North America who has hit the winner's circle 12 times this year: Six Ninety One (Congrats), a 9-year-old starter-allowance stalwart who, like Shinny, is also based in Arizona.

The speed-on-the-lead sprint specialist has won 10 races from 19 starts strictly against Thoroughbreds. But trainer Alfredo Asprino, who owns the gelding in partnership with Jesus Vielma, also saddled Six Ninety One to a 2-for-2 record in Quarter Horse dashes. That brings his record to 12-for-21 this year, but it only counts for bragging rights, because Equibase doesn't mix victory and earnings totals between the two breeds.

Greely and Ben (Greeley's Conquest), currently at 11 wins, is the only other Thoroughbred with a realistic chance to match Shinny's total as 2021 draws to a close. The 7-year-old is owned and trained by Karl Broberg (End Zone Athletics), and although this gelding, too, took advantage of ripe pickings at starter-allowance levels throughout the year, Broberg has entered Greeley and Ben against tougher stakes company the last two starts (a win and a second).

When TDN called Broberg Saturday, he said he was leaning toward entering Greeley and Ben next in the five-furlong $75,000 Sam's Town S. at Delta Downs Jan. 8. But when informed that Shinny just won No. 12 the day before, Broberg deadpanned, “Now you're going to make me squeeze in a starter-allowance before the end of the year.”

But he's not kidding.

“I'm undecided. If the right race hits us somewhere, I'm all about it,” Broberg later added.

Broberg, the nation's winningest trainer by overall victories between 2014-19, has only once had an individual horse in contention for most-win honors despite the large scale of his stable, which operates at numerous tracks throughout the South and Midwest.

“It's always on my radar,” Broberg said. “It's kind of interesting to see what horse has knocked out the most wins in a year. I think it's cool and I always look at it, regardless of whether or not I have a horse up there. But at no point has it ever been a goal or something that was a concerted effort, like, 'I need to do this.' It's one of those things that just has to happen for you.

“I've been watching [Shinny]. I thought I had [winningest horse honors] put away safe, and then that Diodoro horse just kept winning,” Broberg said. “I don't even understand how they're even able to fill that race he keeps winning.”

Shinny and Greeley and Ben are on opposite ends of the spectrum physically–Broberg's gelding is a brawny 1,200-pounder, while Rosette's runner can be kindly described as small but scrappy. They're also worlds apart as far as their racing histories are concerned–Shinny was barely earning his keep at Zia Park, while Greeley and Ben shared early-career company lines with horses who ran in the Triple Crown and Breeders' Cup. Yet both Rosette and Broberg chose the word “blessed” when describing their feelings about their respective standings-toppers.

“It's really been a blessing for me as an owner,” Rosette said. “I used to be just happy winning three or four races a year. And to have a horse win 12 races for me, it's been remarkable. Every time out, I keep thinking it has to end. He can't win forever. But as Lindey says, 'He just finds another gear and he's gone.' He's such a great horse. We're going to keep him as a pet forever.”

Rosette's appreciation for Shinny extends beyond the win streak. He detailed how the gelding has changed his life as an owner of other racehorses, primarily because of the roughly $100,000 in purse earnings Shinny has pulled in since being claimed.

“So now I became a stakes owner. After the win, I'm sitting in the stall with this trophy and this gigantic, massive horse and everyone's admiring Tiger Dad. But I said, 'See that skinny, little horse Shinny down there? He's the one who made this possible. He's the one who paid the bills to make this happen.'

“And then the other thing we did is we bought a 2-year-old at auction. I would have never spent money like that,” Rosette said. “That 2-year-old is now at Oaklawn with Robertino, because he said she was good enough to go there. So now, Shinny has built on his back–I wouldn't say a legitimate stable–but we've got two starters now that are legitimate horses that I never dreamed of having.

“I tell you, I really owe it all to this little 4-year-old gelding,” Rosette said. “I sometimes think of changing my stable name from Rosette Racing to Shinny Stables.”