Home » Archive » Shared News » The Week in Review: Crashing the Sports Betting Party Before It Even Starts

The Week in Review: Crashing the Sports Betting Party Before It Even Starts 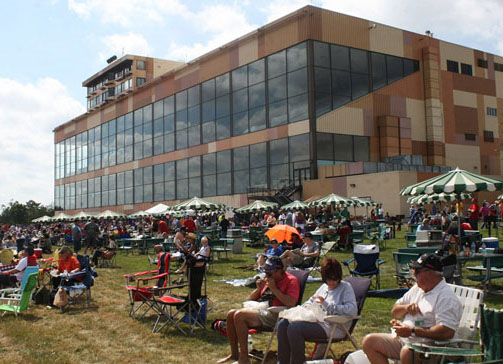 Parx Racing, a notable racino, that could one day be in the sports betting market | Horsephotos

It's been a week now since the Supreme Court of the United States struck down a federal law barring wagering on team sports, blasting open a legislative void for individual states to pursue, regulate and profit from legal sports betting.

Racetrack operators nationwide, largely hoping they will be entitled to an outsized share of the sports betting revenue stream while envisioning their sparsely populated grandstands as the perfect place to hatch a new paradigm in American gambling, are celebrating this landmark victory by partying like it's 1993.

Why 1993? Because that's roughly the start of what would come to be known as the U.S. racino era. You remember those heady days from a quarter-century ago, when tracks on the verge of sliding off the Thoroughbred grid were seemingly thrown a statutory lifeline in the form of purse subsidies from electronic and casino gaming.

But as more and more states got in on the act, the initial giddiness of racinos as saviors of the sport waned to the point where now, 25 years later, too many racetrack/casino marriages are either strained, fractured, or–at the very least–are in need of serious relationship counseling.

While tracks in some states have indeed bolstered their short- and medium-term racing products as a result of expanded gaming, in too many jurisdictions the long-range outlook for purse subsidization remains volatile. How many racinos nationwide, give you a strong sense that they “do it right” in terms of not cannibalizing the racing aspects of their businesses while engaged in the lucrative pursuit of more and more gaming? Certainly not more than a handful.

Most everywhere else, to some degree, the corporate burden of horses running counterclockwise in circles is tolerated by operators (and states) as a necessary annoyance required by law to maintain gaming licensure.

Dates have been cut, purse subsidies have been clawed back, and (with a few noteworthy exceptions) there is little incentive to sink money back into racing-related investments. We're not too far away from the day when some early adopters of the racino model will be willing to pay large, one-time, upfront severance sums to get their racing “partners” to go away entirely.

Now, with sports betting looming as a reality, the proverbial new blood is in the water and every shark in the racetrack/racino/casino ocean is circling the Supreme Court's decision for a taste.

There will be no lack of corporate suitors willing to form “alliances” with racetracks in case states give statutory preference to sports wagering at tracks. But 25 years from now, will we look back on this era too, and question whether the racing industry should have been doing more to solidify its own sport instead of trying to use another form of betting as a crutch?

Make no mistake, the state of New Jersey ($9 million in legal fees) and Monmouth Park ($2 million in infrastructure preparation) gambled hugely on winning a quixotic, long-shot Supreme Court battle that, as recently as one year ago, few legal experts thought would even be heard by the nation's highest court, let alone won by the underdogs.

The inertia for pushing this case all the way to the Supreme Court was provided by co-plaintiff New Jersey Thoroughbred Horsemen's Association, whose advisor and attorney, Dennis Drazin, is also the chairman and chief executive of Darby Development LLC, which operates Monmouth. And now that Drazin and New Jersey have beaten the professional and collegiate sports leagues by having the Professional and Amateur Sports Protection Act of 1992 (PASPA) declared unconstitutional, they will likely enjoy first-to-market status for sports betting outside of Las Vegas.

But in any industry or endeavor, being first to market is not a reliable indicator of success or staying power over the long haul. Entities that come online with a concept a little bit later down the road usually have the advantage of correcting the inevitable mistakes made by pioneers, and a third wave of revisionists is usually willing to pay a premium for being late to the marketplace if it means being able to cherry-pick the best strategies, locations and platforms.

Racetracks will try to make the case to legislatures that they are ideal locations for sports betting because they are existing, licensed gambling facilities. This was a popular argument at the dawn of the racino era, when the internet was not widely accessible. But it's a weak plank now considering how society is used to the convenience and (relative) security of transacting online and via mobile devices.

You don't see the country's major stock exchanges (which are essentially massive betting platforms) doing the bulk of their business via trading pits and brick-and-mortar brokerages any more because it's impractical, inefficient and not what customers want. Similarly, any attempt by racing entities to hoard that initial on-track-only status by trying to keep sports gambling from expanding beyond a track's physical borders would be shortsighted.

Mobile/online sports betting might be a little further down the timeline here in the U.S., but it will eventually evolve into the preferred and dominant format (until some other means of communicating and transacting that we cannot yet conceive of gets invented).

Thus, the first-to-market rush among tracks wanting in on brick-and-mortar sports betting shouldn't happen at the expense of having well-thought-out legislative infrastructure in place to accommodate emerging, “next big thing” concepts (like in-race or in-game wagering and betting exchange formats) that will be the real sports betting money-makers in the not-too-distant future.

Without that foresight, racino-era history will repeat itself all across the Thoroughbred landscape. Except this time around, those racetracks that bet solely on brick-and-mortar sports betting will be bemoaning the fact that their sports books are in need of subsidies because they've become just as empty as their trackside grandstands.