The Week in Review: Clout Heading into Classic, Older Horses or Upstart Sophs? 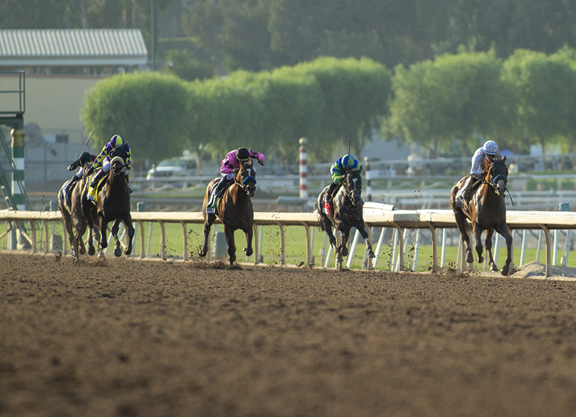 We're now inside the six-week mark for the GI Breeders' Cup Classic. Is your money on an older horse winning the season-capping dirt route championship race or one of the 3-year-olds?

Both divisions have a respectable upper crust of candidates. Neither age group has a dominant, standout star who towers over his peers.

Improbable (City Zip)'s last-to-first, 4 1/2-length shakedown of the GI Awesome Again S. field at Santa Anita this past Saturday nudged him into tepid early favoritism for the Classic. The Oct. 10 GI Jockey Club Gold Cup at Belmont Park looms as the final Grade I dirt route for males prior to the Breeders' Cup. But this season, the pandemic has given us the unique plot twist of the GI Preakness S. falling five weeks out from the Nov. 7 Classic, and Saturday's concluding Triple Crown event will likely be the more impactful race of the two in sorting out the pecking order for the Breeders' Cup.

Older horses have won 24 previous Classics; sophomores 12. In the 21st Century alone, the 2:1 ratio is roughly the same (14-6). Older horses have won the last three Classics (Vino Rosso, Accelerate, Gun Runner). But the three years prior to that were swept by a Bob Baffert-trained soph power trio (Bayern, American Pharoah, Arrogate).

So let's start with Baffert first, because this year he's holding a balanced hand of both older horses and 3-year-old threats for the Classic.

Baffert trainees ran one-two in the Awesome Again, with 9-5 second choice Improbable benefitting from an ideal speed setup that involved stablemate Maximum Security (New Year's Day), the 1-2 favorite, committing to prominent placement behind a 59-1 pacemaker. 'Max' was always under pressure and sandwiched between horses while bumping and grinding in stalk mode for most of the trip. But he clearly did not have the requisite gear in reserve to put up a serious stretch battle when confronted by Improbable's quarter-pole surge.

Improbable has now won three straight Grade I routes with triple-digit Beyer Speed Figures in each, and this colt appears to be rounding into form akin to what bettors envisioned when they sent him postward as the 4-1 chalk in last year's GI Kentucky Derby. He was moved up to fourth in the wake of Maximum Security's controversial DQ that day, and has since overcome habitual unruliness in the starting gate to blossom over nine and 10 furlongs after attempts to campaign as a miler didn't pan out.

But Improbable hitting the road for the Breeders' Cup at Keeneland might be a different proposition than the Improbable who relishes his home track at Santa Anita. He's 3-for-4 there lifetime, and Baffert said post-race Saturday that, “This horse loves this track. He seems to be better in the gate here. That's why we ran him here. Elliott Walden [the president and CEO of Win Star Farm, a co-owner of the colt], it was his idea to keep him here because we don't have to ship.”

While Maximum Security (10-for-13 lifetime) didn't win, he was hardly disgraced in defeat. The colt is now three races into what is widely considered the second phase of his career, and the closely watched line of demarcation for this $16,000 maiden-claimer turned 3-year-old champ is his March transfer out of the barn of trainer Jason Servis, who is facing federal charges for allegedly using performance-enhancing drugs on racehorses.

The feds have Servis recorded via wiretap allegedly discussing (among other things) a 2019 doping regimen for Max, so his performance at age four is unquestionably being viewed through the prism of how much of his past prowess was attributable to illicit pharmaceuticals.

The verdict so far since moving into Baffert's barn? Yes, Maximum Security has two wins and a second from three graded stakes starts in SoCal. But his far-turn blast-offs don't ripple with the same raw, kinetic energy that Max flashed so brilliantly at age three. The visual impression he leaves now is of a hard-trying horse who still sustains a high cruising speed without backing away from fights–yet absent the palpable swagger and spark that once enabled him to swat away late-race attacks from A-level competition with ease.

On the sophomore side, Baffert also conditions Kentucky Derby victor and Preakness favorite Authentic (Into Mischief), who picked an ideal time to mature from a colt who had focusing issues into a front-running force capable of carrying his speed over 10 furlongs. Baffert will also send out Thousand Words (Pioneerof the Nile) in the Preakness. That million-dollar KEESEP colt was a late Derby scratch after flipping in the Churchill Downs paddock, and he resonates on paper as the quintessential “other” Baffert dark horse who could go off at a juicy Preakness price with all of the attention focused on Authentic.

Art Collector (Bernardini) figured to be the second favorite in the Derby before being forced to scratch the week of the race with a minor foot injury. He should emerge as the second favorite in the Preakness betting behind Authentic, and having the extra time between his last prep (an Aug. 9 win in the Ellis Park Derby) and the concluding jewel of the Triple Crown could end up working out in his favor for both the Preakness and beyond. Looking ahead to the Classic over the Keeneland surface, it's worth noting that one of the best races in Art Collector's past-performance block is his GII Toyota Blue Grass S. win there July 11.

Of course, the top 3-year-old Classic threat from an overall body of work standpoint remains Tiz the Law (Constitution). Even though he ran second in the Derby behind Authentic, 'Tiz' hardly ran a losing race–he sat a perfect stalking trip and uncoiled on cue, but genuinely seemed surprised when Authentic slugged back at him with ferocity in their stretch brawl. Trainer Barclay Tagg opted out of the Preakness to instead aim for the Classic, and he'll head to Keeneland with a mature, confident aggressor who carries himself with panache and knows how to make his own breaks.

Other older-horse Classic candidates include Tom's d'Etat (Smart Strike), who won four straight stakes before losing to Improbable in the GI Whitney S.; Code of Honor (Noble Mission {GB}), who is expected for Saturday's GII Kelso H. at Belmont, and By My Standards (Goldencents), who has a 4-2-0 record from six starts this year with three Grade II wins going long.