The Week in Review: Charlatan Ran a Huge Race in Saudi Arabia 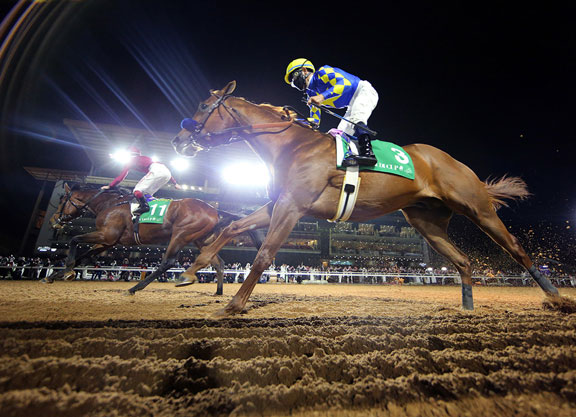 He did not win Saturday over in Saudi Arabia, but Charlatan (Speightstown) proved that he is undoubtedly the best dirt horse in America. That's how well he ran in his one-length defeat to Mishriff (Ire) (Make Believe {GB}) in the $20-million race.

It was by no means a surprise that Charlatan and Knicks Go (Paynter) got caught up in a speed duel. Both are talented horses with abundant early speed and jockeys Joel Rosario (Knicks Go) and Mike Smith (Charlatan) rode aggressively, perhaps because neither rider wanted to see their rival get off to an uncontested lead in what many assumed was a two-horse race.

No official fractional times for the race are available, only a final time of 1:49.59 for the mile-and-an-eighth. But a hand timing of the race using video timing revealed that the six furlongs went in 1:10.7. Considering that there was no run up to the race, the six-furlong time would be more like 1:09 and change for a comparable race run in the U.S.

That means that Charlatan dueled with Knicks Go through a very fast three-quarters, while Mishriff got the perfect trip, stalking the two leaders from third. And he did so on a track that may have been biased toward outside closers. Speed didn't hold up in any of the dirt races Saturday and all of the winners were well off the rail in the stretch.

Knicks Go, a very good horse, couldn't handle the pressure. He was done on the turn and wound up finishing fourth, beaten 8 1/2 lengths. Not so for Charlatan. He was still battling Mishriff with 100 meters to go in the race and didn't let the other horse get by him until a few jumps before the wire. The pace was fast, Charlatan never got a breather and then he was caught by a horse who had a perfect trip while racing on the best part of the track. This may have been his best race.

“He ran a big race,” trainer Bob Baffert said Sunday morning. “He put away Knicks Go, just ran him down, turned in a gallant effort and it's too bad he got beat. That's a demanding track. The stretch is so long, and he ran hard. It was an exciting race and I would have loved to have won it, but I was afraid of a speed duel between him and Knicks Go. They locked horns after a half-mile and really picked it up the second quarter. But the way he ran, it shows what a brilliant horse he is. He put away a really good horse [in Knicks Go].”

Charlatan's Saudi Cup performance was reminiscent of the 1978 GI Jockey Club Gold Cup, in which Seattle Slew lost after a heroic effort. He dueled with Affirmed and Life's Hope through fractions of 22.60, 45.20 and 1:09.40. The pace finished Affirmed, whose saddle slipped, and Life's Hope, but not Slew. Meanwhile, Exceller had a perfect off-the-pace trip, but Seattle Slew never gave up and lost by just a nose.

That's not to say that Charlatan is another Seattle Slew. He needs to do a lot more before he can be compared to one of the sport's all-time greats. But his effort in the Saudi Cup was nothing short of terrific.

Maximum Security: The Check Is Not in the Mail

Prince Bandar Bin Khalid Al Faisal, the chairman of the Jockey Club of Saudi Arabia, told the audience for the Saudi Cup that he hoped there might be a resolution on the Maximum Security (New Year's Day) case shortly. Because of the indictment of his trainer Jason Servis and the ongoing investigation, owners Gary and Mary West and Coolmore have not received the $10 million that goes to the winner.

Prince Bandar said that he had been informed that a decision on Servis would come in about six weeks. It was an odd position to take since the case figures to wind through the system for months to come and even the U.S. Jockey Club has received no information concerning a rapid resolution to the case. It seems highly unlikely that the Servis matter will conclude any time soon or that the Saudi authorities would have inside information related to when there will be a decision.

The Prince has said that if U.S. authorities determine that Maximum Security raced on performance-enhancing drugs within six months of the 2020 Saudi Cup he will be disqualified. The FBI's investigation into the alleged doping of horses and the subsequent indictments include evidence that Maximum Security did receive SGF-1000 under Servis's care, administered in the hope of performance enhancement.

Jockey Club Gold Cup Is On the Move

As strange as it will seem to have the GI Jockey Club Gold Cup, first run in 1919, held at Saratoga, NYRA might have saved the race by moving it upstate.

It will now be run eight weeks before the Classic, which should restore it as a major prep for the Breeders' Cup.

NYRA has yet to announce the stakes schedule for the fall meet at Belmont, but it appears that the GI Woodward S., run at Saratoga since 2006, will move into the Gold Cup's old spot on the calendar. That could mean that race will struggle to get top horses. By switching the two races around, NYRA chose to protect the Gold Cup over the Woodward. Considering the history of the race, it's the right call.

Mattress Mack Deserves to be Honored

That Jim McIngvale has opened up his store to those seeking shelter, heat and food in the aftermath of the storms in Houston doesn't really have anything to do with horse racing. But that doesn't mean that the horse racing industry shouldn't honor him. Mattress Mack has repeatedly gone above and beyond when it comes to helping out the people of his favorite city, Houston.

The Eclipse Award of Merit is given to someone who has displayed outstanding lifetime achievement in, and service to, the Thoroughbred industry. That should include people whose work outside of the sport has been exemplary, shining a positive light on racing. That's exactly what Mack has done. There should be an Eclipse Award out there with his name on it.