Home » Archive » Shared News » The Week in Review: Can Virtual Racing Fill the Void for Horseplayers

The Week in Review: Can Virtual Racing Fill the Void for Horseplayers 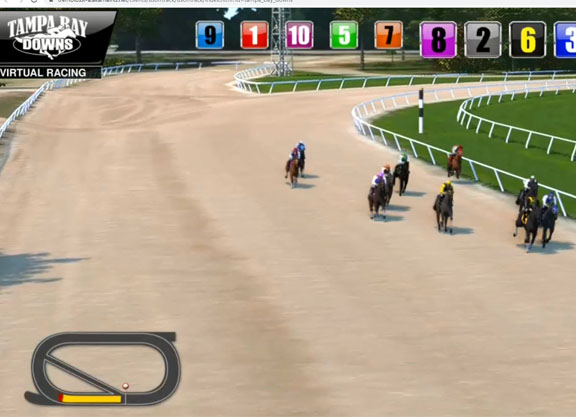 Still another track, Golden Gate Fields, was forced to stop racing last week, leaving only a precious few wagering opportunities for action-hungry horseplayers. But more betting opportunities are on their way–even if they aren't necessarily the real thing.

Wagering on virtual horse races is now being offered by three ADWs and more are expected to come on board soon. The contestants are computer generated horses or greyhounds that dart across the screen in real time, battling it out against one another to see who gets to the wire first. Virtual wagering was launched in the U.K. in 2001 and has grown in popularity to the point where it now accounts for about 25% of the wagering at the corner betting shops. Perhaps American horseplayers will prove to be more discerning, but, with the coronavirus having shut down dozens of tracks, virtual racing has never been in a better position to catch on here.

The U.S. version is different from the U.K. version. The races overseas are conducted at fictitious racetracks with fictitious horses. An algorithm is used to determine the outcome, with the lower-priced horses winning more often than the higher-priced ones. The odds are fixed.

The U.S. races are recreations of actual races. Only the names of the horses, their silks and their program numbers have been changed so no one can look up the results beforehand. Friday's first virtual race from Tampa Bay Downs was won by “El Martillo,” the virtual version of an actual horse who would have won a “real” Tampa Bay Downs race at some point in time. Even the backdrop of the races is meant to mimic the track at where they are taking place as the sights and sounds are meant to duplicate the real racetracks.

The other primary distinction between the U.S. and U.K. models is that the betting on virtual races here is done on a pari-mutuel basis. The takeout is 22%. With only a handful of ADWs taking the virtual races so far, the pools are small and the payoffs can seem bizarre. In one Tampa race a $2 quinella returned $96.60, while a $1 superfecta on the same race paid $10.60.

The races from Tampa go off every 10 minutes and a “card” consists of 20 races.

“We see this as a simulcasting product rather than a gaming product,” said Lorilee Goodall, Director of Business Development for the Florida-based company US Off-Track, which is licensed to market and distribute the virtual races in the U.S. “The only difference is that these are not live animals you are watching. They are virtualized.”

With the virtual races being recreations of past live races, there is some rudimentary handicapping information available, which isn't the case in the U.K. Horses are given stars depending on how many times they have finished in the top three in their last starts. The horses with the most stars should have the best chances of winning.

Currently, the only Thoroughbred track virtually offered is Tampa Bay Downs, but Goodall said more tracks are likely to come on board soon, including Hawthorne. There are also races from three greyhound tracks. Not unlike a normal simulcast signal, US Off-Track pays the tracks a fee for allowing it to take betting on their “races.”

The key to success will be getting the major ADWs, like TwinSpires, NYRA Bets, TVG and Xpressbet, on board. That would open the races up to tens of thousands of new players and, likely, create the kind of liquidity that is needed in the pools for someone to feel comfortable making a bet of more than $2.

“If someone is out there and their ADW is not taking it, ask for it,” Goodall said. “But all the ADWs are very familiar with the product and they have taken a look at it.”

Virtual racing will never replace the real thing. Even as popular as it is in the U.K., most players wager on it only when there is a downtime and no real racing available. But will people here gravitate to betting on anonymous computerized horses? People are home. They want something to bet on. Virtual racing might just catch on.

A virtual Kentucky Derby? Why not?

After the Grand National was canceled due to the cornonavirus, it was decided to hold a virtual race in its place. The virtual race turned into a pretty big deal. It was broadcast on television and bookmakers throughout the U.K. were taking bets on it. The bookmakers agreed to donate all profits from the race to charity. Betting on the race was so robust that £2.6 million was donated to NHS Charities, which supports the U.K.'s publicly funded health care system. A total of 4.8 million watched the race, which was won by the 18-1 shot Potters Corner, who defeated “favorite” Tiger Roll, who finished fourth.

“I'm delighted, it's great and great to cheer everyone up in tough times. I think even people from outside of racing were tuned in,” said Christian Williams, the trainer of the real Potters Corner. “It was something for people to cheer on, people are stuck in their houses and it probably got a good viewing. It was something to watch together and have a bit of banter leading up to it.”

There will be a real GI Kentucky Derby this year, but it won't be held on its traditional date of May 2. So why not do what the British did? How about a virtual Kentucky Derby to be run on May 2, with betting and with a field that closely resembles the 20 real horses that would have contested the race. Donate the profits from the betting, put the “Virtual Derby” on NBC. It could be a lot of fun and provide much-needed funds for a number of charities.

Racing at Santa Anita remains in a holding pattern as The Stronach Group (TSG) is trying to convince county health department officials to let racing resume there. TSG has done everything in its power to bring back racing, including buying a full page ad in the Los Angeles Times in which Belinda Stronach called for the resumption of the sport.

“Horse racing is a delicate, circular ecosystem and to destroy that now will lead to an unnecessary humanitarian and animal-care crisis on top of what we are all already dealing with,” she wrote.

In the meantime, Los Alamitos has stayed open, even after Santa Anita, Golden Gate and the Cal Expo harness track have had to close. That raises the possibility of Los Al, TSG and the California Horse Racing Board working together to shift Thoroughbred racing temporarily to Los Al.

That's not an ideal scenario, especially for TSG, and who knows how long Los Alamitos will be allowed to race? But moving the Thoroughbreds over to Los Al might be the solution that gets Thoroughbred racing going again and make it possible to run a race like the GI Santa Anita Derby, which is now in limbo.