Home » Archive » Shared News » The Week in Review: At Saratoga, So Much for Conventional Wisdom

The Week in Review: At Saratoga, So Much for Conventional Wisdom 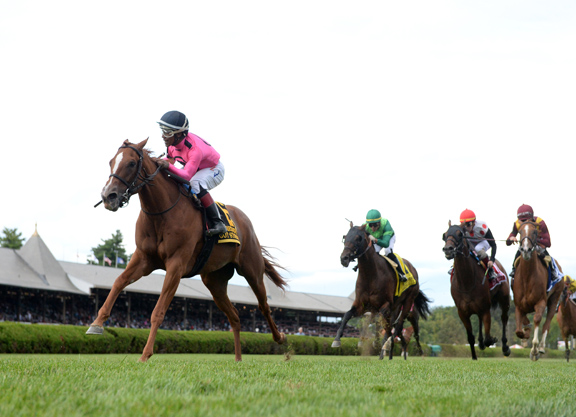 In an era in racing where trainers can't space the races for their horses far enough apart, Mark Casse was setting himself up to look foolish when he dropped Got Stormy (Get Stormy) into the entry box for the GI Fourstardave H. It wasn't just that he was running a filly against boys, he was running her back off one week's rest. Seven days earlier, she had romped in the Fasig-Tipton De La Rose S. Most anyone else would have backed off and looked for a race five or six weeks down the road.

But it was actually owner Gary Barber who had other ideas. The Fourstardave is a $500,0000, Grade I race and is a “Win and You're In” race for the GI Breeders' Cup Mile. The horse was not nominated for the race, so Barber had to pay a $7,500 supplementary fee to enter, but that was not nearly enough to discourage him. Casse didn't really want to run. Barber did.

“I said, 'Honestly, I've never seen her train so good,'” Casse explained when asked what he told Barber prior to the race. “He said, 'We're running.' I wish I could say I was the smart one, but it was Gary Barber. He's not afraid to step out of the box.”

Got Stormy won by 2 1/2 lengths, set a new course record (1:32) for the mile run over a firm turf course, made $275,000 and is now guaranteed a spot in the Breeders' Cup Mile. That's the same race that Casse also won with another filly, Tepin (Bernstein), in 2015. Got Stormy has a way to go before she can be compared to Tepin, but she took a huge step forward in her career Saturday. All thanks to an owner, and, in some small part, a trainer, who weren't afraid to take a chance in a game where almost no one takes any chances anymore.

Some 30 minutes earlier, a field of seven 2-year-olds went to the gate for the GII Saratoga Special S. Only one was not on Lasix, Green Light Go (Hard Spun). The 2-year-old is owned by Stronach Stables. Looking very much like a star in the making, Green Light Go won by 3 3/4 lengths.

Trainer Jimmy Jerkens said that the Stronachs have told him not to run their first-time starters on Lasix. Other than that, he can do whatever he feels gives the horse the best chance to win. With Green Light Go, he saw no need to use Lasix for his second career start.

“A lot of their horses ultimately run on Lasix, but I know deep down they'd rather they not run on it unless it is necessary,” Jerkens said. “With this horse, if it looked like there was a reason for it we would have used it. If he had actually ever bled, yes, we would have used it. They leave it up to me. If you have a horse that runs good without it, it has to help them overall. Bleeding is certainly no good. But if you don't use Lasix there's got to be a lot more left in the tank running without Lasix than with it. They think horses last longer and it's better for them in the long run if they don't run with it. You can't argue with that.”

Of the 95 horses that started at Saratoga Saturday, eight ran without Lasix and all were 2-year-olds. The non-Lasix angle produced another winner as the Christophe Clement-trained Decorated Invader (Declaration of War) won a maiden special weight race on the grass without Lasix.

The Impact of the Saudi Cup?

It will be interesting to see how the new $20 million race scheduled to be run Feb. 29 in Saudi Arabia will affect the schedules of America's top horses. One possibility, and the best-case scenario for the sport, would be that it will lead to more horses staying in training rather than retiring to become stallions. Throw in the GI Pegasus World Cup and the G1 Dubai World Cup and there will now be $41 million in purse money available to a horse over just a two-month window. That's a pretty strong incentive to stay in training.

Anyone sweeping the three races would be more than well rewarded, but doing so would be a monumental task and many owners and trainers may choose not to bite off more than they can probably chew. Not only does it involve racing three times within two months, it would require an extraordinary amount of travel. Gulfstream Park is about 7,500 miles from Riyadh, Saudi Arabia. Then you'd still have to get to Dubai, through that's only about 535 miles from Saudi Arabia, and then head back to the U.S.

The Pegasus will likely still get the horses who are scheduled to go off to stud, as the Jan. 25 date makes it possible to race one last time for big money before starting a career as a sire. But if someone is planning on keeping a horse in training, the Pegasus could be the odd race out. Not only does it have the smallest purse of the three races at $9 million, but anyone wanting to run has to pay $500,000 to earn a spot in the field. That's not the case with the other two races.

It might just be easier to pass the Pegasus, ship once to the Middle East, and run for a total of $32 million with the two races four weeks apart. If you're going to go over for one, you might as well go for both.

A Super Saturday for Chad Brown

Something to Add to the Jockey Club Round Table Agenda

Though people get frustrated that after so many ideas are exchanged at the annual Jockey Club Round Table Conference nothing ever seems to get done, the annual gathering in Saratoga is a valuable resource for the sport and occasionally does move the needle in one direction or the other. On Sunday in Saratoga, the industry group tackled many of the most important issues facing the sport today, mainly horse safety and lessons in crisis management.

The one thing the Round Table does not do enough of is look at issues that relate to the bettor, and there's one out there that keeps popping up that leads people to question the integrity of the pari-mutuel system.

XBTV's Jeff Siegel tweeted last week about another one of those last-second, massive-odds drop on a winner. According to Siegel, when the horses were loading for Thursday's fourth race at Del Mar, a horse named Zipper Mischief (Into Mischief) was 9-1. The horse won for fun and was, lo and behold, 5-1, when crossing the wire. As is usually the case when something like this happens, one of the computer “batch” bettors, who are able to bet a milli-second before the wagering closes and get huge rebates, likely believed–and was right–that Zipper Mischief was an overlay at 9-1.

It's understood that this is not fixed-odds betting, but the constant and significant odds changes that come in after 99.8% of the public has made their wagers have made it where you are betting without having any idea what the price on your horse is going to be. That's a betting system people can't trust and if people can't trust the pari-mutuel system, they're not going to bet anymore. You also have a situation where people are betting on winners and end up angry and feeling ripped off. Winning feels like losing.

There's got to be a better way, and the issue has been dealt with in other countries. Let's hear what the experts have to say and why this is happening. This would be a perfect subject for the 2020 Round Table.