The Week in Review: Arazi's 'Move' Long Outlives His Hype 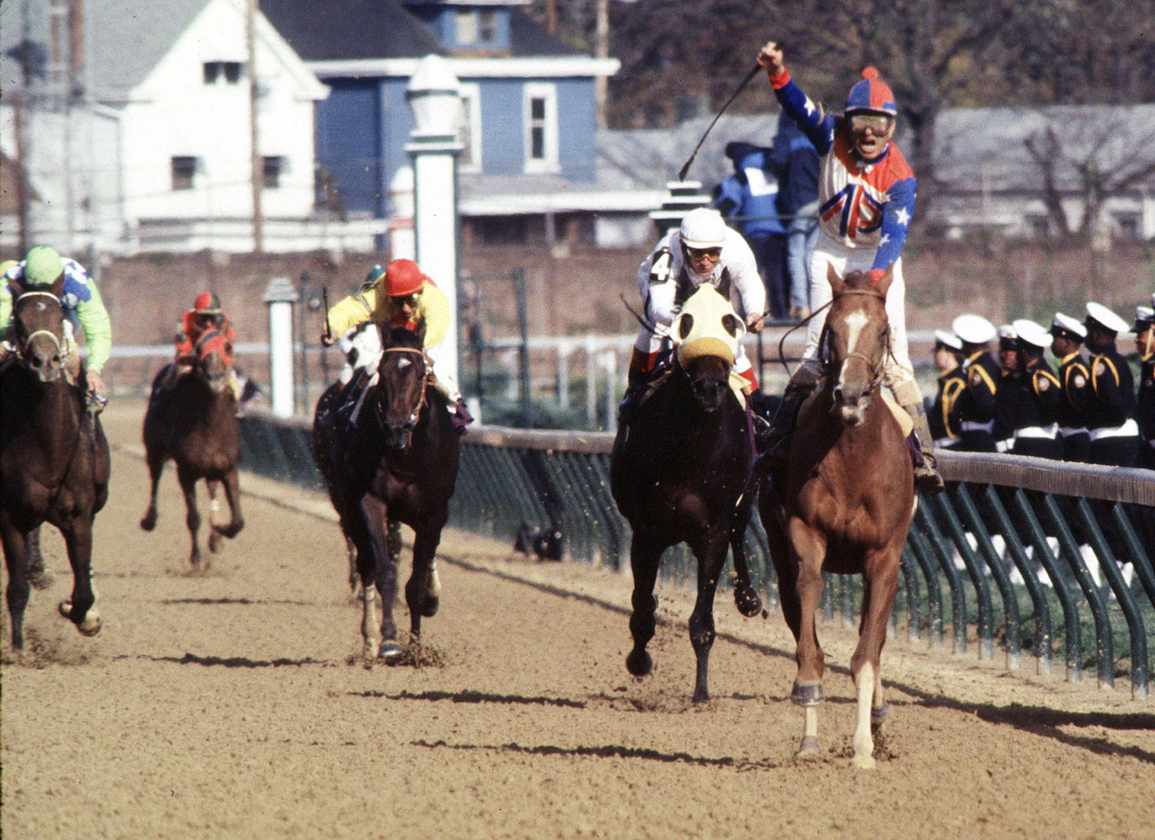 Off the top of your head, how many Thoroughbreds can you name who have been immortalized by having their characteristic in-race “move” named after them?

Only three leap to mind for me: The “Silky Sullivan move” was coined in the late 1950s in honor of a California fan favorite who made a career out of lagging far behind and closing with a flourish, sometimes from more than 40 lengths off the pace. This phrase made its way into the lexicon of other sports and even American politics to signify an improbable victory under last-to-first circumstances.

A generation later, Secretariat's audacious seizure of the lead, rocketing from sixth to first through the first turn in the 1973 GI Preakness S., stood out so emphatically as a display of raw-torque dominance that inhaling the field with an outside rush on the clubhouse bend became known as the “Secretariat move.” This tactic is not often attempted, primarily because of how difficult the move is to execute successfully to win a race.

And then there was the “Arazi move” unleashed in the 1991 GI Breeders' Cup Juvenile.

Right up until he died peacefully last week in Australia at age 32, the compact chestnut with the jagged white blaze and offset right knee managed to carry outsized cachet here in the States on the basis of our collective respect for one of the most jaw-dropping, sluice-through-the-pack winning runs ever uncorked in a race for 2-year-olds.

That widespread appreciation wasn't always so. Initially, when the dual-continent juvenile champ fell underwhelmingly short of international Classics expectations at age three, Arazi was roundly criticized as an overhyped flop.

Yet when Arazi retired late in 1992 after finishing well-beaten in his career finale, Joseph Durso of the New York Times hinted at a lasting legacy by writing, “So, they won't have Arazi to kick around anymore as a media superstar. But the mystique and the mystery will linger.”

Phenoms who don't follow through generally don't get remembered kindly–if they get remembered at all–in our sport. Arazi couldn't live up to his premature stamp as the defining Thoroughbred of his era. But he retained iconic status in America almost entirely on the basis of that one sublime, sustained run at Churchill Downs Nov. 2, 1991.

When the France-based colt (who had never before raced on dirt or over a counter-clockwise layout) blasted into contention at the head of the lane in the Juvenile after dropping far back from the undesirable 14 post, even Breeders' Cup announcer Tom Durkin seemed taken aback by the “menacing rush” that left America's top 2-year-olds “stunned…with the move here of Arazi, and he's pouring it on! Just an incredible move as they come to the top of the stretch!”

As Arazi kicked clear, widening by five lengths under wraps, Durkin speculated that the son of Blushing Groom (Fr) out of a Northern Dancer mare could have easily won by 10, exuberantly punctuating the performance by exclaiming, “Here, indeed, is a superstar!”

It's impossible to recall Arazi's aura without placing into proper context the outlandish hype he generated in that pre-internet era. He became the immediate winter-book favorite for the 1992 GI Kentucky Derby (back when you had to actually go to a Las Vegas casino to get down a futures wager on America's most important horse race). His odds were as low as 8-5 even though it was well-reported that Arazi had undergone arthroscopic surgery in Kentucky to remove bone spurs on both knees four days after the Breeders' Cup.

Prepping his star in private on the wooded trails of Les Aigles, Boutin legged up Arazi by training him five miles a day at differing gaits and speeds. In the weeks prior to Arazi's one and only pre-Derby prep race, Boutin unintentionally created a media frenzy by criticizing the decision by co-owners Allen Paulson and Sheikh Mohammed bin Rashid al Maktoum to have Arazi undergo the knee surgeries.

“Personally, I don't think that his knees are any better now than they were before,” Boutin allegedly said (later claiming he was mis-translated). “If anything, they are more of a problem than they were….  At the time of the operation, I didn't think it was necessary…. He does not need to do better to win the Kentucky Derby.”

Then in mid-March, a different controversy broke in the press: Arazi's connections were apparently already looking past a presumed win on the first Saturday in May, and were at odds over whether Arazi would pass up the final two U.S. Triple Crown races to try to become the first winner of both the Kentucky Derby and the Epsom Derby. “This is where we may have a problem,” Boutin said at a press luncheon. “If it was left to me as trainer, if I was to arbitrate, my preference would be for the Epsom Derby.”

On Apr. 7, 1992, Arazi easily won the listed Prix Omnium at Saint-Cloud. With 25 days to the Kentucky Derby, the fervor intensified, with Arazi drawing rave comparisons to Secretariat. Bear in mind that even though Secretariat was followed in the late 1970s by a string of elite Triple Crown aspirants like Seattle Slew, Affirmed, Alydar, and Spectacular Bid, none of them had been seriously or widely compared to him. Arazi was different, though.

“[Arazi] is such an extraordinary animal that he makes other great horses look like hacks,” Hirsch wrote. On the eve of the Derby, sports media columnist Richard Sandomir of the New York Times previewed ABC's Derby broadcast as a “90-minute Arazi Show” that would use 24 cameras and 164 microphones “to show Arazi's expected coronation.”

Arazi, though, was essentially a no-show for his own Derby party.

Trying to mimic his move in the Breeders' Cup, jockey Patrick Valenzuela parked the 9-10 favorite at the back of the pack. The colt began to unwind approaching the far turn, with announcer Dave Johnson intoning that “Arazi is flying…gaining ground with every stride!” He ranged up to challenge the leaders off the far turn, then suddenly had nothing left to give. Arazi backpedaled to eighth through the stretch, weakening behind 16-1 upsetter Lil E. Tee.

Deflated, Arazi flew back to France. He lost at Ascot in June and at Longchamp in September prior to winning the Oct. 4 G2 Prix du Rond-Point at Longchamp. He was aimed for another stateside run in the Breeders' Cup, with his European-based rider, Steve Cauthen, angling for the mount in the GI Mile on the grass at Gulfstream Park.

Valenzuela, who had absorbed more than his fair share of flak for Arazi's Derby defeat, ended up retaining the ride in the Mile, with Paulson promising him the gift of a Rolls-Royce if he won with all four of Paulson's Breeders' Cup entrants (P-Val won with two and presumably did not get half a Rolls). He tried to put Arazi closer to the early action, but the phenom faded to 11th as the 3-2 favorite. “No excuse, no rally” was the chart caller's comment. Three weeks later, Arazi was retired to stud in Newmarket with nine wins from 14 starts and earnings of $1.2 million.

While Arazi spent the next several decades traveling the globe in a workmanlike stallion career that took him from England to Three Chimneys Farm in Kentucky and later Japan, Switzerland and Australia, his human connections spiraled off in different directions.

Boutin was diagnosed with liver cancer around the time Arazi retired. He died in 1995 and always maintained that Arazi was the best horse he had ever seen.

Paulson, incredibly, got a rare second chance at a “horse of a lifetime” two years after Arazi's last start when Cigar captivated America with his 16-race winning streak. Paulson died in 2000.

Sheikh Mohammed is still chasing that elusive first Derby win. His Godolphin racing operation is now 0-for-12 in the Run for the Roses. In 2021, 29 years after Arazi's odds-on loss, another Godolphin color-bearer, 'TDN Rising Star' Essential Quality (Tapit), also went down in defeat as the Derby favorite.

Valenzuela, considered one of the continent's premier riders at age 30 when he piloted Arazi, never sustained long-term success in the saddle because of a decades-long litany of substance-abuse problems. But P-Val has repeatedly said Arazi was the best horse he ever rode.

Arazi himself never was able to leap that grand chasm of hype between his stellar juvenile season and a puzzling, physically compromised sophomore campaign.

But the “Arazi move” has stood the test of time for nearly 30 years.

In fact, Independence Day weekend came to a close Sunday night with a 6-year-old gelding named–believe it or not–Arazi Like Move (Graydar) entered in the seventh race at Mountaineer Park in West Virginia.

The ambitiously named 7-for-38 sprinter has a seemingly impossible moniker to live up to (the 9:30 p.m. post time for that allowance/optional claimer was scheduled too late for the results to be included in this column).

But you can bet Arazi Like Move always has fans rooting for that spark of sensation that was once so boldly embodied by his namesake.