The Week in Review: 31 Shades (and Counting) of Derby Gray 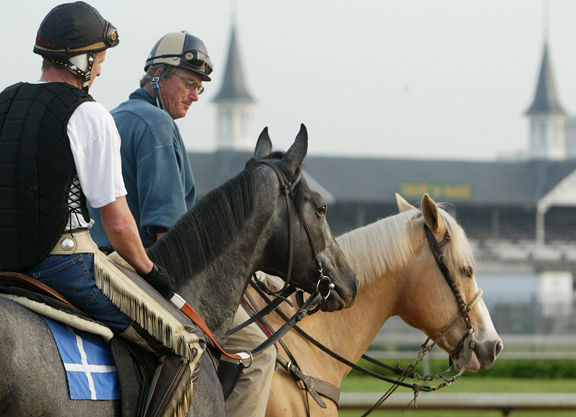 Gray horses have been in a GI Kentucky Derby rut the past 15 years. No fewer than 31 consecutive grays (or roans) have gone to post without winning on the first Saturday in May (or September) since Giacomo roared home in front at 50-1 in 2005.

That's the longest Derby drought for grays in terms of consecutive starts since 1930, when Churchill Downs began compiling detailed records related to horse colors. There's an asterisk as to whether it's the longest stretch in terms of years. There was a 17-year gap between Decidedly (1962) and Spectacular Bid (1979), but during that span, fellow gray Dancer's Image (1968) crossed the finish wire first, then was subsequently disqualified for a controversial Butazolidin  positive.

Gray horses have a special place in racing lore, with both negative and positive connotations largely rooted in superstition. You've probably heard the phrase, “They say a gray won't earn its hay” around the backstretch. Yet you know full well that Derby-winning Hall of Famer Silver Charm (1997) did okay in the earnings department, bankrolling $6.9 million in purses.

“Never bet an unknown gray” (a horse picked out of the program without first seeing its coat color) is another alleged trackside taboo. “Gray horses for gray days,” suggests that horses of the fairer color have some unexplained edge in the mud (someone with access to a more extensive database than me, please run a long-term query).

Some natural selection theorists have proposed that grays evolved as faster horses in the wild because their distinctly lighter color made them more visible to predators. Purportedly, this enabled surviving grays to pass along some form of superior speed to their offspring.

The modern era of fascination with gray Thoroughbreds traces to the advent of television. Can you imagine the heady rush of witnessing “The Gray Ghost” streak around the track as a luminescent blur on your cutting-edge, black-and-white, rabbit-ears set back in the early 1950s?

That would be Native Dancer, who racked up a jaw-dropping 21-for-22 lifetime record. But his one race that gets talked about the most is when the sport's first TV hero suffered his only career loss–in the 1953 Derby.

Other high-profile grays who tasted Derby defeat include Holy Bull (1994) and Skip Away (1996), both of whom still managed to win 3-year-old championship honors. Tapit lost the 2004 edition prior to rising to prolific status as a stallion.

This column has mentioned four of the eight gray or roan Derby winners since 1930 (those two separate color distinctions got merged into one descriptor by The Jockey Club in 1993). Care to pause before reading the next paragraph to name the remaining four?

Two stories in the news last week involved racetrack safety on the mid-Atlantic circuit. On Apr. 20, the chairman of the West Virginia Racing Commission (WVRC) went on the record as wanting Charles Town Races to consider installing a synthetic surface (read it here). Two days later, the idea of going to synth at Laurel Park was batted around at the Maryland Racing Commission meeting after it was revealed that a dirt-track repair project there was likely to take about 40 days to complete (story here).

During the WVRC meeting, chairman Ken Lowe, Jr. asked Mick Peterson–the director of the Racetrack Safety Program, who is familiar with the work at both tracks–to tell the board at which track in North America he'd choose to train and race a Thoroughbred if he owned one.

Peterson answered that provocative question by citing positive safety profiles for three tracks on the continent.

“For the last three years, the safest racetrack in North America has been Del Mar,” Peterson said, noting that the record stands out considering “how many strikes they have against them.”

Peterson explained that Del Mar's dirt track annually gets used by “way too many horses.” Plus, he added, the seasonal meet is traditionally preceded by a county fair that allows the dirt to be compacted by heavy equipment that would ideally never cross most racetrack surfaces.

“But what they've got going for them is it never rains and the weather varies about five degrees the whole year,” Peterson said. “That's huge.”

Peterson said the recently installed Tapeta surface at Turfway Park also rates highly, and he gave a positive assessment of its predecessor, Polytrack.

“They were giving Woodbine [Tapeta since 2016] a run for the money on being the safest racetrack in North America,” Peterson said. “And that's with [Turfway] running some lower-level horses during the winter…. Running during the winter, that synthetic track has been incredibly successful there.”

Lowe seemed to be nudging Peterson to share his advocacy for switching to synthetic at Charles Town. But Peterson stopped short of doing so, underscoring that synthetic racing surfaces are not his specific area of expertise.

“There are definitely some biomechanical issues that a number of the horsemen have identified, the hind-end and soft-tissue injuries on synthetic,” Peterson said. “I don't think they're perfect right now. I think there's ways that we can improve them and improve the maintenance of them. But you just look at Turfway on their synthetics, I mean that's just incredible the record they've had over the last 10 years.”

Retreats from Racing in Illinois

During the same Apr. 22 earnings conference call in which Churchill Downs Inc. (CDI) tried to spin it as a positive that it was abandoning its plans to build a $300-million hotel and historical horse race (HHR) gaming facility on the first turn of its flagship racetrack, the CEO of the corporation that put an end to racing at both Hollywood Park and Calder Race Course termed it “all good” as the process continues to sell Arlington International Racecourse for non-racing purposes (full story here).

“With respect to the Arlington Park land sale, a preliminary bid date has been set, and as those bids come in in the second quarter, we'll evaluate them and figure out next steps,” said CDI's CEO Bill Carstanjen. “The ultimate conclusion of that process is something I can't responsibly predict for you because we'll have to see the nature of the bids…. This is what it takes to run a complex process to sell a big piece of land with a lot of value like that one.”

As for whether CDI would seek to transfer its Arlington license to another part of Illinois, Carstanjen said the corporation would take a wait-and-see approach to determine, “whether there's opportunities to move the racetrack elsewhere in the state as well.”

Arlington's opening day is Friday. Another Illinois track opens for the season Tuesday, but you might not recognize the name when you see it on the simulcast calendar.

“FanDuel Sportsbook and Horse Racing” is the track formerly known as Fairmount Park.

Obviously, Fairmount's recent decision to toss 95 years of naming history into the nearby Mississippi River isn't as harmful as CDI's decision to entirely wipe away a cherished 94-year-old racetrack itself. But both decisions speak to the disquieting nature of horse racing's supposed “partnerships” with corporate gaming entities.