The Transformation of Bob Baffert 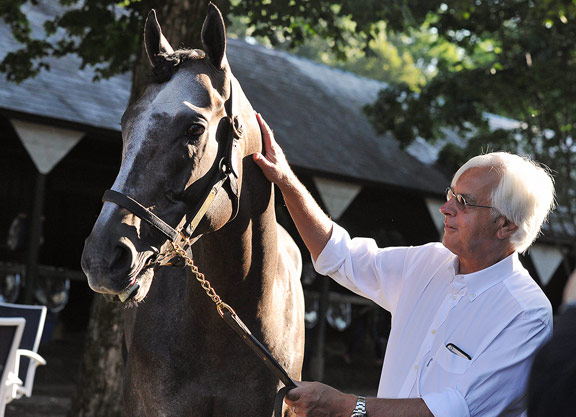 Baffert with champion Arrogate in 2016 | Horsephotos

“The man is often accused of being inordinately cocky, even irreverent and vain to a fault.” –Bill Nack, GQ Magazine, 2003

The man in question is Bob Baffert, and Nack wrote that after Baffert won the 2002 GI Kentucky Derby with War Emblem (Our Emblem). It wasn't atypical of what many people thought of Baffert at the time–great horse trainer, could be kind of a jerk.

After wins in the GI Preakness, he would wear the trophy on his head, like he was a sixth-grade class clown. In 1998, he got into a feud with the late Sonny Hine and called him Elmer Fudd. He once got into a shoving match with Chris McCarron. He so upset trainer Jenine Sahadi at the draw for the 2000 GI Santa Anita Derby that she stormed off the podium in tears.

“Thank God my horse has a lot of class, because there are a lot of people here who don't,” she said of Baffert.

Fifteen years after Nack's harsh appraisal, the trainer's image has taken a 180-degree turn. People may still be jealous of his success, but he has become the face of racing and most are glad that he is. He's gone from inordinately cocky to humble. Irreverence has been replaced by a respect for the sport and a genuine appreciation of his phenomenal accomplishments. Vain? Not the 2018 version of Bob Baffert. Far from it.

Respectful, grateful, charitable, humble and never too busy to grant someone an interview, that's the Bob Baffert the public saw during the run to the Triple Crown by Justify (Scat Daddy).

Baffert can't pinpoint any one thing. For one, at 65, you don't act like you did at 35. He also lost both his parents within the last few years and suffered a heart attack in 2012, one he thought was going to cost him his life.

Baffert thought the irreverent sense of humor he brought with him to the Thoroughbred sport when he switched over from Quarter Horses would be seen as a breath of fresh air. Rather, he realized, the act grew tired.

Baffert grew up in a large close-knit family in Nogales, Arizona and said the family way was to joke and poke fun at one another, and do so constantly.

“We'd always be breaking each other's chops,” he said.

“They're a big family, a very close family,” Baffert's wife Jill said. “They don't cut anybody any slack among the siblings. They always call each other out, jokingly. If you don't know them, you think, 'Wow, this is really inappropriate.' It's kind of the way he was used to communicating with people. Anybody who really knows Bob will tell you he has a very kind heart, a soft side. When I met him, that just didn't translate well.”

Baffert began to switch over full-time to Thoroughbreds in the late eighties and he was well on his way to being a star. He won his first Breeders' Cup race in 1992 with sprinter Thirty Slews (Slewpy) and lost the Kentucky Derby by a nose in 1996 with Cavonnier (Batonnier). After coming over from Quarter Horse racing, which gets virtually no media exposure, he was thrust into the limelight, and admits he wasn't ready for it. He wanted to impress people and thought the best way to do so was to play the mischievous, cocky, prankster role he was so comfortable with.

“I tried to be funny all the time and I realize now it wore on people,” he said. “I always thought I was a humble person. I've never been braggadocious. But I always felt I had to play to the cameras.”

But he coveted the spotlight because he saw it as a way to raise his profile, to achieve his goal of being the next Wayne Lukas, another training great who started out in Quarter Horse Racing. Because he was always ready with a wisecrack, the media couldn't get enough of him.

“I think I was just clawing myself up the ladder to become 'the guy,'” he said. “When I became 'the guy,' I had to start acting like it, not some immature person always acting like he thinks he's funny.”

On the backside, he developed a reputation of being lazy. In a tradition-bound sport where some trainers judge their worth as a horseman by how early they get to the barn, his rivals were appalled that he would roll into the Santa Anita backstretch a good two hours after most had gotten to work. To this day, he is still a late arriver.

“I get here every morning at 6:15,” he said. “But if you don't get here at 4:30, you're a late riser. When you're doing well, people want to knock you and that's what they picked up on, that I got to work late. Stuff goes on at our barn between 5 and 6 and I have a great crew and they go over every horse and give me a report on them when I arrive. The action starts at 6:30 when we start taking horses to the track and I'm always here for that. I'm here every day and I never leave before noon. Guys started spreading rumors that I get to the barn at 9. That's ridiculous.”

There was not one single thing that changed Baffert, and change didn't happen overnight. But two events certainly caused him to look at life differently.

In 2012, while in Dubai, he had a heart attack. Shortly before that, his mother died. Shortly after the heart attack, his father passed away.

“The heart attack made me feel like I was getting a redo in life,” he said. “I thought I was toast. I thought I was curtains. I remember telling Jill, 'Sell all the horses, except for one, Contested (Ghostzapper).' I came out of it, but I was scared. Is this way I'm going to end my life, in Dubai? Something came over me. I thought, 'I'm just going to enjoy things from now on.'”

“He had two life-changing events, losing his parents and having to face his own mortality,” Jill Baffert said. “He'd say to me, 'I'm built for stress. I handle stress.' He really believes that. Instead of confronting issues which are stressful to him, he just compartmentalizes everything instead of dealing with it. In 2012, that manifested itself with the heart attack. Now he has a better understanding, a better way of dealing with stress and with people. He knows he's not immortal, he's not infallible. As time has gone on, he's been able to appreciate his successes more.”

And, that, perhaps is the biggest reason Baffert has changed. He was once so hungry for success that he tried too hard to impress people, to be the center of attention, to throw out the wisecrack that the reporters would eat up and put in their copy in the next day's paper.

Now, he doesn't need that. He doesn't need to steal the spotlight at all times to get good horses. They come to him no matter what. He's one of only two trainers in history to win the Triple Crown twice and his 15 wins in Triple Crown races is the best of all time

“I've mellowed out,” he said. “I was fighting to get to the top and be like Wayne Lukas. He was the top. He was the bar. Once I got there, I didn't know if I liked what came with it. I really don't want the attention.”

Yet, now he can't avoid it. He could easily withdraw, refuse interviews and immerse himself in his work. But he feels an obligation to promote the sport and knows he, more so than anyone else, has the ability to draw attention to the game. He is the closest thing racing has to a real celebrity. On his flight home from Louisville after the Derby, the actor and rapper Ice Cube was on the same plane and he pulled Baffert aside and wanted to know all about his win.

“As he's gotten older, I feel like maybe Bob doesn't feel the need to prove himself,” Jill Baffert said. “That he has a bigger space for gratitude and he realizes how blessed he's been to have had so many good horses.”

Not that Baffert has turned boring or vanilla. He's not wired that way. It's that he has found a balance. He's learned you can be fun without being obnoxious, that you can be good without being arrogant. He understands humility is a virtue. He knows nobody likes “inordinately cocky, even irreverent and vain to a fault.”