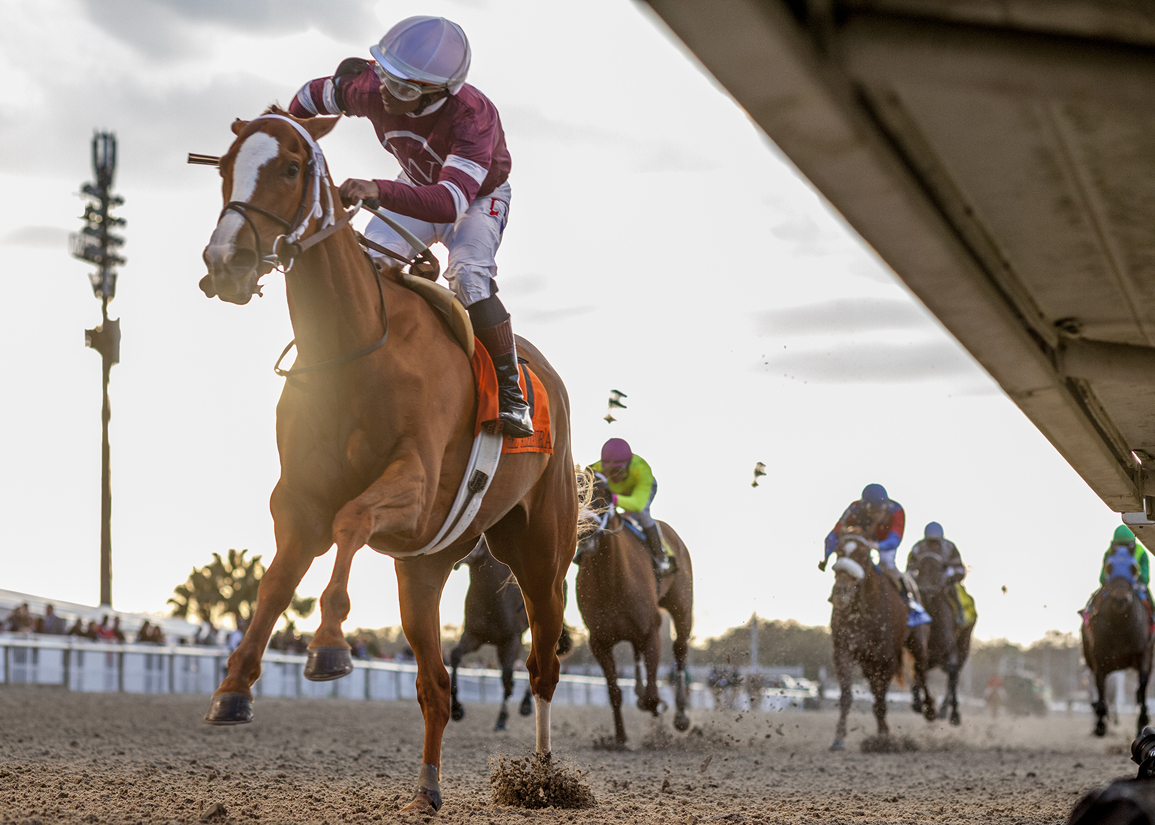 It was an eventful weekend for candidates for the GI Kentucky Oaks. The highly regarded Lake Avenue (Tapit) was a major disappointment, finishing fourth in the Busher Invitational at Aqueduct. She falls out of the Top 10. Donna Veloce (Uncle Mo) rolled to an easy victory in her 3-year-old debut in the GIII Santa Ysabel S. and Bob Baffert unleashed a potential monster in Gamine (Into Mischief). The $1.8-million purchase at the 2019 Fasig-Tipton Midlantic 2-Year-Old Sale romped in her debut Saturday at Santa Anita. The weekend ahead will be a quiet one for the class of 3-year-old fillies as there are no graded stakes for that division.

Looks like Finite still has to win over some doubters as she was sent off at 8-1 in the latest round of the Kentucky Oaks Future Wager. That puts her at third behind the mutuel field and Venetian Harbor. Trainer Steve Asmussen has won the Oaks twice, with Summerly (Summer Squall) and Untapable (Tapit), and both took the Fair Grounds route before winning the Oaks. Finite and Summerly share the same primary owner in Winchell Thoroughbreds. Finite obviously remains sharp for Asmussen as she had a bullet five-furlong workout Monday at the Fair Grounds in 1:00 flat (1/20). Should she win the Oaks she will be the third straight winner of that race to come out of the GII Rachel Alexandra S.

She's no longer the one who couldn't quite get over the hump. After finishing a close second in both the GI Breeders' Cup Juvenile Fillies and the GI Starlet S., the $800,000 purchase at the 2019 Fasig-Tipton Florida Select 2-Year-Old Sale romped in her 3-year-old debut in the GIII Santa Ysabel S. While the Santa Ysabel did not have nearly the quality and depth that the Juvenile Fillies had, Donna Veloce was able to make a statement with a decisive victory. She overcame a stumble at the start on her way to a 4 1/4-length win. “I thought it was a perfect race,” trainer Simon Callaghan said. Jockey Flavien Prat will have a tough decision on his hands as he is the regular rider of both Donna Veloce and Venetian Harbor, who is third in the TDN's Oaks Top 10.

That she was pounded down to 4-1 in the Oaks future wager shows how much confidence people have in this filly, who has been brilliant in her two dirt starts after debuting on the grass for trainer Richie Baltas. According to connections, Venetian Harbor will go next in the GI Ashland S at Keeneland, but they haven't completely ruled out starting next in the GI Ashland S. at Keeneland. She returned to the worktab Friday with a five-furlong breeze in 1:00 2/5 (4/45). Who will Prat choose? Simply put, she's a fast horse.

Her next start will be a big one, as it will show whether she needed the race when runner-up off the layoff in the GII Rachel Alexandra S. or that she's hasn't progressed that much from her 2-year-old season. Trainer Brad Cox seems convinced she will run better in her next start. “There's no doubt that she should be better in her second start off a layoff,” Cox said. “Her last two works have been very positive and that's a good sign for a horse turning three. I was happy with her last race, but I understand she has to move forward. I think she will.”

Trained by Saffie Joseph, Jr., Tonalist's Shape is, literally, a horse that has done nothing wrong. After breaking her maiden at 19-1 in her first career start, she remains unbeaten in her career at five-for-five. Yet not a lot of people have jumped on her bandwagon, as some of her speed figures have been on the slow side and it remains to be seen how strong this group based in South Florida is. She is 9-1 in the latest round of the Kentucky Oaks Future Wager and is from the first crop of Tonalist, who is on a nice run of late. In addition to Tonalist's Shape, offspring Tonal Vision won a maiden race Sunday at Aqueduct and Alta's Reward finished second in the GIII Honeybee S. Saturday at Oaklawn.

Though she hasn't raced since the Feb. 2 Busanda S. at Aqueduct, she managed to move up this past weekend thanks to what happened in the Big A's Busher Invitational. The winner was Water White, who, when last seen, finished second in the Busanda, 7 1/2 lengths behind “Harvey.” Trainer Bill Mott is being particularly patient with this one and plans to give her two months off between races before bringing her back in the Apr. 4 GII Gazelle S. Meanwhile, she is back in Florida with Mott's string at Payson Park. Distance figures to be her strong suit, so much so that she may actually be better at a mile-and-a-quarter.

It seems that not a weekend goes by when Bob Baffert doesn't unveil a new potential superstar, yet most of them have been colts. Last Saturday it was a filly, a $1.8-million purchase named Gamine. Owned by Michael Petersen and purchased as the topper at the 2019 Fasig-Tipton Midlantic 2-Year-Old Sale, she romped by 6 1/4 lengths in her debut. Her time for the 6 1/2 furlongs was 1:16.59. Earlier in the Santa Anita card, a maiden race for males went in 1:17.19. The only obvious knock on her is that she faced just three rivals and was such an overwhelming favorite that she paid $2.20. The question now is whether or not Baffert can get a 6 1/2-furlong maiden winner in March ready for the Kentucky Oaks in less than two months? She'll have to be very special to pull that off, but she may just be.

She's more steady than spectacular and did only win the Busher by a nose. But she beat a decent field that included GII Demoiselle S. winner Lake Avenue and managed to overcome a wide trip. She probably has to improve, but seems to be getting better with each start. “The pace helped us,” trainer Rudy Rodriguez said. “The two top horses didn't run their race and that helped us. She's a grinder and she kept coming and coming.” Bought for just $50,000 at the 2018 Fasig-Tipton Kentucky Select yearling sale, Water White will likely turn up next in the Apr. 4 GII Gazelle S.

Probably didn't beat much when winning her first stakes race, last Saturday's Honeybee at Oaklawn. The good news is that she appears to be thriving now that trainer Brad Cox has decided to run her in route races. Prior to the Honeybee, she was a good a second in an Oaklawn allowance at a mile-and-a-sixteenth in an improved effort. She's in good hands with Cox, who does a lot of things well, but has been particularly strong with young fillies. She's headed for the Apr. 10 GIII Fantasy S. She'll move up on this list if she wins again, particularly if she faces tougher competition next time.

It's been a good year for seven-figure purchases. Like Gamine, Spice Is Nice cost in excess of $1 million. She sold for $1.05 million at Keeneland September. After a dazzling maiden win, she was second best behind Tonalist's Shape in the Davona Dale and will likely meet that same rival in the Gulfstream Park Oaks. Considering the Davona Dale was just her second career start, she has a license to improve. She will need to not just to beat Tonalist's Shape, but to show she has what it takes to win the Oaks.