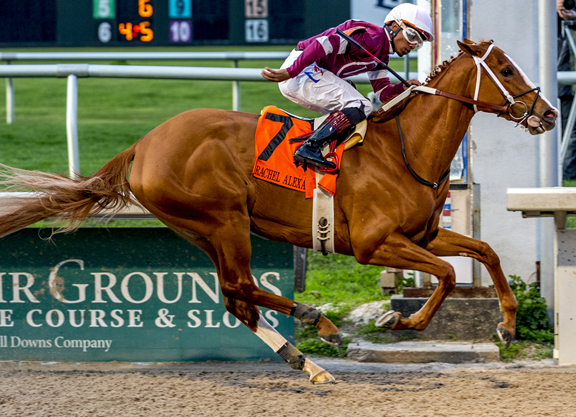 While the GI Kentucky Oaks will always be overshadowed by the GI Kentucky Derby, this year’s Oaks has nothing to apologize for. Through the early round of prep races, it appears that the 2020 Oaks will include one of the deepest and most talented lineups in the race’s history. That’s still the case after the tragic loss of Taraz (Into Mischief), who had to be euthanized after suffering an injury in a workout Monday at Oaklawn Park. The early round of preps have produced some outstanding performances and several top 3-year-old fillies will be heard from soon. After a quiet weekend coming up, Gulfstream’s Feb. 29 GII Davona Dale S. should determine leadership among South Florida based fillies.

Finite has won five in a row overall, four straight stakes and handily beat the 2019 Juvenile Filly champion in the GII Rachel Alexandra S. Though it was Eclipse Award winner British Idiom’s first race since the GI Breeders’ Cup Juvenile Fillies, Finite looked like the better horse at Fair Grounds, winning by a decisive 4 3/4 lengths. While the New Orleans route to the Derby has largely ended in disappointment, the route to the Oaks has been among the most productive in racing. Over the last 15 years, eight Oaks winners have come out of New Orleans. With all his filly has going for her, trainer Steve Asmussen believes it’s important that she continue to improve.

“This time of year with the 3-year-olds you need to be better the next time,” he said. “I think she was better (in the Rachel Alexandra) than she was in the Silverbulletday and we will need to continue to improve to end up where we want, which is her winning the Kentucky Oaks.”

She could have a rematch with British Idiom in the Mar. 21 GII Fair Grounds Oaks, where a victory could cement her status as the Kentucky Oaks favorite. Finite is nominated to the Triple Crown, but her connections have said so far that the Oaks is the definite goal.

Quite a coup for the Coolmore stallion Munnings as his offspring have landed in the top two spots in the first-ever TDN Kentucky Oaks Top 10.

Venetian Harbor began her career with a second-place finish on the grass in a maiden special weight race in November at Del Mar. It wasn’t until trainer Richard Baltas tried the dirt with her that she showed her potential. She crushed her opponents, winning a 6 1/2-furlong maiden at Santa Anita by 10 3/4 lengths. A stiffer test came in the GII Las Virgenes S., and she handled it easily with an electrifying 9 1/4-length win.

For her, there are still some questions that have to be answered. There are several other top Oaks threats in California and most of the top fillies stayed away from the Las Virgenes. That’s one of the reasons Venetian Harbor was sent off at 3-10 in the race. How will Venetian Harbor fare when she faces tougher company? And, so far, Venetian Harbor has relied on her early speed to just run away from her opponents. Depending on who else shows up and how much speed there is in the race, that sort of style may not be a good fit for the mile-and-an-eighth Oaks.

Her connections are looking for an improved effort next time out after the 2019 champion 2-year-old filly finished second in her 2020 debut behind Finite in the Rachel Alexandra. It was her first start since the GI Breeders’ Cup Juvenile Fillies and she was wide on both turns, but she was clearly second best. Nonetheless, her connections were pleased with the effort.

“It was a fantastic effort on her behalf,” trainer Brad Cox said. “[Finite] has had three races since we ran in our last race. I’m very pleased with our filly, I really, really am. She was wide on both turns, ran on down the lane and got a little tired late. I thought that was something that would come into play.”

She will need to improve to beat Finite or some of the other top fillies in this division. There is no reason why she can’t. But if not, she wouldn’t be the first filly who flattened out after her juvenile campaign while others caught up to and passed her.

British Idiom could emerge as a sentimental favorite after the congenial Cox tragically lost his other top 3-year-old filly, Taraz.

What would a “road to” list be without a Bob Baffert-trained horse?

While Baffert may not be as loaded with 3-year-old filly talent as he is with the colts, he has a legitimate Oaks contender in Bast. She leads all members of her division in terms of Grade I wins with three, and kicked off her 3 year-old campaign with a win in the GII Santa Ynez S. A $500,000 purchase at the Fasig-Tipton Saratoga sale, the only thing standing between her and a higher rating is her third-place finish in the Breeders’ Cup Juvenile Fillies.

Baffert has not divulged where he plans to run her next and she’s only had one workout since the Santa Ynez. If she doesn’t show up on the worktab within the next few weeks, we may have to drop her from this list.

She wasn’t good enough to beat British Idiom in the Juvenile Fillies or Bast in the GI Starlet S., but she came close both times, losing the Breeders’ Cup by a neck and the Starlet by a half-length. She need only improve a little bit in order to find her way to the winner’s circle against the best of her division.

An $800,000 purchase at Fasig-Tipton’s Florida Select 2-Year-Olds in Training Sale, she had had only one start, at 6 1/2 furlongs, before trainer Simon Callaghan tried her in the Breeders’ Cup. Considering her inexperience and that she had only sprinted, it was an impressive showing and indicated that she should improve as she gains experience.

Trainer Simon Callaghan is taking his time with this filly as she won’t make her 3-year-old debut until March and, through Feb. 14, had only two published workouts. The most recent was a four furlong work in :49 2/5 at Los Alamitos.

Like Bast, she is by Uncle Mo, also a Coolmore sire.

For now, she will have to take a backseat to stablemate Finite, but that could change. The win in the Frizette was not a fluke and she is in the very capable hands of trainer Steve Asmussen. She also was among the more impressive maiden winners last year at Saratoga, where she won at first asking by 6 1/4 lengths to earn a ‘TDN Rising Star’ nod.

Trainer Bill Mott isn’t known for having top 2-year-olds, but he had one last year in Lake Avenue, a Godolphin homebred. She broke her maiden on Nov. 14 in her second career start, winning by 12 1/4 lengths and followed that with an impressive win in the GII Demoiselle S. at Aqueduct. Knowing how Mott takes his time bringing his horses along, this one probably hasn’t shown her best yet.

“We’ve tried not to overdo it with her,” Mott said. “She’s done what she has done with a normal training schedule and she brought us to those races. We didn’t push her into them.”

Lake Avenue has been a regular on the worktab at Mott’s winter base, Payson Park.

Lake Avenue may not be the best horse in the field if she makes it to the Kentucky Oaks, but she could be the best-bred. Her dam is Seventh Street (Street Cry {Ire}), the winner of the 2009 GI Apple Blossom H. and the 2009 GI Go for Wand H. In addition to Lake Avenue, she produced 2015 GI Malibu S. winner Marking (Bernardini).

The unknown commodity among those eyeing the Kentucky Oaks, she is arguably the most impressive 3-year-old filly maiden winner so far at the Gulfstream meet. A $1.05-million purchase at the 2018 Keeneland September Sale, she lived up to her price tag when cruising to a 12-length win in her debut Jan. 12.

With his horse not debuting until January and having had only one start, trainer Todd Pletcher is playing catch-up, but he doesn’t see any reason why his filly won’t be able to handle stakes company.

“Right now, we’re keeping all of our options open, including the Davona Dale,” he said. “We’re not trying to rush into anything, but she was very impressive in her debut. It was a quality race, the type of race where you wouldn’t rule out jumping right into a stakes race.”

The talent is there. But will her inexperience cost her?

With three starts, a maiden win and a stakes win, on paper, she looks a lot like stablemate Lake Avenue. Both have also won at nine furlongs.

Harvey’s Lil Goil made her way into the Kentucky Oaks Top 10 with a runaway win in the Feb. 2 Busanda S. at Aqueduct. Because the Busanda is an ungraded stakes run in the middle of the winter in New York, it’s fair to question the quality of the competition she beat, but she certainly did it the right way, winning by 7 1/2 lengths after hesitating at the start.

She’s still got a lot to prove and needs points to guarantee a spot in the Oaks, but Mott is not going to push her.

“She won the Busanda off a seven-week layoff and with little training,” he said. “I think she will be ready to run in the Gazelle. I’m thinking that if I put two more races into her before the Oaks it would be more than necessary. I want to save enough horse because she might be an Alabama-type filly because it looks like distance is not an issue for her. I want to save something for a little later in the year.”

Tonalist’s Shape is undefeated in four career starts and hails from one of the hottest barns in racing, that of Saffie Joseph, Jr. After winning the one-mile Hut Hut S., Joseph shortened her up for a start in the seven-furlong GIII Forward Gal S. It was another easy win, but a lot of people jumped off her bandwagon after she was given a Beyer figure of just 70 for the race.

She’s obviously faster than that, but she will have to prove it when facing tougher in the Davona Dale at one mile. With a win, she’ll still have to answer the question of two turns having gone through five lifetime starts with all her races around one turn. Joseph has said his filly is not just a sprinter. We shall see.