Home » Archive » Shared News » The TAA: Accredit to the Industry

The TAA: Accredit to the Industry 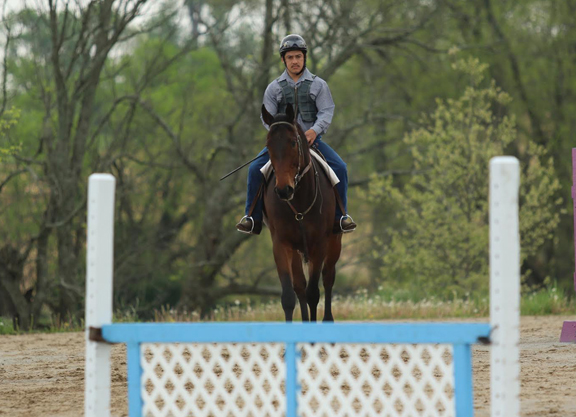 On a warm spring morning in April, Closing Ahead, a 4-year-old colt by Closing Argument, strides out of his stall. Big by any standard, Closing Ahead is new to this small farm on the outskirts of Louisville. It is, in fact, his first day under tack since arriving, and the colt, feeling good but sensible, is steered cautiously up a small hill behind the barn, down a grass path, and to a show ring with a number of jumps. Eddie Orantes, an exercise rider at Churchill Downs who drives over a few times a week to ride, is aboard. Orantes is patient and calm, a reassuring presence to the recent arrival. After all, test drives can be nerve-wracking, and this test drive will help determine Closing Ahead's future course.

Welcome to Second Stride, a 501 (c) (3) not for profit that rehabs, retrains and helps place retired Thoroughbred racehorses. It's one of dozens of organizations that have sprung up in past 15 years that have helped the racing industry with the crucial issue of finding second careers for horses when their racing days are done.

It's been a busy morning at Second Stride, and it's not just due to a curious menagerie that, on this day, includes a garrison of chickens patrolling a muck wagon for morsels.

Today, Second Stride is being inspected by the Thoroughbred Aftercare Alliance, or TAA. Conceived just five years ago, the TAA was the brainchild of industry leaders and set into motion by Starlight Racing's Jack Wolf. The goal was to create a broad-based industry initiative, an organization that would pull together different power centers. If the TAA is ever in danger of being lost among the industry's alphabet agencies, it's showing on this visit what sets it apart. The TAA, through its Code of Standards (click here), is North America's lone accrediting organization of Thoroughbred retirement and retraining facilities.

That fact might be lost on some who view the TAA only as a fund-raising organization for aftercare-which it is…in part. But it's this accrediting arm that is at the heart and soul of the TAA, and is important in a day and age when people, rightly, are hyper-aware of where their donated dollars are going.

“The TAA ensures the industry that the money they invest in aftercare is being invested well,” says the TAA's Operations Consultant Stacie Clark. “Having inspections, and surprise inspections, validates that an organization does what it says it's going to do; that horses are being looked after, and industry money that supports these organizations is at its best use.”

For an organization to be eligible for TAA grants, it must first be accredited. Many of these organizations, like the Thoroughbred Retirement Foundation and New Vocations, already have effective fundraising arms, but can also make good use of TAA funds. Each individual farm involved with these organizations, then, needs to get the TAA stamp of approval.

That's no mean feat. Back at the TAA's Lexington-based office, located in The Jockey Club building, Janice Towles acts as Accreditation and Grants Manager. Towles oversees a no-stone-unturned application process that might best be described as grueling. To be considered, a farm must meet five requirements. Among them, the farm must be a 501(c)(3), must have been in operation for at least three years, and must have a written euthanasia policy “consistent with the American Association of Equine Practitioners (AAEP).”

From there, the application requires extensive information in five areas: operations; education; health care management; facility standards and services; and adoption policies and protocols. In total, it's a good binder's worth of forms. If Towles and her team give an applicant a thumbs-up, the application moves to the Accreditation Committee. An up vote there means that then, and only then, is a verifying inspection scheduled.

TAA accreditation requires inspection at least every two years, and surprise inspections are conducted to ensure the integrity of the program. In its first full year, in 2013, the TAA accredited 23 organizations. Last year, that number had grown to 64 organizations.

“Every organization is different,” says Clark. “Maybe 80% are retraining and rehoming facilities, and the rest may be considered sanctuaries. In either case, we want to make sure these organizations are setting the gold standard for aftercare.”

On hand at Second Stride are several of the TAA's key players. Inspection Coordinator Suzie Picou-Oldham is here, as is Accreditation Committee Chair Kristin Werner Leshney. Leshney, who also serves as a legal associate at The Jockey Club, is conducting this inspection, and stands with a pen and notepad and chats with Second Stride founder Kim Smith.

Smith says that upwards of 60% of the horses at Second Stride need some form of rehabilitation from injury, but the farm has had to humanely euthanize just “three or four in our history.”

Leshney and Smith get into the nitty gritty of the inspection. What are the feed and vaccination protocols? How does the farm and its vet handle particular injuries?

A walking tour commences, and Leshney notes the number of horses in each paddock, the fencing, the grass cover. Smith explains that she works closely with dozens of trainers, including Dale Romans, Buff Bradley, Al Stall, Jr. and Tom Amoss. This is no rubber-stamp process, but it seems clear to an outsider that Second Stride has its proverbial ducks in a row.

Second Stride stands in good company should it retain its accreditation. Other operations that are accredited by the TAA include CANTER, The Exceller Fund, The Maker's Mark Secretariat Center, New Vocations, Old Friends, Our Mims Retirement Haven, ReRun, and the TRF.

So, how much does it mean to organizations that receive accreditation? Plenty, it turns out. First, they can point to this accreditation as evidence of excellent stewardship. That's no small thing when it comes to raising money for aftercare.

Second, they become eligible for annual TAA grants, which grew from $1 million in 2013 to over $2.4 million in 2016. (Initially funded by seed money from the Breeders' Cup, The Jockey Club, and Keeneland, the TAA has now expanded its donation base to include all four of the major U.S. sale companies and one in Canada, as well as horsemen's groups, racetracks, trainers and stallion farms.)

Third, the accreditation program itself becomes a clearinghouse for best practices. What one organization does exceptionally well might make its way into the TAA's best practices, or simply might be passed along by word of mouth.

For Second Stride's Kim Smith, that's a huge opportunity to get better.

“TAA really does do amazing work in mentoring and helping programs like ours,” says Smith. “They give us access to a professional level of help for developing a solid infrastructure. Not only are we given helpful care protocols for our horses, but all the contracts, financials, procedures and office work best-practices protocols are touched on as well. Though we are very proud of our program and facilities, we still get lumps in our throat hoping we make the muster and make the TAA proud!”

Michael Blowen, founder of Old Friends, agrees. “I think the TAA is the best thing to happen to aftercare,” he says. “There are two reasons. The most important reason is that the accreditation process is diligent-and I'm being kind. It's tougher than an audit by the IRS [laughs]. But that makes you think through all the things you're doing, and that they're up to snuff, whether it's budgeting or raising income for the farm. The second thing is that they raise money that goes right to the horses. It goes to feed, goes to the farrier, goes to the vet clinic. One of the provisos when you get a grant from them is that you can't use the money to do something like improve your farm. It has to go directly to the horses. I just can't say enough about them.”

Back at Second Stride, Eddie Orantes and Closing Ahead are slowly touring the show ring. They walk around and in between the jumps. Closing Ahead looks curiously at each obstacle, and Orantes gauges his response. After a few minutes, they turn and head back to the barn. This test drive has been a good one, and with a little luck, Closing Ahead will have a second career in no time.