Home » Archive » Shared News » The Sportsman of the Year? It's a Horse, of Course

The Sportsman of the Year? It's a Horse, of Course 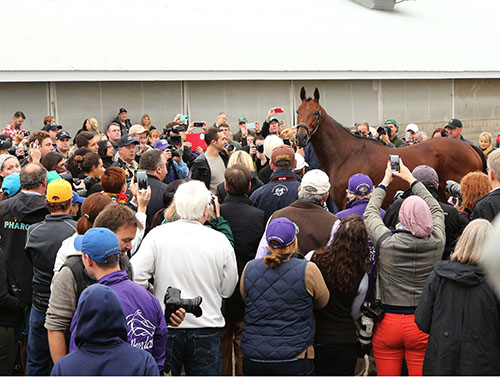 Pharoah and his fans | Coady photography

This time, American Pharoah's competitors are not named Tonalist, Keen Ice, Effinex, Frosted or Firing Line but Curry, Rousey, Djokovic, Serena, Speith, Messi. They, along with American Pharoah, are among the 12 nominees for the coveted title of Sports Illustrated's Sportsman of the Year. If there's any justice, if the panelists who decide who will win the award haven't spent the last year living under a rock, American Pharoah will beat these competitors as easily as he readily handled his four-legged foes on the racetrack.

As is always the case, there are many worthy contenders for the title as any year in sport features incredible feats and performances. But when it comes to American Pharoah, he is the only one for whom you can check all the boxes and do so without hesitation.

The award is for “the athlete or team whose performance that year most embodies the spirit of sportsmanship and achievement.”

The achievement part is obvious.

American Pharoah did something in his sport that had not been done in 37 years, winning the Triple Crown. But that one concise sentence doesn't accurately sum up the accomplishment. There was every reason to believe that no horse would ever again win the Triple Crown, that because of the changing times and the way modern racehorses are trained and bred for speed over stamina the feat had become virtually impossible. Between American Pharoah and the previous Triple Crown winner Affirmed (1978), 13 horses had won both the Kentucky Derby and Preakness but did not win the Belmont. On paper, some appeared to be invincible, but the difficulty of the task tripped them all up, at least until American Pharoah came along.

American Pharoah's sweep of the Triple Crown would be like a pitcher winning 30 games. That, too, is something from a bygone era that is never supposed to happen again.

His on-track story didn't end with the Belmont. He continued to race and bring energy to a sport that is always in need of a lift. Before a record crowd, he won the Haskell at the Jersey Shore. Though he lost the Travers, he didn't duck the race when less sporting owners and trainers would have done so. He went out with a bang, romping in the Breeders' Cup Classic to become the only horse in history to win that race and the three Triple Crown events.

There's no easy way to compare horse racing to other sports but no one came close to having a bigger impact on their game than American Pharoah did in his.

The sportsmanship aspect of the award doesn't seem to weigh as heavily with voters as it once did. Recent winners might all be fine people, but the past three winners–Madison Bumgarner, Peyton Manning, LeBron James–were all obviously recognized for what they did on the field, court or diamond and not off of it.

But a sportsman is more than just a great athlete, and this shouldn't be an award just for who scored the most touchdowns, hit the most home runs or even who won the most important horse races. Sportsmanship is about conduct and character and here's another category where American Pharoah laps the field.

Owner Ahmed Zayat, trainer Bob Baffert and jockey Victor Espinoza all made notable contributions to charities from their American Pharoah bounty, but what was even more important is how Zayat and Baffert managed the horse. They never forgot that they had an obligation to the sport and to his fans.

After American Pharoah won the Belmont, there really wasn't much more that he could accomplish, at least when it came to his reputation, his place in history and his value as a sire. He was a Triple Crown winner, had wrapped up Horse of the Year and was going to enter the breeding business as one of the most in-demand, valuable sires in history. Zayat could have retired him then, exactly what many owners would have done. But Zayat understood that he owed it to the sport to keep the horse running, even if the potential risks outweighed the potential rewards.

After the loss in the Travers, he was so despondent that he wondered aloud if he should retire American Pharoah right then. Again, he was grappling with what was practical versus what was right for horse racing. He changed his mind, kept him in training and Baffert and American Pharoah did the rest, winning the Breeders' Cup.

Though Sports Illustrated's editors will make the final decision, the magazine is allowing readers and fans to cast their vote on line and you can do so by clicking here.

American Pharoah is more than holding his own as he has garnered 29 percent of the vote, trailing only the Kansas City Royals, who have 34 percent. Yes, the Royals won the World Series, the first time they had done so since 1985. But there was nothing particularly extraordinary about their feat and a 30-year drought is hardly an eternity in baseball. Had the Chicago Cubs won the World Series we'd be talking about something entirely different.

Lionel Messi is next at 14 percent and while he is the world's greatest soccer player, his 2015 season doesn't seem to surpass what he has been doing for years. This is not a lifetime achievement award.

American Pharoah's biggest obstacle might be that he performs in a sport outside the mainstream that may not mean much to Sports Illustrated's editors. The list of candidates comes from, among others, baseball, football, basketball, soccer, tennis and golf, all sports that are no doubt more on the radar screens of the voters than racing is. Only one person from racing has ever won the award that began in 1954 and that was jockey Steve Cauthen in 1977. Somehow, in 1973 Secretariat was beat out by Formula One World Champion Jackie Stewart.

Though admittedly knowing nothing of what Jackie Stewart accomplished in 1973, I have to believe that the voters got it wrong that year by not honoring Secretariat. Forty-two years later they have a chance to make amends to racing and the Triple Crown and to do so with arguably the best horse to come around since Big Red. With what he did, with the way he was managed, with how he energized an entire sport, how can they not?