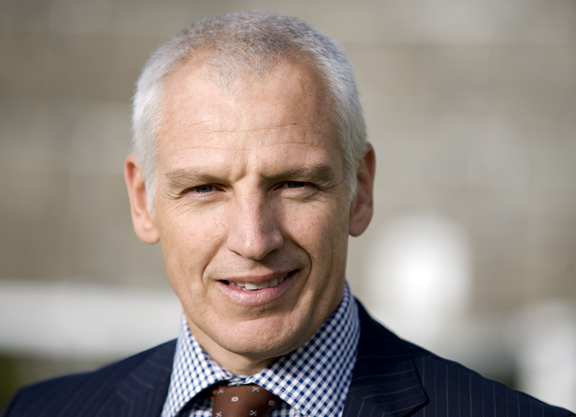 Growing up in New South Wales, Paul Bittar had an education and background in accounting and economics before spending 15 years focused on the governance and regulatory side of racing. After time as Chief Executive of New Zealand Thoroughbred Racing and on the executive team at Racing Victoria, he eventually landed in England as the Chief Executive of British Horseracing Authority. Bittar is now back in Australia as the general manager of sports partnerships at Sportsbet.

CC: What is one of your favorite racing memories?

PB: I am certainly fond of my first memory of being on course at Randwick with my grandfather and father, both of whom were really keen punters, and racing fans. Randwick in those days, when I was really little, just seemed so immense, so grand, and the race day was hugely interesting. Clearly, I got my love of racing from those first experiences.

CC: You have an interesting background, having worked both as a regulator and also a sports betting marketer.

PB: The past few years, I've been lucky enough to work on the wagering and commercial side of horse racing which has given me a different perspective. Although, I'd like to think that as a regulator that I took a fairly pragmatic and commercial view of the world and always seen racing, or certainly the economics of racing, through the eyes of the punter and consumer, which maybe not all regulators do.

I feel with both my domestic and the international experience, working as a regulator and marketer, that I've got a pretty well-rounded view of racing globally, and the economics of the sport in particular.

CC: Having worked and seen racing from so many different jurisdictions, what are any major differences that you can identify between the racing industry in Australia versus other countries?

PB: Australia kind of sits somewhere between those highly regulated, vertically integrated, monopoly betting markets, like a Hong Kong and Singapore, versus a completely deregulated market that has very little or virtually no tote market like Britain. Australia fits somewhere neatly in the middle, which, in lots of ways, makes it one of the most vibrant betting markets in the world because you have this real mix between the tote and fixed-odds markets.

CC: Going back to your regulator days, what are some of the important areas of control oversight for a governing body to be successful in regulating racing successfully?

PB: The role of the regulator is to not be seeking to catch people out, but it is to actually educate and inform them along the way, and be engaged with those that you license or regulate to actually ensure that people avoid breaches of the rules.

As a regulator you need to be fiercely independent, so having representatives of those that you actually regulate on regulatory boards has never made sense to me, but I think engagement with those stakeholders, and those that you regulate or license is really important. But I would definitely make the distinction between having direct representation onto boards.

CC: The U.S. market does not have a central body. Can you identify some of the key factors for having a central body govern racing?

CC: What are some of the biggest challenges you face when you head a racing regulatory organization?

PB: The key challenges that you have to overcome, or you have to accept, is that you're just not going to please most of the people most of the time because the nature of your role means that you will, from time-to-time, end up in conflict or disagreement with those that you're regulating. Challenges play out most pointedly because individual stakeholders see the world through a certain prism. And all of those are on the producer side of the sport.

As a regulator, one of the things you're predominantly dealing with [is] the producer side of the sport, yet you're actually trying to deliver a sport that needs to be attractive for consumers, and that really plays out mostly with the fixture list, and how you schedule fixtures, how many fixtures you run on the types of races that you run. So, it's very easy to end up in conflict with taking a consumer view of the world, and how you try and grow wagering revenue, which really funds the sport, versus those that deliver the sport on the producer side, and how they see the world.

CC: Is it hard to please all the stakeholders and remain impartial?

PB: I don't think it's that hard to remain impartial. I think it's near impossible to please all of the stakeholders.

CC: How important is it to separate the competitive integrity of horse racing from the gambling activities associated with the game?

PB: I think that racing is a bespoke betting sport. Its fixture list is designed largely around maximizing revenue from the sport. It's not like other sports that are not funded by gambling. So, if you're the AFL in Australia, then wagering is an important revenue stream to you, but it's tiny in comparison to what you receive from broadcast rights and ticket sales through the year. Whereas racing should not hide from that because I think it's actually one of the things that makes it unique and special.

However, I think if you look at the racetracks, they have a really consumer focused view of the world. I think there's a real balance there between genuinely consulting, and taking their views, and actually having them specifically involved in decision making related to policy and rules. I think the racetracks and the horsemen are hugely important inputs into policy making, and integrity, and regulation, but I don't think they should have the power over integrity and regulatory policies.

CC: You talked about earlier about having both a pari-mutuel as well a fixed-odd environment. How do those two coexist, and does one cannibalize the other?

PB: Betmakers in Australia run reasonably healthy margins, and not dissimilar to the margins that run on the tote for win and place. There has been this very significant growth in fixed-odds wagering on racing, and there has been a slow decline in the tote. But the overall market for racing has grown exponentially, and the revenues into racing have grown exponentially. It is really interesting in that sense that pari-mutuel, while it's on a slow decline, continues to be pretty healthy, and the fixed-odds market, while it's taken a big chunk of market share, has unquestionably driven huge market expansion because of product expansion. So, does one cannibalize the other, yes. To a very small extent in Australia that has happened, but overall the market has just grown exponentially, and racing and the punters are so much better off as a results.

CC: How important is data for punters, or access to data for betting purposes?

PB: Great question, and incredibly important. In Australia you're really lucky because getting access to racing vision is really easy. Then the next benefit is how that vision is complemented with data, and whether that's data that's part of the broadcast, or whether that data is delivered via your Sportsbet app, and all of the wagering operators, or data that's delivered elsewhere. Racing's a really data-rich sport, but it can be quite complex data. So, the way you turn that into data points that are easily digestible for the customer is hugely important.

CC: How important is syndication to the health of racing in Australia?

PB: Very. Australia has a huge number of owners as a proportion of the general population, so much more significant than other countries. Australians are prepared to invest in horse ownership, but they often do via a syndicate, or increasingly through micro-ownership. One of the great things that we know about horse ownership, is that even if you own .1%, you still refer to it as your horse. Australian racing bodies have done a really good job of encouraging that type of ownership, reducing the costs for people, and putting in place rules and regulations that encourages syndicates.

CC: How are young people getting connected to the game in Australia as you seem to have a very young demographic compared to other countries?

PB: Racing has done a good job in creating new events and wagering operators, particularly digital operators who naturally tend to attract younger customers, have done a very good job of converting them into racing fans. Australian racing now recognizes that the best marketers of racing in Australia are actually the wagering companies because they're the ones that actually have the direct interface with the customer.

CC: Any suggestions on steps racing in the U.S. can take to improve its image, and attract a new audience?

PB: I think racing in the U.S. has very much a participant-driven view of the sport. The horsemen hold an incredible amount of power. You have a tote-only model, which is not hugely consumer focused, and you have a sport that's regulated on a state-by-state basis. While U.S. racing has some incredible racing events, I think the learnings from Australia are that the more that you can take a consumer view of the economics of racing, and build out the economic model, and grow the economic model, then those benefits will flow to the participants. Whereas, it's strikes me that U.S. racing very much has a participant-driven model reluctant around fixed odds, reluctant around product expansion, terrible adherence to race times, and off times.

CC: What are some unique traits that horse racing has that should be exploited by stakeholders to generate greater interest from fans and punters?

PB: One of the unique things about racing, and taking American given the scale of the industry there, is that if you actually get greater coordination between the key racing bodies, adherence to race times, and product expansion through fixed odds or other, then there's actually this massive opportunity to put in front of sports customers a race every few minutes in a really scheduled and organized way with centralized broadcast, and centralized off times. That, in itself, would deliver a huge economic benefit for U.S. racing.

CC: What's the best professional advice you received, and who shared it?

PB: It came from Greg Nichols when I was working at British Horseracing when he was Chief Executive at the time. He recommended to me that I go and work in New Zealand, and one of his main reasons for suggesting that was because New Zealand had no money as an industry. He said to me, “It'll force you to be really creative, and it'll force you to be really disciplined about your decision making, and it'll really benefit you in the long-term by working somewhere that isn't flush with cash.” I realized on reflection that was a really, really good piece of advice.

CC: Lastly, if you were in charge for a day of running a central body of racing in the U.S., what would be the first action item you would do to improve the business financial side of the sport?

PB: I would do two things simultaneously. I would embrace fixed odds, and I would ensure an adherence, and a coordination of race times.