The Show Must Go On for New Vocations 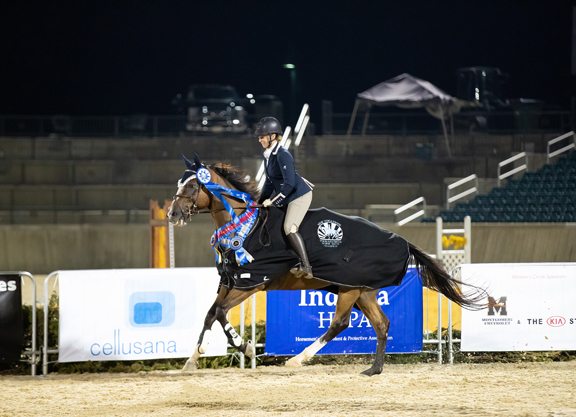 While most organizations, racing or otherwise, experienced a stagnation in business during the midst of the Coronavirus shut-down, Thoroughbred aftercare programs confronted quite the opposite.

When racing in most states was a giant question mark for months on end, for many horses that would have otherwise stayed in training throughout the spring season, the decision was made to enter them into retirement.

Since the first of the year, New Vocations Racehorse Adoption Program has brought in 240 horses to their rehabilitation and rehoming program, a 23% increase from last year's statistics.

Thankfully, they've also seen an influx in their adoptions, which are up 34% this year compared to 2019.

Despite a global pandemic, the show had to go on at New Vocations. And every show requires funding.

For nearly two decades, the respected aftercare organization has held an All-Thoroughbred Charity Horse Show in an effort to raise money for the general operation of their eight facilities which serve over 40 racetracks throughout the country.

“The New Vocations All-Thoroughbred Charity Horse Show is something that we've been doing since 2003,” said Andrea Mandella, New Vocations' Director of Development and Donor Relations. “The first show was at Turfway Park. It has grown into a really big event that we now do every year in September here at the Kentucky Horse Park.”

The five-day event featured 452 Thoroughbreds from over 26 states, some traveling from as far as Oregon, California, and Texas.

Class divisions include hunters, jumpers, equitation, dressage, as well as western and driving. “War Horse” classes are available to any retired racehorse that started over 50 times, or earned over $100,000. The Jockey Club's Thoroughbred Incentive Program (T.I.P.) also holds their annual championships in conjunction with the event.

This year, the show is scheduled for September 3-6, dates that have been set on the calendar well before the Coronavirus forced the rescheduling of the Kentucky Derby for September 5.

And while the New Vocations team is said they were looking forward to their annual event, and excited about showcasing the Derby festivities on the big screen of the Rolex arena, they first need to find the capital to make the show possible.

“We're struggling to find funding in the current climate with COVID,” Mandella said. “Right now our sponsorships are down 50%.”

Mandella said that the money raised during the show goes to the organization's general operations fund to provide feed, daily upkeep, veterinary care, and any other necessities for the horses in their program. The average cost to rehabilitate, retrain, and rehome each retired horse through the duration of their stay is $3,000.

One gelding that has recently gone through the New Vocations program is now working towards making an appearance at their annual show.

Gozer the Gozerian, a 4-year-old son of Astrology, was adopted last year by Leandra Cooper, the facility manager and trainer at New Vocations' home base in Lexington.

“He just had a personality that was like a magnet to me,” Cooper said while giving 'Gozer' a pat. “He was super sweet and right from the beginning, I knew that he was a horse that I was drawn to immediately.”

Unplaced in two starts as a juvenile in 2018, Gozer was given time off last year before starting full-time training for his second career in December.

“It became apparent pretty quickly that he liked to jump,” Cooper said. “He really likes to work. That's one of the things that's great about Thoroughbreds- they have this work ethic. They generally really are true athletes where they like to be in a program. They like to have challenges and he certainly is no exception to that.”

As Gozer continues to progress in his training, Cooper has her eyes set on looking to taking her gelding to the show in September.

“Our big target this year will be the New Vocations All-Thoroughbred Charity Horse Show,” she said. “We're really looking forward to competing at this show because it's so unique to have something where you're competing against all Thoroughbreds. Especially in an atmosphere of such grandiosity where you're able to be in the Rolex Ring, something you dream of competing in since you're a kid, and here we are able to have the opportunity to compete with all these other Thoroughbreds.”

Both Cooper and Mandella spoke of the unique atmosphere the show has developed.

“It's really amazing to be able to take horses that come off the track with several different career paths,” Mandella said. “Some of them were competitive and winners, some were unraced, and some just weren't interested in racing and have gone into second careers and all of a sudden they're excelling. So everyone has a different, unique story, which makes it amazing to watch 400 of them out there doing their thing. And that's what we strive to provide for them.”

Cooper agreed. “It feels fun and inclusive, and it's amazing to see all the different levels that these horses are able to compete at and all the different varieties. The people are really committed to the breed and it's just a celebration, in so many different ways, of their accomplishments. It's a neat show, and it's the only one like it.”

The team behind the popular event is pushing now more than ever to find sponsors. While donations can be accepted at any time, the deadline to have a sponsorship recognized in the program is Friday, July 17.

“Typically our donors come from all over the country,” Mandella said. “They're Thoroughbred owners and breeders, people who have adopted through our program and are showing their horses at the event, and people within the industry that support us, like veterinarians and feed suppliers.”

The majority of sponsorships range anywhere from $100 to become a class sponsor, to $50,000 to be the title show sponsor. A number of different sponsorship opportunities are available at a variety of differing donations.

Mandella said that the average cost to rehabilitate, retrain, and rehome a retired horse through the duration of their stay in the New Vocations program is $3,000.

“We're hoping that our previous sponsors and maybe some new ones will decide to get involved and help us continue to put on this show that we find so important,” Mandella said. “It gives us the ability to illustrate how these horses go from the racetrack to a second career. To put them all together and let them compete against each other is a really awesome event.”

For more information on the event and how to participate, click here.

For those interested in becoming a sponsor for the New Vocations All-Thoroughbred Charity Horse Show, contact Andrea Mandella at [email protected]