The Road to the Kentucky Derby…Sort Of… 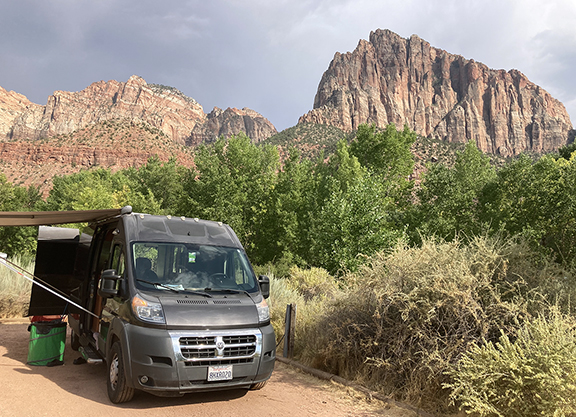 This intrepid TDN correspondent has just spent the better part of 10 days on a road to the Kentucky Derby.

Well, not exactly THE road to the Kentucky Derby. Rather, a long road trip from Los Angeles to Lexington via some of the country’s most awe-inspiring national parks and monuments, arriving in the Bluegrass State a week before the Derby. The reason? To deliver to the doyen of XBTV, Zoe Cadman, her beloved RV, “Burt.”

What follows is an account of this American odyssey. A story of toxic algae and sandstone cathedrals. Nose bleeds and rhinestone rivers. Slasher the bear-killing feline and sage advice from one of Kentucky’s sharpest bloodstock gurus.

If you’ve ever wondered what the inimical delights of being roasted alive feel like, I strongly recommend the largely desert trek from Los Angeles to Utah’s Zion National Park in triple digit heat. In what should be an abject lesson in crass stupidity, yours truly, disbelieving the 112 degrees Fahrenheit sign flashing on the RV dashboard, decided to stick his head out the window to “test the waters,” only for the flesh begin to begin sliding off his skull like a well-boiled chicken.

Zion turned out to be just as toasty, but while much of the drive to Zion has a distinctly Breaking Bad feel about it–especially the brief gasoline stop on the fringes of Las Vegas–Zion has much to take the mind off the open oven door, not least of all the vast snaking Canyon slicing through the middle, which is really quite lovely-not just lovely. Breathtakingly stunning. Great hulking cathedrals of sandstone jut into the sky, some as old as 2 million years, that turn all sorts of purples, reds and oranges as the sun rises and sets, before providing a shadowy backdrop to a crystal-bright sea of stars. That night, the Milky Way was as clear as I’d ever seen it. 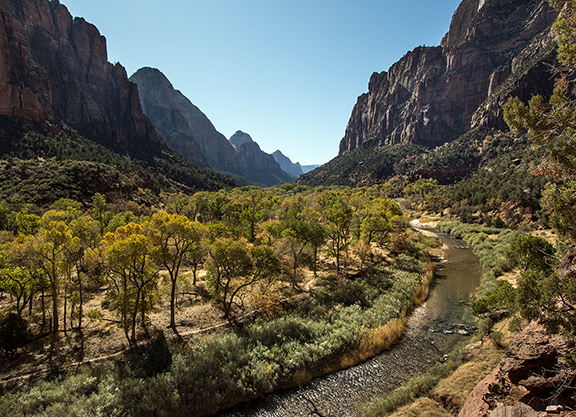 Our campsite, the Watchman campground near the park outskirts, is mountain flanked on all sides with the cool, refreshing Virgin River running through the middle. But this being the annus horribilis of 2020, there was no heat-escaping dip into the waters-this year, this river contains record levels of a murderous little algae called cyanobacteria. Warning signs are posted up and down the river to instill terror into the heart of wilting campers, and while park rangers reassure visitors that no one really knows just how this little devil operates, one toggled ranger told me all I needed to know: “I ain’t going in there,” he said, with a leery grin.

Alas, with only one evening in Zion, there was little time to strike out and explore. One popular Zion destination seems to be “The Narrows,” a scenic portion on the other end of the park. We had time only to hike the Pa’rus Trail at a wide-floored section of the canyon beyond Watchman, which dances with long shadows as the sun yawns over the canyon lip. And then it was time to leave-northwards, to the Montana portion of Yellowstone…

I’m sure I’m not alone in this, but on long road trips, I find myself staring at the countryside wondering whether any of the passing properties would make good training centers. You know the deal: nice green pastures, plenty of room for airy barns, and the most important thing of all, long climbing stretches that can be transformed into seamless gallops.

I can safely say that at no point between Zion and Yellowstone was I convinced that I’d discovered the next Ballydoyle.

In southern Montana, Rainbow Point is a small campground a short stop outside of the town of West Yellowstone–a delightful little place that hides all of its charms when approached late in the evening after a nine-hour slog of a drive. It’s in the middle of thick woodland, and a twilight drive through this gloomy morass evokes the stories of Nathanial Hawthorne-all witches and black magic and young men of questionable virtue meeting sticky ends.

Rainbow Point campground is presided over by O.G. (Old Guy), The Grizz (O.G.s lovely wife), and their liberally fed cat, Slasher, the size of a beer keg. According to O.G. who signed us in that dusky evening, The Grizz is thus called on account of her morning coffee requirements, potentially combustible if not satisfied promptly. When I asked to meet Slasher, staring longingly at us through a screen door, O.G. shook his head, regretfully: “Slasher protects us from the bears,” he said. “If I open the door, she’ll be gone, and then there’ll be no Grizzlies left alive in this neck of the woods.”

O.G. has a touch of Captain Ahab about him, only with two working pins and a keen, knowing eye as though he’s spent a lifetime on the high seas. When I asked O.G. if there’s anywhere outside of Yellowstone that’s a must-see, he peered at me through bushy eyebrows and suggested Quake Lake, just down the road, created in a landslide during the earthquake of 1959, when as many as 21 people were buried alive. I thanked O.G. for the uplifting suggestion, assured him we’d sleep on it, then made our way to the campsite to be assaulted by an army of Velociraptor-like mosquitoes.

Luckily, Rainbow Point’s lakeside charms become evident during the day, and the mosquitoes, having had their fill of human blood at night, take a well-earned siesta. The lake doubles as a water-sport enthusiast’s playground. If you’re seeking activities of a more earthbound kind, however, the vast wonderland of Yellowstone is a mere 30 minutes away. Because of the wildfires skirting the park, many of the roads leading to the best day-hikes were closed, but ample recompense appeared in the form of a long hike to Observation Peak-a rocky, mountainous climb of nearly 10,000 ft to stunning 360-degree views of the park. 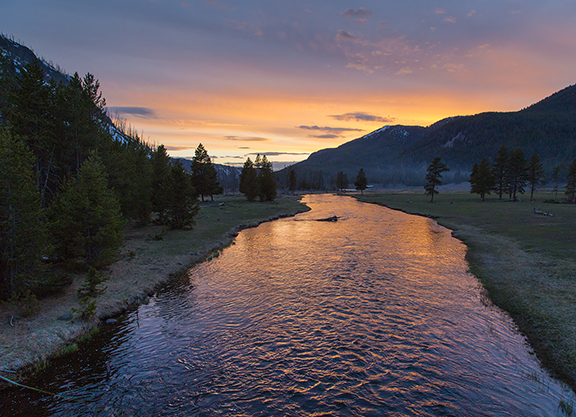 The first part of the hike is a gentle stroll through shady woodland and sunny meadow to Cascade Lake, a great, glistening sapphire bejeweled with pearly white swans-very pleasant, as long as you don’t suffer a Niagara-like nosebleed with only a mask to stem the flow. When this same blood-soaked rag was subsequently employed on occasion during the hike, I had to reassure startled passers-by that I was neither COVID positive nor consumptive.

Later that evening, drunk on the views, exhausted, sore and with less blood in my body than a granite boulder, we returned to Burt only to be met by a cat’s chorus of a broken and manic carbon monoxide alarm. These things are harder to disable than the Fort Knox security system, let me tell you, and respond angrily to kicks and stick beatings.

Our last full day at Yellowstone was spent ogling the steaming geysers before we took to the Madison River–one of the secluded turn-offs perfect for pitching up a chair and grabbing a handful of cold beers as the sun disappears behind the mountains. The river appears different at different times of the day. In the bright sunshine of the early morning, it looks like great armfuls of rhinestones have been scattered across the top. In the setting sun of late evening, it’s as though a massive vat of molten gold has been tipped into the waters, melting away down river.

If you don’t want to leave Yellowstone, the journey from there to the Black Hills National Forest in South Dakota can seem quite the drag. Uneventful, too. Though it does throw-up the odd question. For example, does the flashing sign saying “Branding Day” hanging from the middle school in the small Wyoming town of Moorcroft refer to the cattle or the school children themselves?
We arrived in South Dakota late in the evening. The snaking drive through the moors-like Wind Cave National Park was guided in part by the large dark silhouettes of bison grazing the roadside, like fat ghosts in the pale moonlight. Our first destination was a remote campsite on Cold Creek Lake-perfectly serviceable (despite the night-time slasher movie vibe), and not a patch on the Oreville campsite where we stayed the subsequent two days.

Nestled in the mountains, Oreville is a private, quiet little hideaway, perfect for pitching a tent, with tall thick hedges between sites. It’s also pretty central to the sorts of places and things you’d want to cram into two short days, like a trail ride in the shadow of the Buckhorn Mountain.

It’s very close to Mount Rushmore, which is perfectly nice ‘n all, but it still can’t compare to the majesty of the valleys, forests, canyons and mountains surrounding it. We stumbled upon the Centennial Trail-a 111-mile hike that spans Wind Cave National Park to Bear Butte State Park, encompassing everything in between, down valley side and up craggy hill, over railway lines and through quiet meadows scattered with lazy deer as the sun sets over the surrounding Black Hills.

The rather wary and taciturn campground host–a trainer in another life–said something the first day that seemed rather prophetic: “We’ve got a saying here: ‘If you don’t like the weather in South Dakota, just give it minute.'” And so it proved the last night, when in the early hours, echoes of distant thunder reverberated around the canyon. Not long after, a lightning storm hovered directly above, producing an electric lightshow that sparked for half an hour, during which time, hail pulmmeled the roof like stirrup irons flung from out of space.

By the time we left the next morning, the storm had passed, leaving in its wake the steaming Black Hills forests draped in mist, which makes a dramatic backdrop to the old western saloon labelled the “Degenerate Slide Headquarters.”

What’s to say about the two-day marathon trek from South Dakota to Marette Farrell’s Lexington abode? Thanks to the giant chopping boards of Iowa and Missouri, I almost became a flat-earther. Luckily, Kentucky has much more to offer in the way of hills and dale–all very novel, especially when it’s your first-ever visit to the Bluegrass state (I’m ashamed to say).

In one day, Ms. Farrell, our trusty host, led a best-of whirlwind visit of a number of farms, which included the homes of some old California friends. At Lane’s End–thank you Alys Emson for the guided tour–City of Light looked happy as a clam (though a tantalizing glimpse of Accelerate and Catalina Cruiser’s empty stalls mean I’ll just have to come again to see those former denizens of the West Coast). At Airdrie Stud, Pacific Classic winner Collected looked burly and satisfied and slathered in mud. Not to be ignored, Creative Cause put on a gymnastics display with a distinct Simone Biles-like flair. (See Marrette Farrell’s video below).

And then it was over. Odyssey complete. Burt remains in Lexington ready for Ms. Cadman’s return journey (and rid of any bad juju, thanks to an airing with sage on the sage advice of Marette). Yours truly, however, is now back in California, itching to get back on the road again…