Keeneland's Premier Book in Every Way: September Book 1 by the Numbers 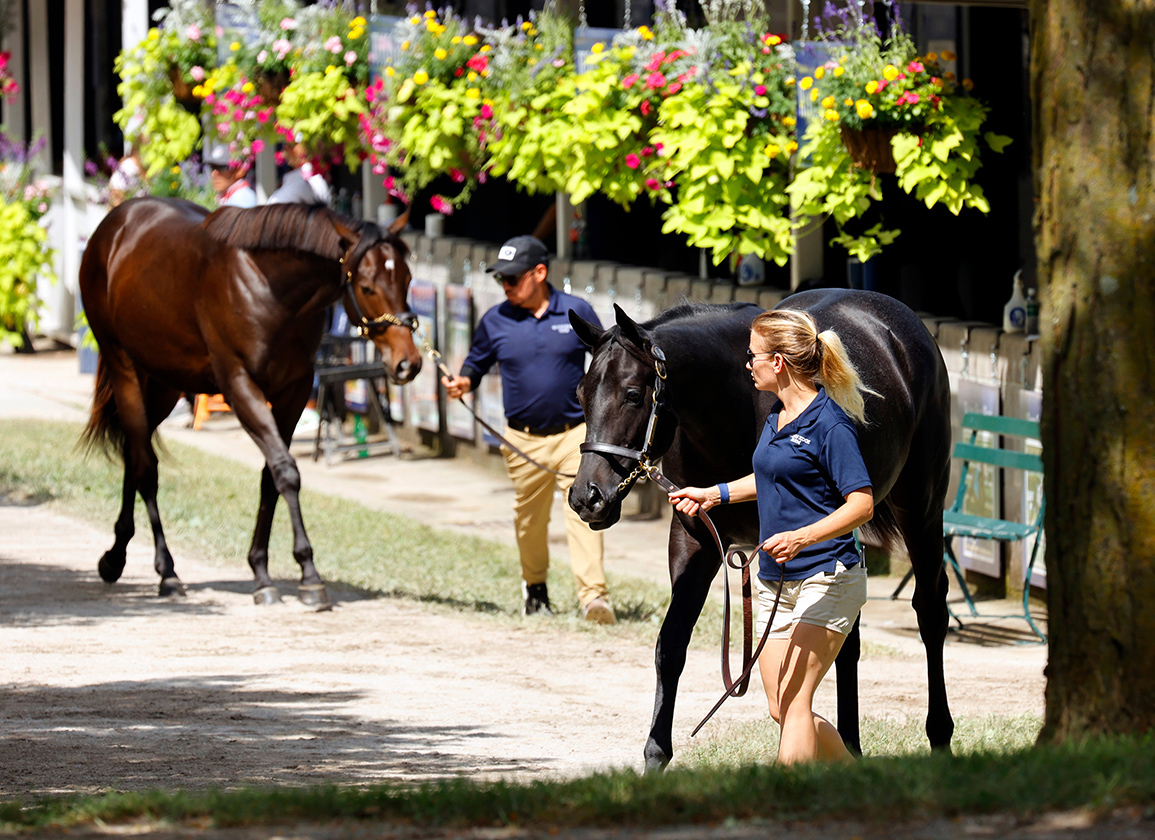 Here's a conundrum for you. When does your outstanding yearling become merely one that stands out?

It's something the Keeneland sales team find themselves asking a great deal right now, out on the farms, during the annual process of sieving entries into the right tier of the world's biggest yearling catalog.

Time after time, they run into the same, nearly superstitious nervousness among some consignors about September Book 1. The action is too tight at the top end. Let this guy be a big fish in a smaller pond.

Well, that kind of talk is hardly unfamiliar to Tony Lacy and Cormac Breathnach, respectively Vice President of Sales and Director of Sales Operations, in that both took up their appointments last year from positions with leading consignors. On being invited to the other side of the dais, however, Breathnach decided to test perceptions against the data.

He did so with an open mind. If there turned out to be genuine vulnerabilities, whether in the format of the sale or a horse's position within it, then Keeneland would do something about it. But where he found misapprehensions, equally, then those would be clarified.

“We wanted to look at the sale and its performance as objectively as possible,” Breathnach emphasizes. “To look at facts, not preconceptions. We know how strongly some assumptions have been propagated over the years and we need some objective analysis. Our goal is to identify where any weak spots might truly be in the sale, and how to combat those: whether by altering start times, or the numbers in a particular session, or marketing focus, anything that Keeneland might do to help offset any dead spots.”

But the headline discovery is unmistakable. There should be no cold feet about Book 1. Just best foot forward. In fact, wilfully seeking relegation to Book 2 can be downright counter- productive.

On joining Keeneland a year ago, Breathnach first ran the basic numbers on the relative performance of Books 1 and 2 over the previous decade. In that time, of course, there had been all manner of format changes–with Book 1 variously allocated one, two, three and four sessions; and Book 2 either two or three–and evidently most people now agree that it is time for some consistency. Remarkably, however, Breathnach found that the Book 1 brand had crushed Book 2 every single year, regardless of how the elite stock had been spread. 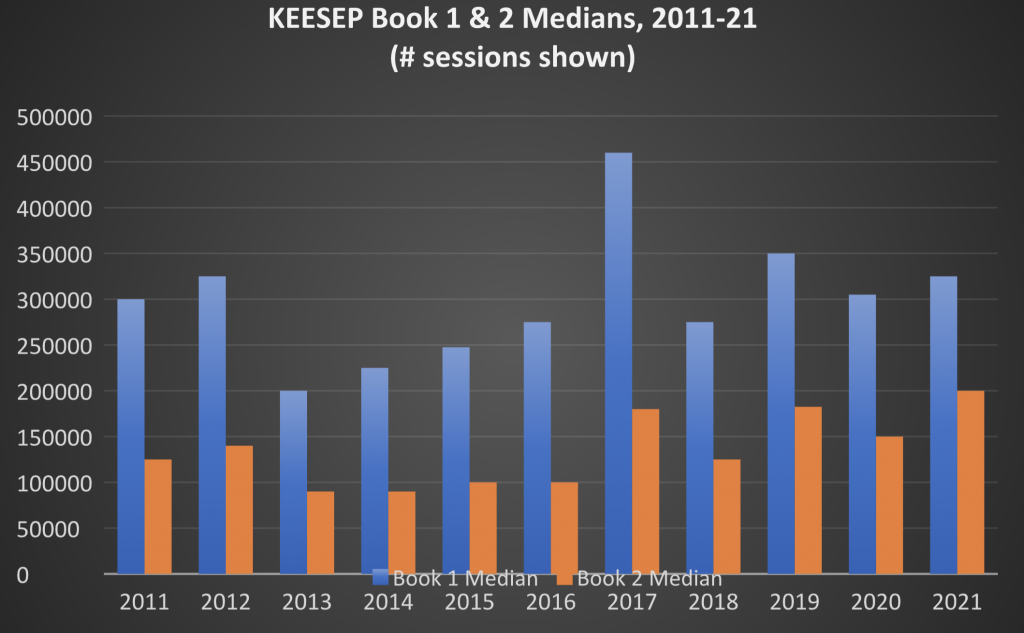 Having established the power of the Book 1 brand, Breathnach set out on a deep dive through his first September Sale at Keeneland. What could be learned by comparisons made Book to Book, session to session, and even within sessions?

The real revelation came in the modelling of buyer activity, which Breathnach measured by the number of radiograph views (blue in the table below) and the number of videoscope views exceeding 30 seconds (orange). This is a most interesting and instructive graph, showing that purposeful prospecting is nowhere higher than across both sessions of Book 1. 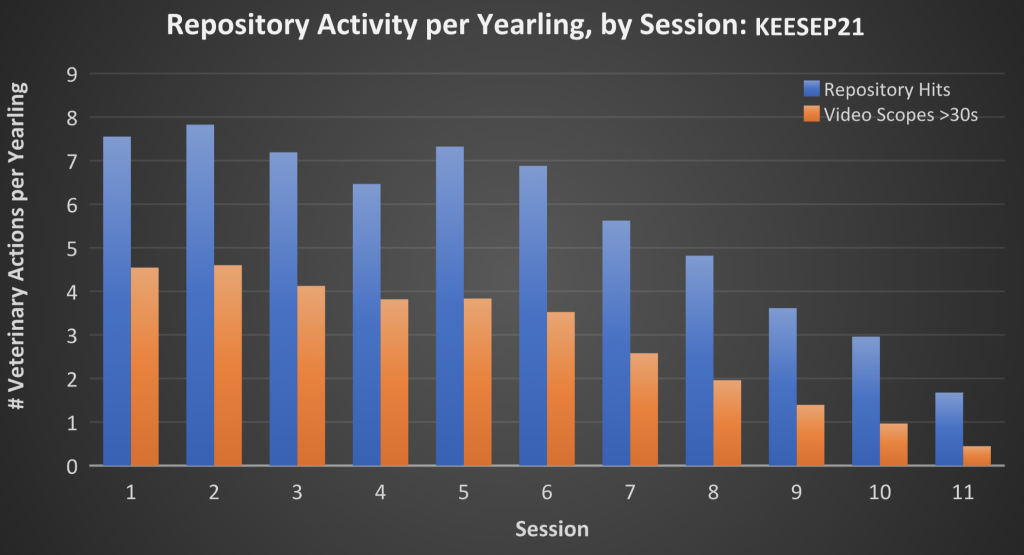 “The repository data show convincingly that a large volume of buyers are here, and, more importantly, are active in Book 1,” suggests Breathnach. “Some sellers tend to feel that a higher RNA rate might suggest otherwise, even though the RNA rates in Books 1 and 2 over the preceding 10 years are virtually identical. But buyers are not in the habit of vetting horses without intent. This shows that they're here, and they're here to buy from the beginning.”

While some vendors are convinced of greater purchasing depth in Book 2, Breathnach argues that some bumper transactions in the opening Book would never be made about the same horse in the next one. Several important principals, if they have come at all, tend to have left town by Book 2. He points to recent Book 1 purchases for $1 million and $800,000 that were made simply because those principals were on the spot for Book 1 only.

Breathnach urges sellers (and buyers) to grasp how the complexion of Book 1 is changing: “If you compare Book 1 from September 2019 and 2021 side-by-side–skipping 2020, when international travel was so restricted–buyers who contributed close to $60 million worth of purchases from 2019's Book 1 did not participate in 2021, for various reasons. But that deficit was backfilled extremely well, primarily by domestic racing stables: people like Vinnie Viola and Mike Repole, and new entities like the BSW/Crow Colts Group, among others.

“With more exposure for the sport of horse racing and the improved purses, it was refreshing to see domestic end-users so active from the very beginning of the sale. Many vendors sold horses very effectively in the $400,000-$750,000 range for example. Of the first 15 horses through the ring last September, 12 sold, to 11 different domestic buyers.”

This feels huge, in the perennial debate with nervous vendors. Breathnach believes that some people may set too high a bar when considering their stock for Book 1: that every yearling entrant has to be 'perfect.'

“What we are looking to sell in Book 1 is as many good physicals as possible,” he says. “Pedigree and sire power are important too, to a degree, but athletes are what the buyers are looking for in Book 1, and that's what they are going to pay for. They can't all be by the same six-to-eight sires because we have a deep international buying bench, as the repository data shows. If the median is $325,000, like in 2021, and you've got a $400,000 horse, Book 1 is where your market is. You're an outlier anywhere else.”

In terms of Book-to-Book trends, Breathnach focused on medians and RNA rates as the most reliable gauge of sale performance. As this next table shows, the median conformed pretty neatly to the status of each Book. The RNA line (orange in the table) also descended as the sale moved forward, but that's pretty much as you would expect given the high production costs of elite yearlings, whose breeders are often equivocal about selling at all. (Moreover at an auction that broke records for average, median and completed sales, there may never again be an RNA rate like the one achieved in the second week of last year's September Sale.) 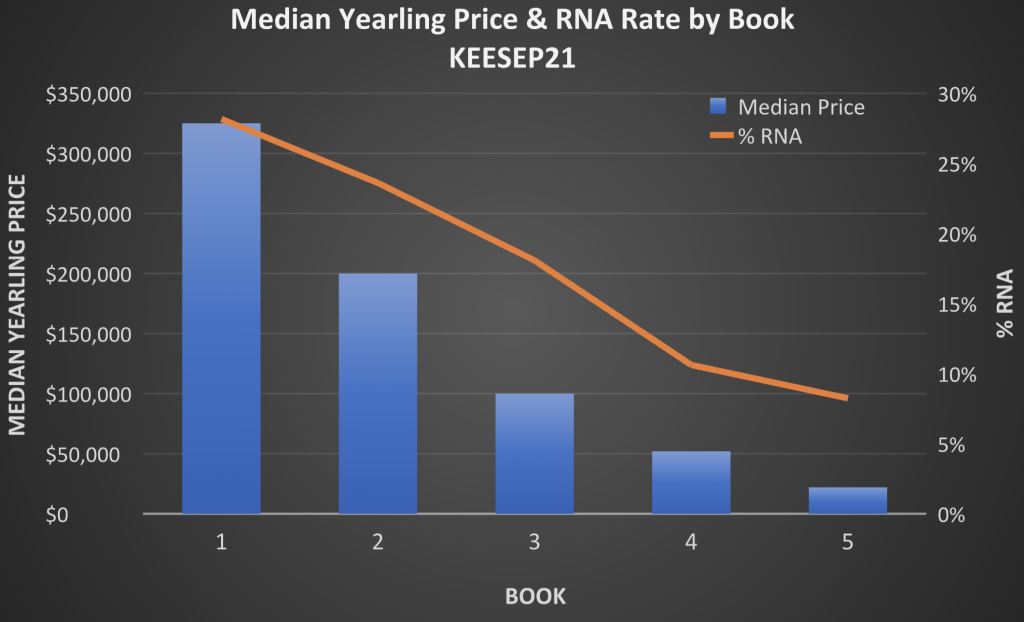 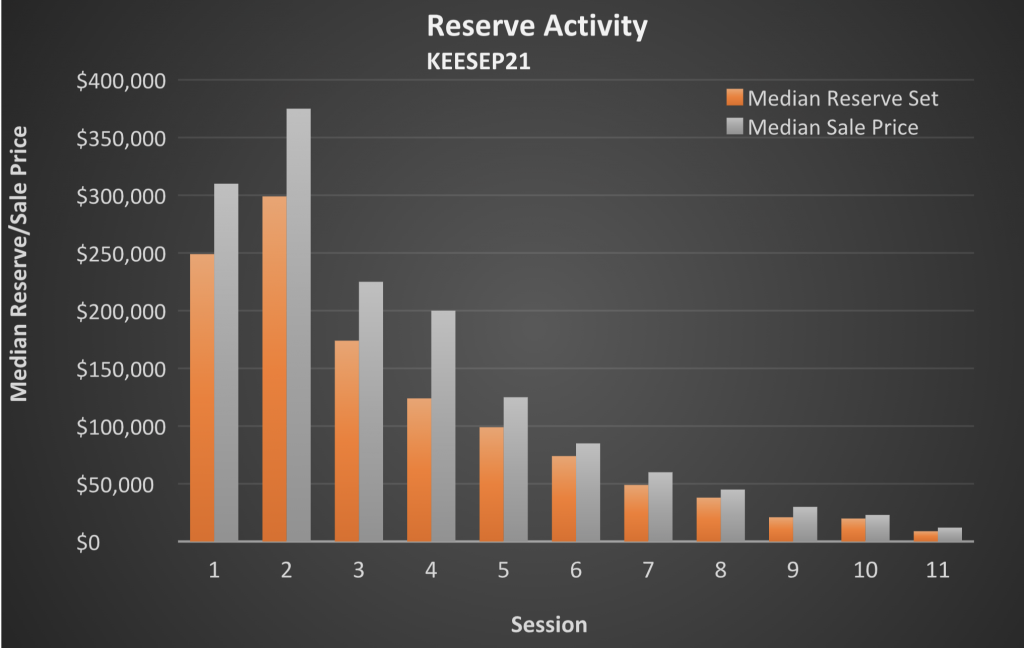 Another nervous assumption is that there are inbuilt momentum swings even within a session. Vendors typically dislike slots at the very beginning or end of the day. Again, Breathnach investigated last September. He identified the first and last 20 hips that sold in each session, and compared them to the 20 that sold right in the middle of that session. In doing so, he compared the average and median price of each of those subgroups as well as the likelihood that a horse sold for at least 50% above its reserve, what might be termed the “pleasant surprises.”

Where there can surely be virtual unanimity is that the sale finally needs a more settled format. That's certainly Keeneland's intention for 2022, with the first two Books once again expected to be spread over two sessions apiece, with Book 1 opening around 1 p.m. (as was the case last year).

“Industry-wide, almost everybody agrees that we need a consistent format, and that includes our sales team,” Breathnach concedes. “Based on the performance of last year's sale, and particularly from a stabling point of view, we feel that the format we landed on was very positive.”

Obviously there will always be a certain critical mass of yearlings eligible for the two opening Books. And Breathnach feels that there are two important differences between the format of two sessions apiece, as opposed to commingling over four days.

“You get too many peaks and valleys [with a four-day Book 1],” he explains. “There aren't 1,000 really top-end horses, so the sale gets too inconsistent, and it's hard to build momentum. And, maybe more importantly, when you use the entire barn area like that, it's very hard for buyers to patrol the whole of Monday, Tuesday, Wednesday, Thursday, and then to do their shortlists and their second looks, when they're going from Barn 1 to 49 on every pass. Some sellers might think they would prefer that–but the horses are just too spread out that way, and several of them are going to be missed.”

So if 400 won't necessarily be the precise number of elite horses out there for Book 1, it's a number that gives everyone a chance–buyers and vendors alike.

“It's a manageable number and you can start a 200-horse session at 1 p.m.,” Breathnach says. “That allows extra time in the mornings for buyers to get their second looks and vetting done, and to get ahead with Book 2, and not be constantly falling behind. And it gives these good horses the time they deserve. They can be stabled loosely in some of our best show areas, with the time and space for people to show them to the best of their ability.”

The lunchtime start also allows atmosphere to build for the beginning of what is, after all, an occasion of great theater.

“Tony and Shannon [Arvin, president and CEO] and the entire team, we want to make sure there's a buzz to kick the sale off,” Breathnach says. “That is a priority. The September Sale is a significant event for Lexington and this area, but it's critical to our customers and it deserves to start off the right way.”

As he mentions, this is all a team effort. Besides Lacy and Breathnach, the inspections so vital to the balance of these Books are being shared by Mark Maronde, Dean Roethemeier and Kyle Wilson, with valued external perspectives from the experienced Frankie Brothers and Julie Cauthen. And of course there are also important contributions from other vital cogs in the Keeneland machine like Gatewood Bell, Buff Bradley and Ryan Mahan. While every sales company candidly strives on behalf of the vendor, once a horse is on the dais, in planning an auction these people must try to achieve an equilibrium between seller and buyers.

But obviously there's a limit to how much the hosts can assist trade.

“We do understand that there's a lot of anxiety and opinion among breeders and consignors about book placement,” Breathnach says. “Our job is to put the whole sale together, which requires taking a broad view, and factoring in the requirements and preferences of buyers and sellers alike. The kind of things we're talking about can't create a strong market, of themselves. But we can do our best to give it space to breathe.”