The “Pep” Back “In the Step” of Santa Anita 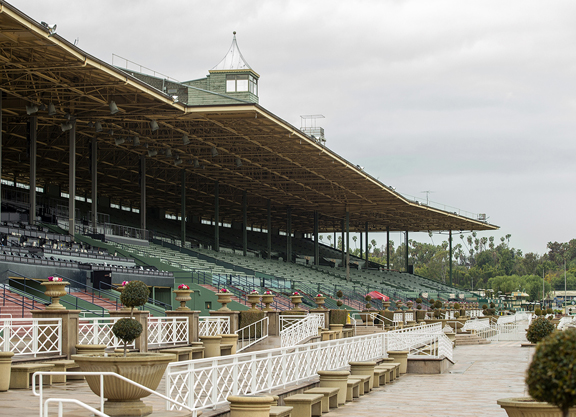 California is an island, they say. Well, for the past few years, it sure has felt as though the industry in the state has been left to circle the choppy waters surrounding this island in a leaky vessel. At times, these leaks have threatened to submerge the boat completely–like the Santa Anita welfare crisis that erupted last spring which led to a sweeping set of reforms that have improved safety but pushed some cash-strapped operators further along the financial gang-plank.

At other times, stormy seas have proven galvanizing, bringing this industry's motley crew together with saucepans and buckets to scoop out incoming waters. Think back to the San Luis Rey Downs fire of 2017, and the outpouring of helping hands and dollars in response to that disaster's wicked toll.

It's fair to say this global pandemic couldn't have darkened the skies at any worse time for the industry here, heightening those existential fears that are ever present in many minds. It's no surprise, then, that the resumption of racing this past weekend–and with it, the kick-starting of the economic engines–has had something of a rallying effect.

“People have had a pep in their step the last couple of days training in the morning,” said Don Chatlos Monday morning.

The trainer regards himself as one of the luckier ones during the near two-month suspension of live racing.

“I'm in the fortunate position that I'm in a private job for [owner Larry Best], so, the stress of not racing wasn't as bad for me as it was for guys with 20 different owners,” he said. That, and the uncertainty.

“You have an end game now–you're actually training for something,” he added.

“I'm just really proud of everyone in Southern California, stepping up the way that they did,” Chatlos said. “No negativity–nobody was complaining about the protocols. Everybody was just ready to go, and as it happens, it was a good weekend.”

Few had a better weekend than Mike Smith (unless your name happens to be Flavien Prat). Smith walked away with four victories next to his name, including a win in the Evening Jewel S. on Jeff Bonde's Smiling Shirlee.

“Everything worked out much better than we could have even asked for, to be honest with you,” Smith said, of the protocols put in place–a veritable game of equine hot potatoes–to keep the backstretch community separate from those on the front side. “Everybody did a great job.”

Part of these new procedures included the creation of a “restricted zone” for the valets and jockeys–what amounted to a little trailer village, two people to each, a different meal delivered each night from a different local restaurant.

“Doing our bit to help local businesses,” Smith said. “We were allowed into this room, it's called the 100 to 1 club, and it overlooks the racetrack,” Smith added, of the evening activities. “At night it's gorgeous, with the lights–so pretty. Just nice to sit up there and relax.”

The weekend could have looked very different for assistant starter, Mike Sherlock, had quarantine restrictions for the valets and jocks similarly applied to the gate crew–an idea floated as the final set of protocols were being nailed down.

“That was my biggest worry,” said Sherlock. “I work Santa Anita and I work Los Al[amitos] at night. My wife is pregnant again, I have a 2-year-old child, and I have a carrot business. For me, I wouldn't have worked, truthfully.”

Those worries didn't come to fruition, of course, and in the end, the practicalities of his job changed very little, he said. Sure, between races each went to their individual cars.

“No hanging around together,” he said. Rather, the biggest change constituted a glaring absence in the shape of a octogenarian who's been part of the Santa Anita furniture since Eisenhower was in the Oval Office.

“Huey Barnes has not been back to work yet. He's not one to risk,” Sherlock said, alluding to the assistant starter's age (86), and his increased vulnerability to Covid-19. “But oh yeah, it was nice to be back–for everybody.”

All of which leads to this question: what kind of political balancing act did it take to get the show back on the road?

“Oh mate, at the end of the day, it was pretty precarious,” said Aidan Butler, executive director of California Racing Operations for The Stronach Group, zeroing in on the no-man's-land between the day Santa Anita announced that racing would resume May 15, and the official go-ahead from LA County.

During that window, of course, officials extended the county's stay-at-home order, casting a pall of doubt over the resumption of live racing on the proposed date.

“It was brutal because I'm trying to keep everybody motivated on our side,” Butler said, describing daily talks with LA County Supervisor Kathryn Barger's office. And the pressure went both ways–indeed, Barger faced the potential loss of political capital reopening the track for live racing when other industries in the County remain shuttered, Butler explained.

“I can't speak highly enough of Supervisor Barger's office and her chief of staff–they were really, really good with us,” he added. “Not just with us, the industry.”

And now? “Never seen such a positive bunch of people in my life walking around the backside,” Butler replied. “I'm enjoying it while it lasts!”