Smullen: Donnacha Was Only Getting Better 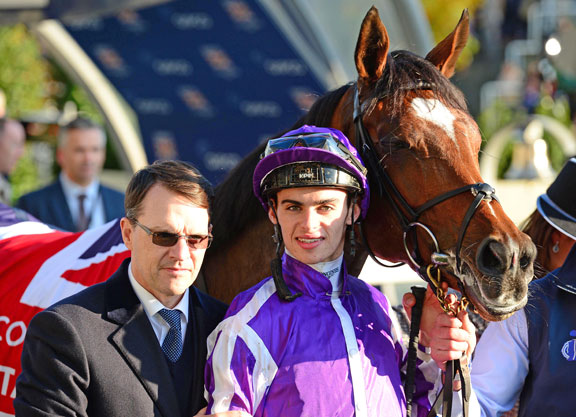 The announcement of Donnacha O'Brien's retirement from the saddle didn't come as a huge surprise but I am nevertheless sorry to see him step down. I think we all understand the difficulty he has in keeping his weight down but I'm not sure that everyone quite appreciates the effort and the commitment that went into him doing that. It was really tough for him to be able to continue for this last year.

Full marks to Donnacha to have got through the whole season riding as well as he did, to win the jockeys' championship for a second time and to ride the amount of Group 1 winners that he did. He has very much gone out on a high.

There's no question that knowing that you are riding good horses is a huge incentive and it keeps you going on the days that you are wondering if it's worth it or not. To have access to top-class horses is a huge help, but that said, no-one should underestimate the effort that other riders make as well on a daily basis just to make a living.

Even from a really young age, Donnacha was always an aggressive rider. He probably had a little bit more flamboyance than his brother Joseph, a little bit of an edge to him that made you realise how determined he was and that he was going to succeed right from the early days. What makes it disappointing for him to be retiring now is that he was a rider who improved with every year. He makes a joke of it himself, that as an apprentice he probably wasn't as natural as Joseph looked from day one, but Donnacha got better with every season that went by and I think he was riding at the peak of his powers this past season.

The amazing thing is that Donnacha has achieved all that he has in such a short period of time. To think that he's only 21 is quite remarkable. The other side of that is that it's very sad that a jockey of his calibre and ability has to retire from race-riding at that age. Okay, Donnacha knew that his career as a jockey was never going to last long, but it again raises the issue that the riding weights must be reviewed. Though Donnacha would probably be the first to admit that they would never really be raised enough for it to be feasible for him to continue long term, it highlights the need for the weights to be tweaked. We shouldn't be losing quality riders at such a young age. It's not good for racing.

In my opinion there's no vacancy now at Ballydoyle. What I think will happen, and what I would like to see happen, is for the riders who are there already to get more opportunities than they have had in the past. Aidan O'Brien doesn't look past his own stable and his own riders but obviously Donnacha and Ryan Moore have ridden the bulk of the horses. The stable stalwart Seamie Heffernan is still there and more opportunities will come along for him, but I think Wayne Lordan could be the main winner from Donnacha's retirement, and rightly so. We've seen over the last number of months that Wayne has been riding so well internationally, and his ride on Iridessa (Ire) in the Breeders' Cup was of the highest quality. I think he'll just step into that position along with Seamus. Obviously there's also Padraig Beggy, and he's won the Irish Derby and an Epsom Derby in the past few seasons so he will also probably have more rides.

But Donnacha's stepping down from the saddle will certainly open up the opportunities for other riders in Ireland. Joseph will be looking for another jockey as Donnacha was almost riding 50/50 for him and his father, so there will be a void there. Shane Crosse, who has had a good season as apprentice to Joseph, could well benefit from that, and Declan McDonogh has been riding for Joseph quite a bit over the last season. So the majority of the business of that one person who was champion jockey and riding so many winners may now well feed three or four different jockeys. I'm sure the weigh-room will be a little bit relieved that Donncha has gone as it does open up the situation!

Aidan now goes from the situation of having Donnacha as one of his main allies to one of his main rivals. I'm sure it strikes fear into a lot of trainers in Ireland that another O'Brien is joining the training ranks, but their success is not by chance. The pure dedication to the job and the attention to detail from both Aidan and Annemarie is extraordinary. Donnacha will do as Joseph has done and will bring all those traits he has seen all this life to his new business. Not for one moment do I doubt that he will be a huge success as a trainer. Aidan will have another son very much snapping at his heels, I'm sure.