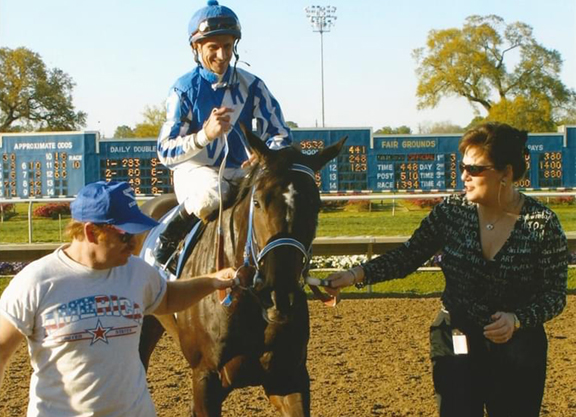 Back in the days when I was in high school, I would work in the racing office at Jefferson Downs in the mornings as an entry clerk. This was before the days of computerized databases and electronically keyed-in entries. Entry blanks were bound by red glue as thick pads and filled out in pencil. Each form filled out one by one, as the jockey agents and trainers drifted into the racing office to do business. Entries were made in individual stalls for privacy and usually in a hushed tone so no one could overhear the potential competitors filling the races offered for the race day to be carded several days later.

The jockey agents were a cast of Runyon-esque all-stars. “Sad Sal the Horseman's Pal” who had spent time in “Mandeville”…the mental hospital, Roland “Buck Eye” Dagrepoint, Lloyd L. “Cuz” Nixon, John Giambelluca, along with others would keep things lively as they entered trainers' horses for the day after securing calls for their riders. Some of the trainers would enter their own. There are hundreds of stories about those guys and those days, but the one for today begins in those days and came to a close Mar. 25, 2021.

In the 1970s, there were two Larry Melancons riding at Jefferson Downs during the summer race meetings. As an entry clerk, it was a problem because inevitably there would be confusion. As things went, the disclaimer to distinguish between the two by whomever was entering was to signify the “good” Larry Melancon or just plain Larry Melancon. The “good” Larry Melancon had already made a mark as not only a talented rider destined for bigger things, but as truly a good person in how he interacted in his life.

The “good” Larry made a step up in his career by the end of the 1970s and rode mostly on the Midwest circuit. He rode at Fair Grounds in the winter, Oaklawn, Keeneland and Churchill Downs in the spring and Arlington Park in the summer. He became a fixture at Churchill Downs riding in four Kentucky Derbies with his best finish a fourth place in 1976 on Amano. He became a valued contributor in the development of many top horses for various trainers through providing accurate insight of soundness and fitness during morning workouts.

Truthfully, I had lost track of Larry in the 1980s when he was having some of his best success. He was always a low-key guy and I was following my life path. We closed Jefferson Downs in the fall of 1992 and by then Vickie and I were fully involved in Fair Grounds. My days didn't allow me to get to the jocks' room very often, and for whatever reason Larry and I didn't connect again until after the 1993 Fair Grounds fire and reopening of the new building in 1997.

When the new Fair Grounds building opened, I did make almost daily passes throughout the building, checking on what needed to be addressed with the new building. This brought me back into contact with Larry. He would sit in the silks room to start his race day and read the Bible. The other jocks bought him a rocking chair since he had become a senior member of the colony. He would gently rock, read and visit with whoever drifted into the room. Class guy through and through.

Vickie and I had some young homebreds in 1997. One strapping colt was named Coach Rags named after an old friend, an iconic baseball coach in New Orleans. He was a big horse and was a bit slow to develop. He broke his maiden in the spring of 1996. Rags was still pretty green when we entered in the Gentilly H., but he was well meant and was the favorite. We had high expectations. To say the least, we were a bit disappointed when Rags was a clearly beaten second to a horse named Kazliv. After regrouping, and processing what had just happened, I had to smile.

The betting public threw Kazliv out in their consideration because his form didn't quite fit the competition and his trainer, Winona Champagne, had never won a stakes race. Winona had recently recovered from cancer, and the win in the Gentilly was a tremendous lift for her. The only prouder member of the winner's circle picture was the jockey, her son, Larry Melancon. When Larry recounted his fondest memories in racing at the time of his retirement as a rider, he spoke of the mounts on Rapid Gray, Weekend Surprise and Guided Tour, but the win he was proudest of was Kazliv in the Gentilly H. for his mom. Rags went on to be a multiple stakes winner for us over several years.

In March 2002, we had a nice homebred filly named You'llbeinmyheart. She had won her first three races and looked to be special. The last spot for her to run at Fair Grounds before the close of the race meeting was the Gentilly H. against the boys. We lost our rider to another commitment and needed a replacement. As fate would have it, Larry was available and we were happy to have him. She broke on the lead and Larry throttled her down to make an honest pace for the mile on the turf challenge. When the pack came to her at the head of the lane, he released his cross and turned the whip. She drew off again to win by two lengths. This was a sweet win. You'llbeinmyheart's win complimented what turned out to be Coach Rags's last stakes win in the Dixie Poker Ace S. earlier in March under Shane Sellers's handling.

By 2006, Vickie and I were winding down our horse operation. Our filly Blueyed Lass was foaled out of Coach Rags's half-sister and by Rags's sire, Sky Classic. She was a late bloomer, just like Rags. She had been stakes-placed but had no stakes wins leading up to the Louisiana Champions Day Ladies S. of 2006. Once again, we were happy to secure the services of Larry to ride what would be our last stakes win as owners before we disbanded our stable that year.

I would see Larry in the years after, crossing paths with him with Al Stall, Jr. as an assistant or with Pat Day in his role with Pat's ministry. He had suffered a stroke in 2017, but fought through the effects to continue to maintain a presence in racing.

All but one of these races over the span of years at Fair Grounds were in the month of March. So to me, it was not without irony, in the month of March in early spring which had provided so many pleasant memories, Larry passed away. Perhaps the last win in December foretold more than we knew.

Everyone in racing will really miss the “good” Larry Melancon.

Bryan Krantz is the former owner of Jefferson Downs and Fair Grounds Race Course in New Orleans, and a lifelong Thoroughbred owner and breeder. He is currently a real estate developer and investor in southern Louisiana, and is a perpetual racetrack storyteller.