The Funny Farm Comes to Fasig-Tipton 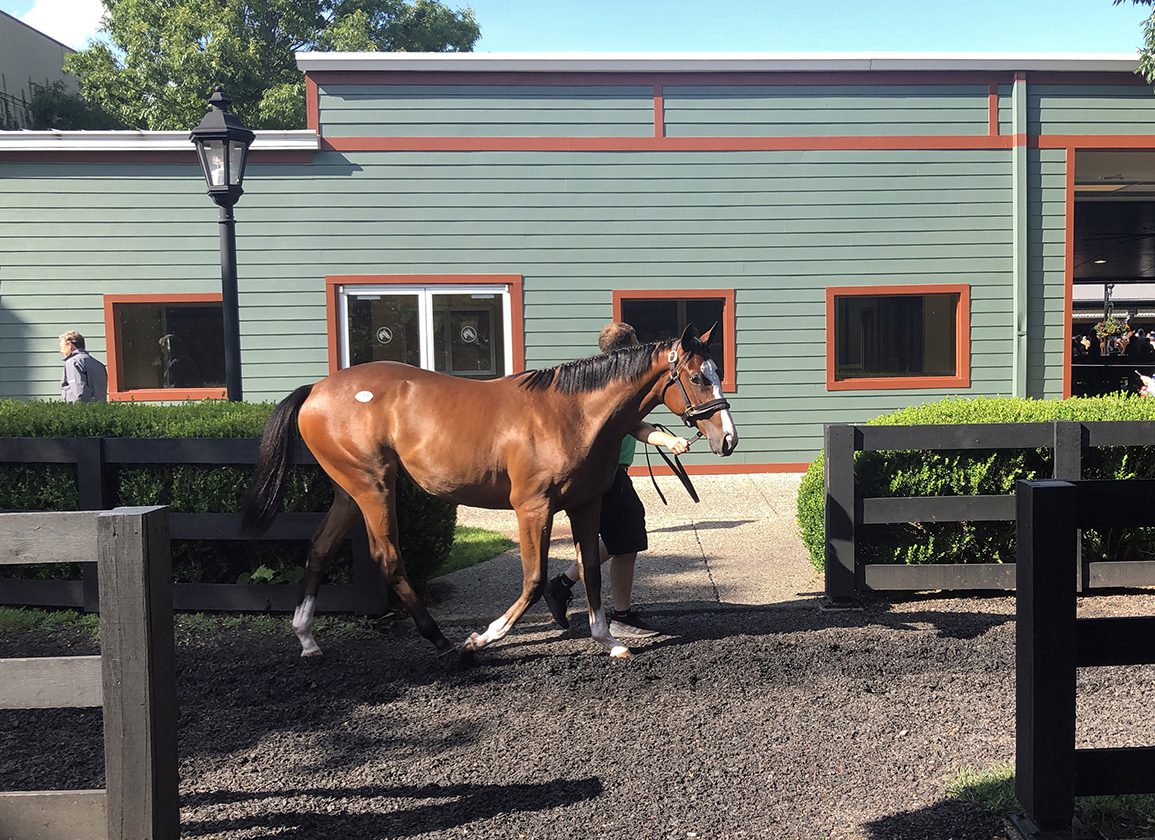 With over three decades of experience in the horse world, breeder Meg Dumaine will record a first when she brings her own consignment to the Fasig-Tipton July Sale of Selected Yearlings. Dumaine will offer three homebred yearlings under her The Funny Farm banner during the one-day auction.

“I have done all phases of this industry and I have run consignments for other people, but I've never sold my own horses,” Dumaine said. “It's just sort of coming full circle, from planning the mating, being there for the breeding, foaling the foal and raising it and prepping it. It's the last step in the cycle if you're not going to go any further and race them.”

Dumaine, who grew up just outside Boston, loved horses right from the start.

“My mother says my first words were, 'I want a horse,” Dumaine recalled. “That's the story I grew up being told. And I fought desperately to have a horse, against lots of parental opposition. As soon as I was old enough to buy one and support it myself, I did. I did U.S. Pony Club until I aged out of that and I am still active with the local Pony Clubs here working with younger kids. I just always wanted to do something with horses.”

Dumaine left New England for warmer climes in the late 1970s and has been living in the Bluegrass of Kentucky ever since.

“I didn't want to stay in New England where the winters were so long and the riding season was so short,” she said. “Especially for somebody who loves to ride outdoors. I moved here in 1979 when I attended UK. I never left.

“But I never finished UK, either,” she added with a chuckle.

Dumaine began breeding horses over 30 years ago, but determined to take a break from the pursuit until she could do it right.

“I was breeding years ago while I was galloping and breaking horses for a living and foaling mares,” Dumaine said. “They were cheap junk. And when I quit doing cheap junk, I swore I would never do it again until I could afford to do something that, at least on paper, looked like it might be worth something.

“I came into a little money when my parents died and stock certificates were really boring, so I decided to play with a little bit of it.”

She made her first move at the 2017 Keeneland November sale, where she acquired the dams of all three of her July offerings. She purchased the unraced Picardia (Stormy Atlantic), a half-sister to Grade I winners Lear's Princess (Lear Fan) and Pretty City Dancer (Tapit), for $350,000; stakes winner and multiple graded-placed You Bought Her (Graeme Hall) for $250,000; and stakes-placed Conquest Superstep (Super Saver), a full-sister to graded winner Inside Straight and half to graded winner Dance Daily (Five Star Day), for $150,000.

“I decided if I was going to do it, it had to be a team effort made up of people a lot smarter than me,” Dumaine said of that trip to Keeneland five years ago. “I reached out to an old friend, Dan Rosenberg, and he helped me with a long list coming down to a short list as we walked around at Keeneland. And these are the ones that the hammer fell on.”

Dumaine currently has a broodmare band of five Thoroughbreds at her The Funny Farm in Bourbon County and while she sees the most potential for making money within Kentucky's Thoroughbred industry, she is by no means breed exclusive.

“I love the birth process with the mare,” she continued. “I love being there for the foaling. I love getting my hands on foals. And going through those phases of 'I'm scared, I'm scared. You're a predator' and then building that confidence with them. The shaping of that young mind, that process. That's not specific to the Thoroughbred, but in this part of the country, it's the thing to do. It is where there is an industry and the potential for making some money.”

The Funny Farm's July consignment kicks off with a filly by Munnings out of Picardia (hip 154) and continues with a colt by Street Sense out of You Bought Her (hip 228). The trio is rounded out by a filly by Ghostzapper out of Conquest Superstep (hip 280).

“I am confident in them,” Dumaine said of the group. “I don't think anybody knows which one is going to be a racehorse until they get head to head with another horse and you see if they are going to dig in and go. But I know these horses are sound. I know they are clean and their X-rays are good and their scopes are good. They've never had horrible mishaps and they have been handled well. They are straightforward horses with good, athletic walks. They are the kind of horses I would want to buy if I was going to buy a racehorse prospect.”

As for her first attempt at consigning her own horses, Dumaine said, “I know I can do it on a small scale in the right venue. I don't feel like I could take my horses to Keeneland in September and sell them myself and be successful. I feel like, unless you  have that one horse who is the superstar that everyone is talking about, it's too easy to get lost among 3,000 horses. The buyers have to take horses off their lists somehow and not knowing who the consignor is could be enough.”

The Fasig-Tipton July sale will be held at the company's Newtown Paddocks next Tuesday with bidding beginning at 10 a.m. Next Monday, Fasig-Tipton will host its July Selected Horses of All Ages Sale. Bidding for that auction begins at 3 p.m.