The Forgotten Legacy of Ann Elliott 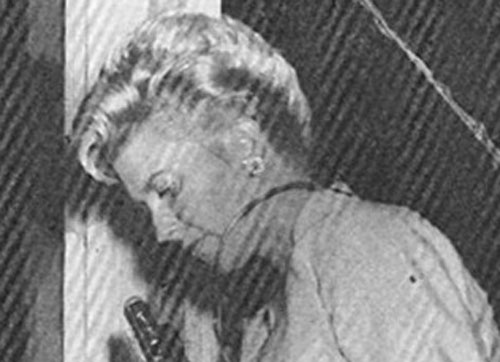 When Golden Gate Fields named Angela Hermann as the track’s new announcer earlier this week, her appointment was widely reported as being the first full-time hiring of a female Thoroughbred race caller in the history of United States.

In a highly competitive profession dominated by exclusively male voices, Hermann’s hiring is both significant and laudable. Her presence behind the microphone will likely open the announcer’s booth door a little wider for future female race callers to get opportunities at other tracks.

Golden Gate’s hiring of a woman to call horse races is not, however, a U.S. racing first. That distinction goes to Ann Elliott, who worked as the voice of Jefferson Downs outside New Orleans for four years in the early 1960s.

Two things are stunning about Elliott’s long-forgotten story: 1) That the industry has almost zero record or knowledge of her contributions to the sport; 2) The fact that being a race announcer was only a very small slice of this remarkable woman’s richly diverse life. Throughout her 82 years (she died in 2009), Elliott raised a family while working–among other gigs–as a pioneering television host, radio deejay, film actress, journalist, yacht sales broker, metaphysics teacher, minister, and non-profit builder of orphanages.

How is it that the important legacy of being America’s first female race announcer has been all but obliterated by the passage of time? Oddly enough, it was something as fleeting as social media that helped to rekindle the neglected history of Elliott’s time at Jefferson Downs.

On Monday, New York radio broadcaster Ron Flatter openly wondered on Twitter whether the just-announced Golden Gate hiring was indeed “The first?” As evidence that there might have been a precedent, he posted an archived video link to a 1962 “What’s My Line?” television broadcast.

This popular black-and-white show was a prime-time staple of the era, featuring celebrities trying to guess the offbeat occupations of various guests by peppering them with parlor-game type questions. On national TV, Elliott demurely stumped the celebs (the actor Tony Randall seemed particularly smitten with her), and the panel seemed good-naturedly incredulous that announcing horse races was what a woman might do for a living.

Shortly after Flatter’s post, Boston-based Jessica Chapel, who writes the www.railbird.org blog, shared on Twitter a 1962 Sports Illustrated roundup she had unearthed. It mentioned Elliott as someone who “startled the crowd and jockeys when she first tried the mike as the official race announcer at Jefferson Downs, but her calls were right and she was hired permanently, giving the track the only female voice in racing.”

TDN was intrigued, and after researching Elliott’s obituary (when she died her name was Ann Bodenhamer Martin), attempted to contact her surviving children. This endeavor was not successful, but the hunt turned up an online remembrance of Elliott that one of her sons, Richard, had posted in 2004 on a site dedicated to New Orleans radio history. It is this page that helps fill in some gaps.

In the 1950’s, Ken Elliott was a well-known Louisiana radio personality known as “Jack the Cat,” partnering with his wife, Ann, who took the name “Jacqueline the Kitten.” They thought up, produced and hosted all sorts of other broadcasting ideas on radio and TV, and around 1960 Ann was credited with coming up with a popular, lighthearted morning TV concept that mixed features, news and weather. “This morning show was the very first to use a format that is common today,” her son wrote.

At some point, Ken had been asked to announce the night horse races at Jefferson Park. But in 1962 he had to give up the gig to concentrate on his daytime broadcasting. The couple had a gift for publicity, so it’s not hard to see how they might have cooked up the idea for Ann to take over in his place—she was comfortable in front of a mike, already had a decent local following, and the small track could reap the benefits of the novelty of having a lady announcer. What could go wrong?

Well, for starters, Elliott got booed lustily the first time she called a race. Shortly thereafter, an inebriated owner barged into the booth and started rooting for his horse in the middle of a call. Elliott, trying to keep her composure, had to lean so far out the window that she almost fell to the grandstand. Eventually, the racetrackers and fans took a liking to her, and she to them.

“I’ve had a million laughs up here,” she said in an unsourced 1965 news clip that described her as a “vivacious blonde” who slips off high heels in favor of bedroom slippers when working in her pink-painted tower high above the finish line. It was part of her job to play soothing records over the public address system between races, but she said “one time I got so sick of waltzes and tangos I put on a rock-and-roll record. The fans didn’t like it. Yelled up to me to please take it off.”

It was a hallmark of 1960s journalism for women who did traditional men’s work to be depicted by the press as wanting (or needing) to retain their femininity. Elliott’s portrayal was no different.

“She dresses as a fashion model,” the article continued, “but instead of the traditional model’s hat box, she carries a flat suitcase containing high-powered binoculars.” When a reporter remarked about the hair spray, perfume, and hand lotion lined up next to the plastic board on which she wrote the names of the horses, Elliott quipped, “I’m prepared for any emergency.”

As of this writing, no known recordings of Elliott’s race calls exist. But the article noted she received early encouragement from Jack O’Hara, then the veteran announcer at the Fair Grounds, who told her “Don’t give it up.” When Richard Connell Sr., the president of Hazel Park, visited Jefferson Downs, he paid an awkward compliment to Elliott’s fluidity by saying, “Four races went by until I realized a woman was calling the horses.”

As the news clip pointed out, “A princess in an announcer’s booth doesn’t live happily ever after.” Yet exactly when Elliott stopped calling races is unclear.

A safe bet is that her announcing career was blown away by Mother Nature. Hurricane Betsey leveled Jefferson Downs in September 1965, and the track was not rebuilt until 1971 in a different location.

In the interim, Elliott moved on to other means of gainful employment. She appeared in the 1966 film “This Property Is Condemned” with Natalie Wood and Robert Redford when it was filmed in New Orleans, was featured in local and national ads for Pepsi and General Motors, and hosted the Miss New Orleans Pageant.

The Elliotts split up in 1967 and Ann returned to her native Arkansas to host TV talk shows. In 1969 she moved to Florida and took up a career as a print reporter, working at top papers in St. Petersburg, Ft. Lauderdale, and Miami. Reporting on the education beat led to involvement in The Association Montessori International and the United Nations Education Council.

In 1974, Elliott became a New Thought Minister. She moved to California two years later, authored a series of inspirational books, and was ordained by the Association of Unity Churches in 1989.

Elliott lived out her final years in Palm Springs, dedicated to her “little white church in the desert.” Even after being diagnosed with Parkinson’s disease “she fought it head on, openly talking about it, laughing at it, and loving God all the more.” She passed on Nov. 6, 2009.

It’s not the fault of any individual or entity that Elliott hasn’t been honored for being a pioneer of her profession. Based on the little that is known about her life, it’s difficult to think the “first lady of race calling” would feel slighted or be bitter that her legacy has been forgotten.

In fact, one of Elliott’s favorite pieces of wisdom, according to her obituary, might be imagined as advice she’d give to Hermann as the new Golden Gate fields announcer embarks upon her full-time race calling career: “Do what comes naturally and follow your heart.”