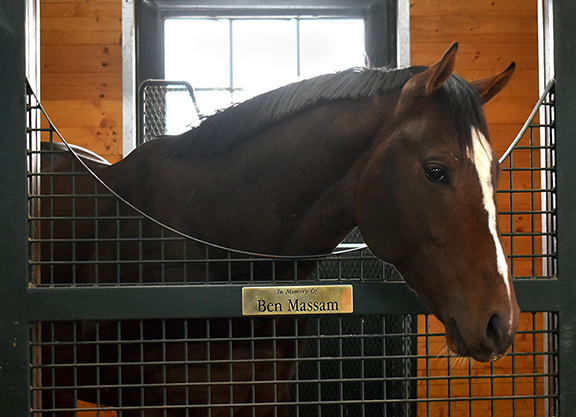 Pure Quill wasn’t much of a racehorse. Though he sold well as a weanling and again as a yearling, he made exactly two starts in his racing career, both in Indiana-bred maiden races. He was second-from-last, and last, and earned $495.

But to those of us at the TDN, he’s as meaningful as a Rising Star. That’s because the 2-year-old is the first horse in Ben’s Stall.

Pure Quill arrived at New Vocations’ Mereworth Farm in Lexington, Kentucky, on Nov. 9, three days after his last start. And on Dec. 12, he moved into Ben’s stall, so named for our News and Features Editor, Ben Massam, who passed away on Nov. 1 at the age of 31 after a battle with cancer. (Read his story here.)

“He’s been a good, easy horse to transition,” said Anna Ford, the New Vocations Thoroughbred Program Director. “He came from John Fort’s Peachtree Stables, who retires his horses at the appropriate time. He could have dropped him in price, or sold him cheaply. There were a lot of things he could have done which might have made more financial sense for him, but he called me on the last day he ran, and said, `I’m sending you a horse.’ For whatever reason, this horse wasn’t showing the potential of his pedigree. He can go on to be a lovely show horse because he doesn’t have any injuries. He’s young, and the sky is going to be the limit on what he can do. He’s sound and healthy and athletic, but for whatever reason, he didn’t want to go that fast. That’s exactly the kind of horse we love to get.”

People interested in adopting Pure Quill when he is ready, or browsing through the other adoptable horses, can look at New Vocations’ available horses page here.

The sponsor-a-stall program at New Vocations was part of the capital campaign to turn Susan Donaldson’s Mereworth Farm into a state-of-the-art adoption and retirement program.

“We feel really honored that the TDN would contact us and tell us Ben’s story,” said Ford. “It’s very moving for us. We have stalls with people’s names, and farm names, and four memorial ones. When you walk by them, it means so much to us. Our team members are the ones seeing the horses coming and going out of these stalls all the time, and they’re the ones that tug on our hearts the most. We feel very blessed that people want to honor someone’s memory by supporting our efforts by sponsoring a stall. It’s a win-win because there are a lot of people who walk through our barns from the industry and the first thing they do is look at these stalls.”

To learn more about Ben’s Stall, or make a donation, click here.