Home » Archive » Shared News » The Factors of His Success

The Factors of His Success 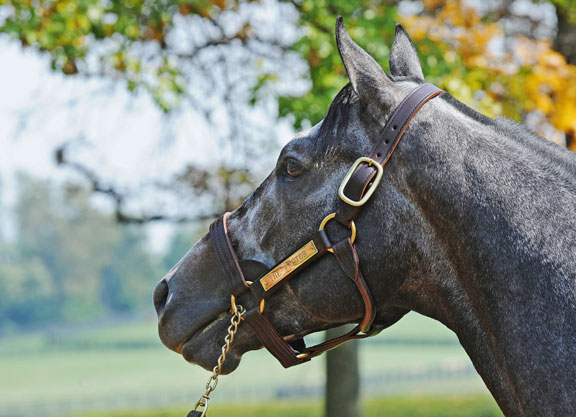 Reviewing the 2019 sires' championship, it was striking to observe such consistent correlation between fees and performance. Almost without exception, the top of the table was dominated by the most expensive stallions in the business. The big guns, in other words, had all found their range.

Those two distinctions are hardly unrelated, of course. But while The Factor arguably still has work to do even against the competition on his own farm—the Lane's End roster combining as much class and youth, right now, as any other—then he certainly remains priced to consolidate his place in the wider market, too. His fee for 2020, as such, has been raised only from $15,000 to $17,500.

“The Factor is one of the most underappreciated stallions in Kentucky,” declares Bill Farish of Lane's End. “He had 13 stakes winners last year, more than lots of very popular stallions. He really had a tremendous year and I think it's a great time to breed to him because his best two crops are 2-year-olds and 3-year-olds of 2020–both very solid books at the highest fee he's stood for so far.”

The farm's temperate approach to his fee, after such a stellar year, partly reflects the unusual journey taken by The Factor to this point. For it was only last spring that he resumed his Kentucky career, after a year's sojourn in Japan.

In his absence, The Factor's first three crops had sustained their collective momentum better than several others who had landed running after setting up shop in 2013. Bodemeister and Maclean's Music both produced a Classic winner from their respective first crops in Always Dreaming and Cloud Computing; Tapizar soon came up with Monomoy Girl; the precocious types who made Dialed In champion rookie were complemented by the sustained earning power of Gunnevera; while Union Rags, The Factor's buddy at Lane's End, promptly pulled no fewer than four Grade I scorers out of his hat.

The Factor himself also registered an instant hit at the elite level, through Chandelier S. winner Noted And Quoted. But while some of his rivals proved unable to consolidate—Bodemeister, for one, having recently been exiled to Turkey—The Factor was sieving gold nuggets so consistently that his third crop quietly elevated him to the top of the intake.

And last year, with a fourth crop in play, he bestrode the table by nearly every index: prizemoney, winners, wins, graded stakes horses and, above all, black-type success. In this category, in fact, he made the top 10 of the general sires' list by both winners and performers.

In theory, his stint in Hokkaido might have helped The Factor ride out the bumps in the road endured by virtually all young stallions as their first runners approach the track. But the fact is that he has never really missed a beat. Certainly it is a rare accolade for any stallion to receive a price hike, straight after testing the water with his first yearlings into the sales ring. Seventy of his debut crop together achieved an average of $143,499, pretty remarkable for a $15,000 launch, and he was promptly raised to $25,000.

Under sensibly restrained management, so characteristic of his farm, he had opened with a book of 135; and covered 151 mares in each of the next two seasons. After his fee rise, however, his books majored in quality over quantity at 127 and 105. Pending the maturity of the resulting foals, his owners (majority stakeholder George Bolton, with partners Stonestreet and Fog City) took the chance to keep the door revolving—he also has three shuttle crops in Australia—by admitting 166 Japanese mares.

Significantly, in terms of meanwhile consolidating his reputation, The Factor's early stock has shown a useful propensity to keep thriving with time. One graduate of his first crop, Cistron, last year achieved his Grade I breakthrough, in the Bing Crosby S., at the age of five. Another, Bound For Nowhere, meanwhile held his form sufficiently to earn Royal Ascot starts at three, four and five. Soundness, then, is certainly one of The Factor's developing trademarks.

“It really is,” enthuses Farish. “He does get tremendously sound horses. I think that was a bit of a surprise to the market, that they would be older horses. Not only does he get sound horses, but he gets a high percentage of good racehorses: from week to week, if you look at how many starters he has in stakes and allowance races combined, it's a very high number. He gets a lot of runners, and they train on–which is a tremendous attribute of his.”

So, too, is versatility–much as you would expect of a stallion who won Grade Is on both dirt and synthetics. Though Cistron found his metier in one-turn dashes over dirt, he was graded stakes-placed on grass earlier in his career; while The Factor's coffers in 2019 were next boosted by Bandua, who won the GIII Arlington H. over a mile and three-sixteenths on turf (also third in the GI Arlington Million). In fact, only five active American stallions ended the year higher in the turf earnings table.

“The Factor never ran on turf,” notes Farish. “He was all dirt. And he's getting horses that do both, which is a tremendous advantage nowadays. They seem to perform on any surface and they're not purely sprinters. He won the Rebel at a mile and a sixteenth, a very important Derby prep, and his progeny have done the same: won at a mile, mile and a sixteenth, on dirt and turf. Cistron happens to be a Grade I-winning sprinter. But Noted And Quoted and others have stretched out. So he's very versatile, and certainly not just a sprinter stallion.”

The Factor is from the first crop of one colossus, War Front, who was himself from one of the last of another, in Danzig. And the flexibility he is now showing himself, as an influence, echoes those genetic assets that have since elevated War Front to the highest fee in the land.

War Front's reputation as a turf sire, after all, is largely a function of opportunity, John Magnier and his team at Coolmore having identified his Danzig speed as the ideal foil for their Epsom-oriented stallions. As it was, his sire's profile in Europe allowed War Of Will to be pinhooked through a 2-year-old sale in France, before being restored to his native land to remind us how his sire can fight on all fronts.

Albeit Danzig has an even later heir than War Front, in Hard Spun, by modern standards The Factor certainly compresses the Northern Dancer sire-line. And he also offers equal genetic proximity to a broodmare sire legend, in his damsire Miswaki. His dam, moreover, is actually a winning half-sister to GI Breeders' Cup Juvenile runner-up Chief Seattle (Seattle Slew).

“His pedigree is one of the things that attracted us to him the most,” Farish says. “Being a son of War Front, the Northern Dancer line, with Mr. Prospector on the bottom, you just can't get a better cross than that, historically speaking. I mean he's just bred in the pink, as they say. And we were very involved with bringing Miswaki over, many years ago: a son of Mr Prospector that's dirt and turf. And so, again, we're seeing that with The Factor: he's one of the top sons of War Front and deserves to be recognized as that.”

The buzz around The Factor's first yearlings doubtless reflected his own sprinting prowess, of obvious appeal to breeze-up pinhookers and the like. But perhaps some of them were thrust too brusquely into the juvenile treadmill. He is turning out to be better than that; to have more and classier dimensions. As such, as people were gradually figuring out the full extent of what he can do, for a while he found himself rather a victim of his early sales success.

“There's no question that's the case,” assents Farish. “There was so much anticipation of him being a real 2-year-old sire and a tremendous number of his first-crop yearlings were taken to the 2-year-old sales. So it's interesting in his book so far this year to see a tremendous number of savvy Florida breeders breeding to him. Not just for the 2-year-old sales, but because they know they're durable and they'll stand training.”

On top of that, of course, his profile was presumably diluted by exile, temporary as it was. True, he did sell a $250,000 yearling last year, but had been obliged to settle for 80 mares on his return. Nor will he have any American yearlings to sell this autumn. But the upshot is that a stallion punching consistently above weight remains available at an eminently accessible fee.

“It can really hurt a stallion when they miss a year like that,” Farish accepts. “But with him, it's carried over. He had a very solid book last year and interest so far this year has been very high. We won't breed him to more than 120 mares, which I think is a huge advantage for commercial breeders. Because there's going to be other stallions in his price range and performance range that are, you know, bred to 200-plus mares. And that just won't be the case with him.

“He's tremendously consistent with the number of stakes winners he gets. For him to be priced where he is, that's a little bit a result of being gone for a year in Japan. And I think it gives breeders a real chance to get into him now at a very reasonable fee.”