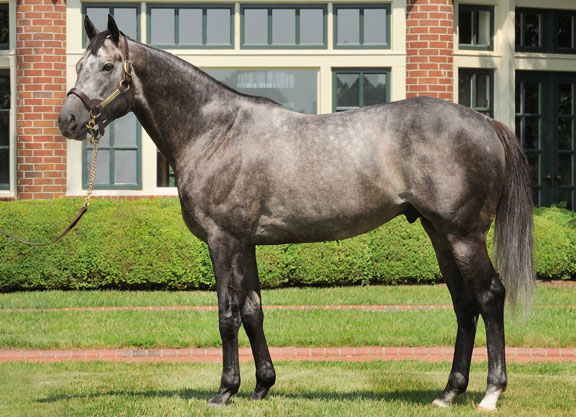 FACT FINDING (c, 2, The Factor–Sweet Belle {SW & GSP, $307,649}, by Deputy Commander) was let go at 6-1 despite his trainer’s propensity for firsters in his six-furlong Saratoga debut Aug. 6 and kicked home a decisive 2 1/4-length victor. Sent off as the even-money favorite this time around, the juvenile raced in a three-wide fourth early off sharp early fractions of :22.45 and :45.83. Popped the question by Hall of Famer John Velazquez at the top of stretch, the gray sailed clear in the lane and hit the line a dominant 4 1/2-length winner over 46-1 shot Chargin Storm (Nobiz Like Shobiz). It was the second straight win on the card for Velazquez and trainer Todd Pletcher, who also won the fourth race with the 2-year-old filly Chastise (Blame). Tally-Ho Stud purchased Fact Finding for $100,000 at the 2015 Keeneland September sale and sold him to Coolmore and Stonestreet for 350,000gns at this year’s Tattersalls Breeze-Up sale (breeze). The winner’s dam produced a yearling filly by Orb, who brought $80,000 at Keeneland September, and did not produce a foal in 2016, but was bred back to Tonalist. Lifetime Record: 2-2-0-0, $87,000. Click for the Equibase.com chart or VIDEO, sponsored by Fasig-Tipton.