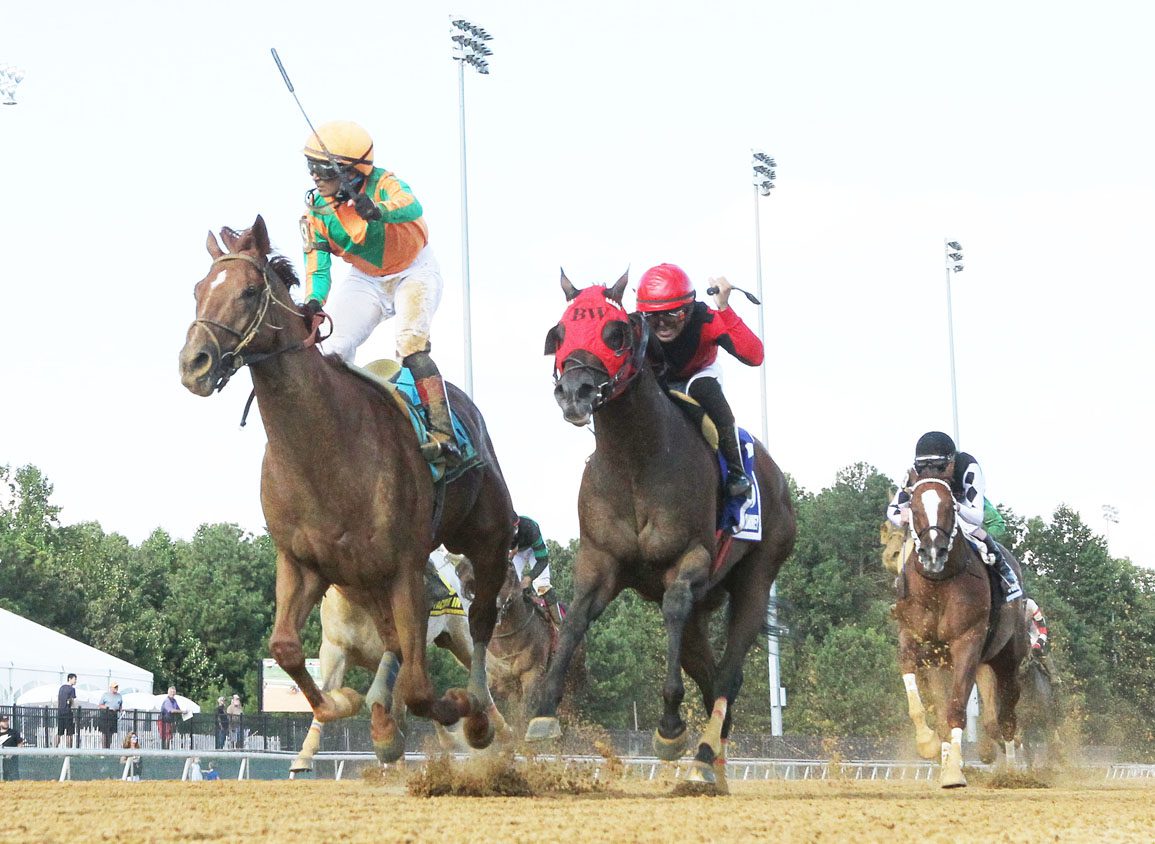 Necker Island crossing the line first in the Chesapeake | Coady

But after multiple objections and a stewards' inquiry, Necker Island was disqualified and demoted to third for interference in the stretch.

The lights had barely stopped blinking on the tote board when speculation sparked to life on social media about whether or not the 5-year-old's status as a track-record holder would be stripped, too.

The answer, according to Equibase, the industry's official record-keeper, is that Necker Island does not retain any record-holding distinction.

“The track record does not stand if the horse is DQ'd,” Rhonda Norby, Equibase's director of marketing and communications, emailed Wednesday morning in response to a TDN query.

“I know it has happened before but I would not be able to quantify it with any kind of certainty,” she wrote in a follow-up.

Although it's probably of little consolation to the horse's connections–owner The Scherr Boys and trainer Chris Hartman–Necker Island has managed to gain entry into an exclusive (but highly obscure) club of winners who got DQ'd after setting track records.

Yet here's where Necker Island is different: There are at least five other precedents in which winners got their numbers taken down for in-race interference over the past 75 years in North American racing. In each of those cases, their track records stayed up.

To be sure, the category of DQ'd record-holders has a hazy history that is not easy to trace. It's not the sort of esoteric stat that anyone in the sport even compiles. TDN researched newspaper archives to unearth the five known cases that were well-documented when they occurred. But there are likely other instances, either with the record being honored or stripped, that have been forgotten over time. Comments are welcomed from astute readers who might be able to add to this list.

The most recent occurrence appears to be Mar. 28, 2009, when Big Drama won the GII Swale S. at Gulfstream Park but was DQ'd to second for stretch interference. He established a 1:20.88 clocking for seven furlongs, and as of Wednesday morning, his Equibase chart still stated “New Track Record.”

When asked if Equibase considered this a precedent, Norby wrote, “That should not have been…thanks for bringing it to my attention.” She also noted that the record for that distance has since been twice broken, so at this point Big Drama's status is not up for debate (He does, however, still hold Gulfstream's record for six furlongs, which he established without being DQ'd in 2011).

The other known instances of DQ'd record-setters all occurred before Equibase took over as the industry's chief data-keeper in 1991.

Prior to that, it's unclear which entity, exactly, was responsible for conferring or vacating track-record status upon disqualified winners.

To this day, some states still have racing statutes on the books that deal with this infrequent happenstance. Virginia, though, where Colonial is located, isn't one of them.

Not all states make their racing laws available and/or searchable online. But even among those that do, there is variance about how DQ'd record-breakers should be treated.

Pennsylvania rules the other way: “If a horse establishes a track record in a race and is subsequently disqualified, the track record shall be void.”

West Virginia, Delaware and Massachusetts all leave it up to the stewards' judgment with similarly worded rules that state, “In determining the extent of disqualification, the stewards in their discretion may declare null and void a track record set or equaled by a disqualified horse, or any horses included with it in an entry due to common ties of ownership or training.”

New York doesn't directly address track records pertaining to on-track interference DQs. But the state does have an anti-doping rule that explains, “In the event that a horse establishes a track or other record in a race and it shall be determined by competent authority that the chemical analysis of any specimen taken from such horse shows the presence of a drug that is of such a character as could affect the racing condition of the horse in such race, then such record shall be null and void.”

Colonial's main track was playing fast Tuesday. Prior to Necker Island's quick clocking in the eighth race, a $25,000 claiming filly named Chakra (Munnings) established a 1:16.12 record for 6 1/2 furlongs in the opener.

That scenario is peculiarly similar to what happened May 15, 1973, at Belmont Park, when two horses set track records in sprints–and one of them was also DQ'd.

In that day's fifth race, Wanda, the 2-5 favorite, ran 6 1/2 furlongs in 1:15 3/5, shaving a fifth of a second (the standard prior to clocking in hundredths) off Belmont's existing mark.

But, as the New York Times reported, “What the stewards had seen, correctly, was a devastating 'block' thrown by Wanda against the second finisher, Tuerta, about 70 yards from the wire. Had this been the Super Bowl, Wanda would have earned a raise. Instead, she was disqualified and placed second,” [while retaining her status as setting one of] two track marks.”

Almost exactly 20 years earlier, on May 16, 1953, eight-length winner Squared Away got DQ'd and placed last at Pimlico Race Course for interference in the first sixteenth of the 5 1/2-furlong $15,000 Baltimore Spring H. after having stopped the timer in a record 1:04 4/5.

Squared Away's career stats are emblematic of a gritty gelding from a bygone era. He was an eight-time stakes winner who would eventually amass 31 wins from 103 starts. But his other claim to fame had to do with his pedigree: He was a 1947 foal out the dam out Imperatrice. His five years younger half-sister was Somethingroyal, who never raced. But she ended up producing the iconic Secretariat.

And in another strange, but true aspect of this 1953 DQ, the horse who got put up as the winner because of the foul was Senator Joe–who one year earlier had established Pimlico's previous track record for that distance by winning the very same stakes while surviving a foul claim against him. So for two years in a row, Senator Joe was the beneficiary of the stewards' actions, both times winning the same stakes but eventually losing his record-setting status.

“The stewards deliberated for some 20 minutes, and during that time [Squared Away's owner] Mrs. [Jan] Burke was in the winner's circle awaiting the presentation of the trophy,” the New York Times reported. “She appeared stunned when the disqualification was announced.”

If there is any horse who can lay claim to kingpin status among the DQ'd record-setters, it has to be Capot. Most folks know him as the colt who ran second in the GI Kentucky Derby, then won the GI Preakness and GI Belmont S. en route to 3-year-old champ and Horse of the Year honors in 1949.

But the truly bizarre aspect of Capot's career is that he set three track records overall (the Preakness was one of them), yet was twice DQ'd from those record-setting victories.

As a 2-year-old in October 1948, Capot set Pimlico's track record for 1 1/16 miles in 1:42 3/5, but was DQ'd for fouling a rival. News reports in the aftermath of the race indicated that his record would stand.

On July 2, 1949, after his Triple Crown campaign, Capot was the more powerful half of a Greentree Stable mutuel coupling with Wine List that got hammered to 1-10 odds in the nine-furlong, four-horse, $20,000 Leonard Richards S. at Delaware Park.

Wine List went to the front, but veered sharply off the rail at the head of the lane.

“It was apparent that Wine List went wide to permit Capot a chance to edge through for his vaunted dash to the wire,” the New York Times reported, indicating that the 1:48 2/5 clocking stood while the entrymates got demoted. “The disqualification was the second against Capot after setting a track record.”