The Equine Artistry of Harold Roth 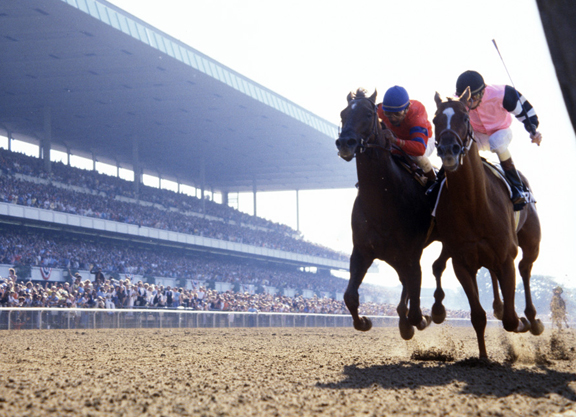 Affirmed defeats Alydar in the 1978 Belmont

If the old cliche about a picture being worth a thousand words is true, you'd better brace yourself for billions of words worth of well-told tales before delving into Harold Roth's horse racing image library.

A 1973 racetrack photojournalism assignment for his Queens College student newspaper led to Roth's eventual founding of Horsephotos, the world's preeminent equine photo library. More than four decades later, Roth and his long-time team of 20 or so photographers have compiled more than four million digital images of Thoroughbreds, major races, sales, backstretch personnel, and other multi-discipline horse-related events, activities, and situations.

“Our depth and breadth is that we have so many images from over such a long time,” the Los Angeles-based Roth said in a recent phone interview. “I could never have envisioned this when I first started. I think we have a very nice history of accomplishment.”

After developing a taste for racing with that first photo shoot in the Secretariat era, Roth freelanced for Turf and Sport Digest while pursuing work as a commercial photographer. One of his early ad agency assignments involved shooting the GI Marlboro Cup at Belmont Park, which dovetailed into his getting hired by the New York Racing Association to shoot everything from billboards to program covers through the early 1980s. Along the way, Roth separately helped create images for 30 children's books, including Harold Roth's Big Book of Horses.

In the mid-1980s, Roth got the idea to create Equine Images, the horse industry's first stock photo agency. In 1995, Roth rebranded the company as Horsephotos, but the most fundamental-and commercially successful-breakthrough came three years later, when the advent of the Internet enabled Horsephotos to create a searchable online library (no easy task, as Roth noted, in the days when the primary way of accessing cumbersome high-resolution files involved connecting to the Internet via phone modem).

Customer demand has boomed since then and so has Roth's network of photographers, who on a typical weekend will shoot live from tracks and sales in New York, California, Kentucky, Florida, Europe and Japan. Horsephotos' clients include international media outlets (including TDN), the National Thoroughbred Racing Association, TVG, and numerous ad agencies. In addition, Horsephotos is routinely called upon for special assignments, like providing still shots for the films Seabiscuit and Dreamer.

Roth has had to adapt to various game-changing technological trends. But unlike some old-school photographers, you won't hear him pining for the long-gone days of film and darkrooms.

“Film is not the 'ultimate' sort of thing like people talk about music on vinyl,” Roth said. “I don't even think it's a parallel, because I think film, when you digitize it, does not translate as well. Current digital media is so good-so refined, so many colors. I think it's a lot clearer, a lot more vibrant, and I can attest to that by the shot of Zenyatta (Street Cry {Ire}) and Blame (Arch) [included in the accompanying retrospective].

Roth's most reproduced shot ever is Affirmed and Alydar battling to the wire in the 1978 Belmont S.

“The reason that one was the most popular is that for decades, mainstream media worldwide used it to illustrate the last time America had a Triple Crown winner. When American Pharoah (Pioneerof the Nile) won, it sort of took a little bit of that away,” Roth explained with a laugh.

Although the running of the Horsephotos business cuts into the time Roth gets to spend trackside, he still shoots North America's major events and race meets. One thing that hasn't changed is his penchant for passing along skills and aesthetics to a new generation of photographers.

“One of the things that I teach the younger photographers on the team is that you can take a picture of a sunset, but that's not really photography in my opinion,” Roth said. “The interaction between you, your subject, and your mind are more important. So photography becomes making pictures happen as much as taking them. If you can involve yourself by being in the right place to make that moment really happen for the viewer, you are doing them a greater service than just getting a shot.”

TDN asked Roth to choose eight images from his library that have special meaning for him, and to explain why each strikes him as artistically resonant.

“That was a muddy day. I was sort of keen on Forego at the time, being the come-from-behind horse that he was. I shot that with a single-frame Minolta camera. It wasn't even a motor-drive camera. No auto-focus. So the fact that I got one in-focus frame of that horse, with all four legs off of the ground, coming into the finish beating Honest Pleasure by the slightest of margins, that was fortuitous or lucky–I'm not sure which.”

Affirmed outduels Alydar in the 1978 G1 Belmont S. to win the Triple Crown

“That was with a remote camera. We laid the camera on the track itself, and I had my wife at the time pushing the button on that. We set it up and we pre-focused it on a spot and waited for the horses to come into the frame.”

“The feature of turf is the green background. So I situated myself on the third floor of the Belmont grandstand. I shot it at a very slow shutter speed, so you can see that the legs have some movement in there, and the background of the green stands out as much as it can. You're not just focusing on the horses. I didn't expect it to be that close, and I didn't expect it to be wire to wire. But I think it accomplished what I wanted to see, which is that the turf told the story–John Henry being the turf specialist that he was.”

“Shaq with the jockeys might be the most bizarre shot I've ever taken in terms of out-of-context recognition. When I evaluate [the setup of a shot] I try to think of what's the greatest impact you can get from a 'normal' situation. I was told in advance he was doing a commercial for Vitaminwater. The [advertising] team was not friendly, because they didn't want to blow the whistle on what was going on. I saw Shaq when he was dressed in street clothes, then he goes into the jocks' room. I was prohibited from going down there, so I just staked out the tunnel. That's pretty normal-the jockeys coming out of the Belmont Park tunnel. Then all of a sudden, out came Shaq in silks, looking huge, to the surprise of everybody. It transcended horse racing.”

“Kiaran has multiple sclerosis, and his condition doesn't really allow him to saddle horses directly. I was hired to do a cover shoot on him for North American Trainer, and I wanted to get something special, including a horse in the picture. This is on the Belmont training track, and I parked myself in the parking lot, which is below the track on the inside. I just waited, and was on the phone with Kiaran telling him what I'm doing. It was a lot of coordination, might have taken a half hour, until we got him really framed underneath a horse. That's why I like that shot–it's not something that happens easily, and you can't create it intentionally.”

“I've done the last 20-something Eclipse Awards. As you can imagine, usually the owners just stand there and pose in front of the banner, and you almost have to beg them to show any emotion. This time they were out of control. This might have been the most vibrant group I've ever shot there. They got really excited and just cheered on and on. Some of the frames that I had were so unmanageable-they were just jumping on each other. I actually had to calm them down a little bit so I could get a better photo.”

“Churchill Downs had just created night racing, so we didn't have the ability to know what the lighting was going to be like there in advance. I just cranked up my ISO [a light sensitivity value] as high as I could and hoped for the best. I shot that at 5,500 ISO, and the normal that we might use on an everyday basis might be 800. And it came out great. I don't think film would have ever done that. The thing that I like the most about that shot is there's lighting coming from underneath their legs. You can see the dirt flying, so you don't need to create any illusion of speed. I could have cropped it a little tighter, but I left the horses in the back just so you could see that Zenyatta and Blame were the only two horses really participating in the finish of the race.”

“My goal has always been to try and make a picture that tells the story. Many have photos of Pharoah crossing the finish line, but I think this was as much a people story, and it reflects the sentiment of the day. Because we had so many photographers shooting from the ground on the inside and the outside, I chose to be far removed from the hordes of professional media photographers. So I got permission to sit in Steve Duncker's NYRA box, and from there I photographed with a wider-angle lens, just to hopefully gather some of the ambiance in addition to the race. I think the concept played well. You're getting an idea about how crazy the fans were, even though some of them are looking at the video board in the infield. This is the loudest I've ever heard a grandstand. It was overwhelming. You want a story that includes the insanity of the moment. Horses winning are okay, but being in a place where other [photographers] are not takes the game from the visual to the conceptual.”

To see the full collection of images, please view the Monday, Sept. 12 edition of the TDN.