The Creek is Rising: From Humble Beginnings to Stallion Makers 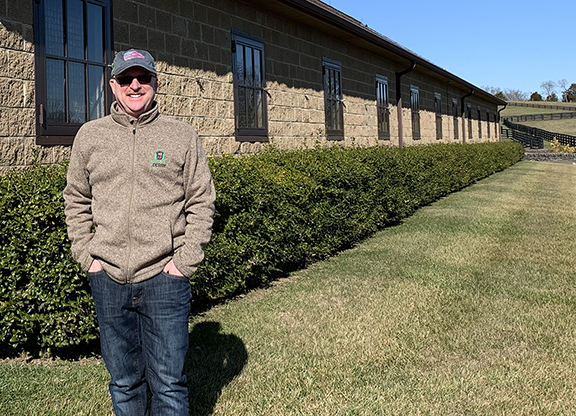 You've heard the name: Twin Creeks. But what you might not know is the racing stable and farm has been involved in some monumental deals in the past decade. Add in their current involvement in one of the hottest freshman sires on the planet and one of his Derby-bound sons, and you're likely to hear a whole lot more about Steve Davison and Randy Gullatt's Twin Creeks in the future.

Originally established in 1992, Twin Creeks Farm was founded by the two old school friends from Louisiana. Davison and Gullatt spent nearly a decade racing in their home state and then in Northern California prior to their notable success both on the track and in the sales ring.

While Davison earned a law degree, Gullatt went straight to the track from high school: galloping horses, grooming, hotwalking, learning. He decided to try his hand at training and asked his friend's dad if he might help with some modest funding.

That first bankroll enabled the friends to claim a horse down in Louisiana. It won a couple of races, got claimed from them, and they reinvested. The next one won a few better races. There were ups and downs, but they managed to keep going.

“I didn't know where my expectations were then,” says Gullatt. “I was just a competitive person, so I just wanted to be successful and win.”

They grew their small barn, then Gullatt moved his family west. They came up with La Paz (Hold Your Peace), an Arizona-bred who won a couple of minor stakes. Gullatt's children were growing up though and the two friends came up with a plan to build a farm in Kentucky, to focus on breeding horses instead of racing them in order to provide a more stable life for Gullatt's family.

“Coming from Louisiana we really hadn't been exposed to the top level of business. Only when we started becoming bigger and more successful did we realize what could be accomplished, and that took years.”

La Paz came good as a broodmare, throwing Forest Camp (Deputy Minister) who won the GII Del Mar Futurity in 1999. Striking while the iron was hot, the friends sold her for $1.6 million at the next year's Keeneland November breeding stock sale.

Fast forward eight years from that sale, and the two friends found they weren't finished with La Paz yet. In 2008 she had an Unbridled's Song colt entered in the Keeneland September sale. Gullatt and Davison had recently decided they wanted to race again. Gullatt loved the colt, whom they bought for $200,000 and named Mission Impazible.

Trained by Todd Pletcher, Mission Impazible won first time out at Keeneland the following spring. He ended up taking the GII Louisiana Derby and became the first of three GI Kentucky Derby runners they have been involved with thus far. He also became the first stallion prospect they made.

The friends then found Graydar, another Unbridled's Song, in 2011 for $260,000 as a Fasig-Tipton 2-year-old. Also trained by Pletcher, he came into his own as a 4-year-old, winning the GI Donn H., the GII New Orleans H., and the GII Kelso H. Now they had a second stallion prospect.

Destin (Giant's Causeway), a $400,000 Keeneland September purchase in 2014, was another who took them to the Kentucky Derby and did one better to miss by just a nose in the GI Belmont S. Twin Creeks was staking more for their yearlings as Davison's business interests prospered, but they only buy a handful each year so the results were still impressive.

“We have had our share of disappointments,” said Gullatt. They lost a horse called Montauk (Medaglia d'Oro), whom Gullatt thought may have been the best of them all. Bought with partners for $850,000 at OBS April in 2017, he only raced once, winning by 11 1/4 lengths that autumn at Belmont, then he broke his shoulder one morning in training and was gone.

“He was a very special talent,” said Gullatt. “I don't think I'll ever get over him.”

They had other setbacks, including late scratches when fancied from the Kentucky Derby and the G1 Dubai World Cup, as well as from Breeders' Cup races. There are always more tough days than good in horse racing, but Gullatt said he has always had a competitive streak which keeps driving him on, pushing him forward.

“I think one of the biggest lessons I have learned from training and raising horses is when to be patient and when to be aggressive.”

Twin Creeks bought into Catholic Boy (More Than Ready), who went on to victory in the GI Runhappy Travers S. It marked another share in another stallion for the 20-odd mares they had now accumulated back at Twin Creeks.

But perhaps Gullatt and Davison's biggest score has been with a son of Tapit, bought at the Fasig-Tipton Saratoga sale in 2012 for $400,000 in partnership with WinStar Farm. Gullatt had known WinStar's CEO Elliott Walden for years. The colt they named Constitution had caught both their eyes.

Before Constitution even ran, Gullatt was so taken with the colt he went out and found his dam, Baffled (Distorted Humor), and purchased her privately. In 2016, Baffled was resold for $3.5 million at Fasig-Tipton's Kentucky November sale.

“Constitution was showing elite talent,” said Gullatt. “We thought it was a huge opportunity, and luckily we were right.”

Constitution went on to win the GI Florida Derby and the GI Donn H. Another good racehorse, another stallion for the friends. Standing initially for $15,000 at WinStar, he became a standout freshman sire of 2019 and saw his fee upped to $40,000 for this year. Tiz the Law, a Grade I winner from that first crop, was bred and then sold by Twin Creeks. And then there's Constitution's Independence Hall, the undefeated GIII Nashua S. winner who added the Jerome S. at Aqueduct on New Year's Day–Twin Creeks bought into him too. They are on the Derby trail again, with one of the ante-post favorites, a trail Gullatt says is a conscious target for them now.

Around the farm the paddocks are neatly fenced, an equine swimming pool has been built, woods were cleared for the barn, and a home was built up on the hill. Gullatt's wife, Kim, a former jockey, has taken in some of their retired racehorses for retraining and showing.

This past fall she won a Liberty class with Mission Impazible's first winner, Silver Mission, and is preparing another Twin Creeks retiree for the 2020 Thoroughbred Makeover.

“It comes from that respect for the racehorse, getting to raise them,” said Gullatt. “You form an attachment, you feel you owe it to them. We had the facility and the capability, and we really enjoy doing it. My wife is the leader in that department.”

Gullatt said trust is the principle reason for his sustained success with Davison.