Home » Archive » Shared News » The Comeback Filly: How Bold and Bossy Made it Back to the Starting Gate

The Comeback Filly: How Bold and Bossy Made it Back to the Starting Gate 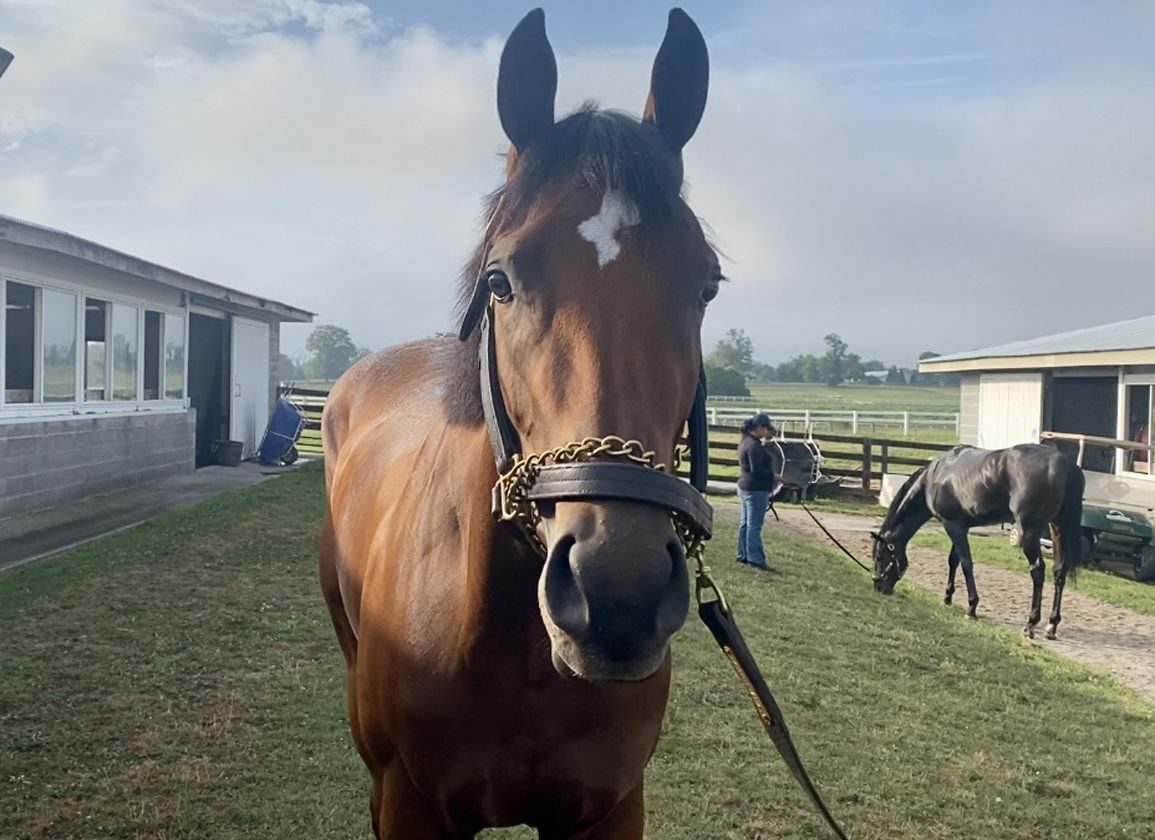 Many will recall the peculiar story of Bold and Bossy (Strong Mandate), the unlucky filly who got loose before her juvenile debut at Ellis Park last summer and was caught over 30 minutes later after making it to the interstate and crossing state lines only to be involved in a barn fire the very next morning. Now, her trainer Michael Ann Ewing hopes that soon, people will remember Bold and Bossy for something more.

Almost a year after that ill-fated weekend in Henderson, Kentucky, Bold and Bossy is not only back to optimal health, but she just recently made her first start in a $17,000 maiden special weight at Belterra Park. The filly grew leg weary and settled for third, but for Ewing and those who had a hand in nurturing her back to health, the race was unquestionably a major victory.

“It's sort of like being a parent and you have a child that has a great difficulty or a sickness or injury,” Ewing explained. “You nurse them and you don't know what the outcome is going to be and then when it's really positive, there's a very big sense of, I guess, pride. There was a lot of commitment there, a lot of time and a lot of energy. I'm just happy to see her healthy and happy.”

A $15,000 Fasig-Tipton October graduate, Bold and Bossy was one of three yearlings purchased by Ewing in the hopes of having success in lucrative summer 2-year-old races. As the trio went through the breaking process at The Thoroughbred Center, Bold and Bossy was by far the most difficult trainee.

“She was quirky,” Ewing recalled. “Even after six weeks as they were starting to gallop in the field, she would still throw in some bucks. The other two would be walking through the gate, but she would want to just run through.”

Despite her headstrong character, the filly proved to be the most forward of the three and was the first to make it to the races in August. Ewing entered her at Ellis Park, but the filly got spooked alongside the pony in the post parade. She lost balance and fell on her side, unseating jockey Miguel Mena, and was soon off and running.

“I was back in Lexington thinking how we got her all the way down there and now we were going to have to start back at zero,” Ewing recalled. “My assistant Kelsey called me and told me she was gone. I said, 'What do you mean, she's gone?' and Kelsey told me that she had disappeared.”

Escaping the outriders, Bold and Bossy sped down U.S. 41 N, Interstate 69 and Veterans Memorial Parkway. She crossed state lines into Indiana before she finally started to tire and was caught by a policeman and trainer Jack Hancock. She returned to Ellis in the horse ambulance and immediately received fluids.

Ewing opted to keep the filly at Ellis overnight so that she could rehydrate and relax before shipping home in the cool of the morning instead of loading her in a trailer for a three-hour haul home in the heat of the afternoon that day. It was a good idea in theory, but early that next morning, the receiving barn caught on fire.

“She was actually rescued by one of our groom's brothers,” Ewing noted. “I think there were five horses in the receiving barn and she was the last one out. She had been burned and we were worried about smoke inhalation.” 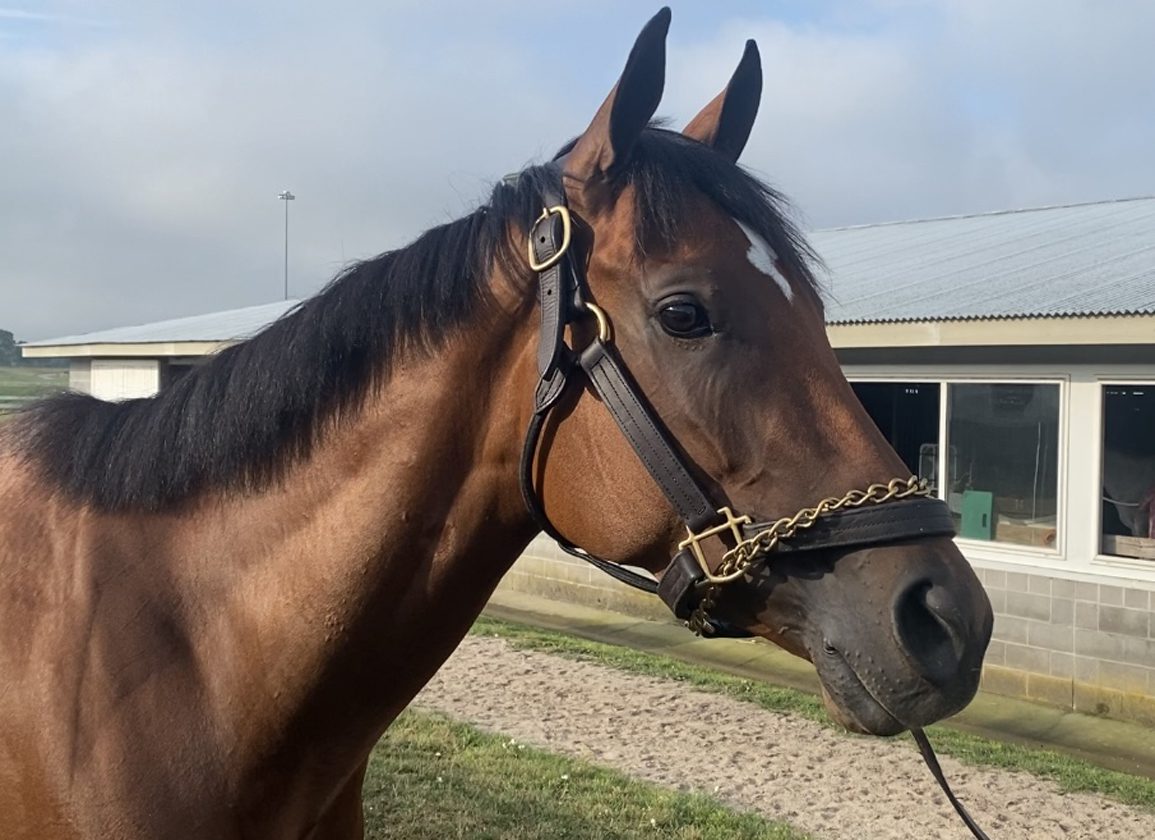 Bold and Bossy was back in Lexington at Rood and Riddle Equine Hospital by 9 a.m. that morning and spent three days in an air conditioned stall there. While the filly had no lung damage, the burns on her topline eventually led to her losing the hair and skin from her withers to her hindquarters. She had also lost two shoes when she got loose and had incurred severe hoof damage from running on the hot pavement of the highway.

When Bold and Bossy made it home to The Thoroughbred Center, additional fans were put in the stall to keep flies off her injuries. She was hand-walked daily until November and then went to the farm of Ewing's veterinarian Dr. Joe Morgan where she enjoyed daily turnout and continued to heal.

Early this year, Bold and Bossy again returned to The Thoroughbred Center. Her feet were healthy and while she did have scarring along her topline, the burns were completely healed. Ewing wasn't sure if the 3-year-old would be interested in returning to training, but she figured it was worth a shot.

“Since we're a racing barn and I bought her to race, I thought we would just see,” Ewing explained. “We put a saddle on her and we put a couple of extra pads on to protect her. Our number one concern was if the scarring would bother her, but it didn't. She went back into training and never had a day that she didn't want to go to the track or that she went off her feed. She was very forward and happy.”

As a member of the board of directors for the Secretariat Center, Ewing was quick to add that if the filly had not been interested in racing or had been in any way uncomfortable, she would have found a second career.

For now, Ewing said that they are pointing Bold and Bossy toward a second start at Belterra Park in the coming weeks. She admitted that the filly would probably never drop to the claiming ranks.

“It is a business, but there's so much time and energy and maybe fondness with her that I'm not sure I'd want to put her in for a tag. There's an extra aspect of making sure she has a really good outcome.”

Looking back on all that has happened with the appropriately named filly since she first arrived at Ewing's barn as a yearling, the trainer said she is proud of all that her team has accomplished in getting Bold and Bossy back to the starting gate.

“[When the fire happened], I couldn't believe it,” she said. “I thought that this filly was such a bad-luck horse. But now, I think maybe she's a good-luck horse because she survived. When I look at her now, which is almost a year to when this happened, she's healthy and she has matured and it's really unbelievable. I think she will still improve. She might be a next-time winner. I'm always confident. If you're not confident, you wouldn't be a trainer.”