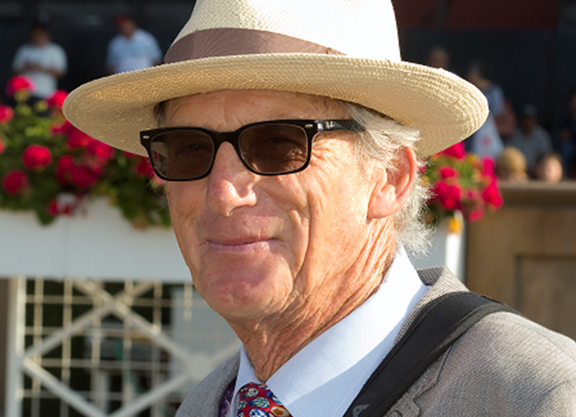 In a new TDN series, we curry lessons and wise counsel from veteran Californian figures who, like gold nuggets panned from the Tuolomne River in the High Sierras, have unearthed career riches on arguably the toughest circuit in the States. We begin this series with John Shirreffs.

Born at Fort Leavenworth, Kansas, Shirreffs was raised around horses on his family farm, and was deployed to Vietnam with the Marine Corps before embarking on a career in racing, using a 10-year stint at the Loma Rica Horse Ranch in Northern California as a springboard to a training career that would see him sift one of the rarest jewels of all.

Amid the tall spiking pines and jutting mountain cathedrals of Northern California's Grass Valley back when the sprawling Loma Rica Horse Ranch still hummed with activity and where the transatlantic phenom Noor would later be interred–to haunt the barns, some say–one stubborn son-of-a-gun yearling colt gave a young John Shirreffs an abject lesson in obstinance.

“He's in the stall rearing up and striking and I can't get the bridle on him,” said Shirreffs, remembering the scene from the safe hindsight of some five decades. The memory remains sharp, however.

After a fashion, though, Shirreffs waved the white flag and with ego deflated turned to Henry Freitas, the farm's storied manager, for pointers on a less adversarial approach.
“Henry said, 'John, just stop all the B.S. Just go down the stall and put the bridle on the horse and quit all that crap you're doing.'”

Shirreffs was unimpressed. “I'm walking down the shedrow thinking to myself, 'what kind of help was that?'” Still, the relationship between pupil and master was one of deference to experience–decades worth, in the case of Freitas–and so, Shirreffs dutifully obliged.

“I went in the stall, put the bridle on the horse–the horse never moved. It was over.”

And what was the main takeaway? “The value of a timeout with horses,” he replied. “When you're caught up in the moment and things aren't working out, the best thing to do is just stop and give yourself and the horse a chance to have a moment of thought to recover.” 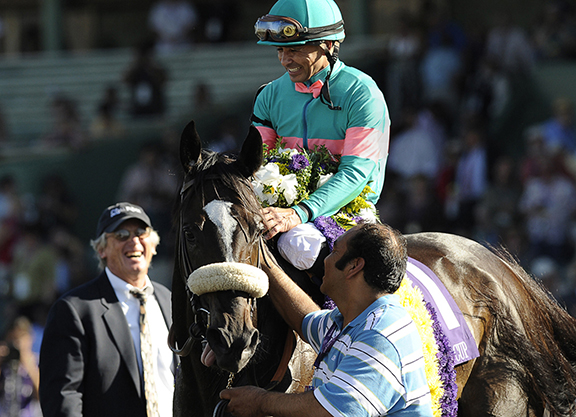 Shirreffs after the Breeders' Cup Distaff with Zenyatta | Sarah Andrew

Shirreffs imparted the story one recent morning in his office at Santa Anita, the nearby San Gabriel Mountains draped in a cold, grey drizzle like a soggy blanket, as the veteran trainer reflected on a 45-year career looped into which is a Kentucky Derby win and multiple Breeders' Cups and the sort of horse in Zenyatta (Street Cry {Ire}) that comes along about as often as Halley's Comet.

This nugget of barn-spun wisdom also provides a useful barometer of the trainer's evolution as a horseman, familiar sounding to anyone long enough in the tooth to know that any career with racehorses is akin to a college course without end.

“When I was younger, I could dominate a horse, right? I could handle them pretty well through strength. But as I got older, horses started getting a lot stronger than I was. Most of them were starting to outsmart me. So, I learned over the years what a mental game it is.”

Indeed, from a world in which the economics of high-level competition has sprouted large military-run outfits–those where routine and repetition are bywords for necessity and thrift–the Shirreffs barn offers a refreshing alternative, where morning training is approached with the same certitude of an explorer setting foot on virgin terrain.

But while Cook and Columbus had in the North Star their guiding light, Shirreffs has for his something altogether more fluid and transactional.

“It's always about building the bond,” said Shirreffs, focusing in on what appears a central conceit of his.

“You have to build a bond between the horse and the person. I have to find a way where that horse has trust in whoever's handling him or doing something with them. So, it's always about the bond, because if that horse trusts the groom or trusts the person with them, then they will behave much better than if all they're thinking about is being nervous, being anxious about what's coming next.”

Wander down any shedrow and you'll hear horse behavior equated with everything from wayward teens to recalcitrant spouses to loving sweethearts. This isn't new–the instinct to anthropomorphize is as ancient as civilization itself.

What's unusual is to hear any trainer–especially those operating within the upper echelons of a sport where a business degree can sometimes feel like the most instructive qualification–talk of the complex emotional bandwidth of a racehorse, as Shirreffs does.

The foundations of this clearly stem from those early days under Freitas at Loma Rica Ranch, a 600-acre university for horsemanship, home as it was to stallion and mare, yearling and breaker, lay-up and foal.

“I think somebody should spend an hour in the stall with a stud, just to understand the range of emotion that an animal can have,” he said. “Sometimes, the thing that amazes me about horses is how much they are willing to communicate and how much they're studying us. 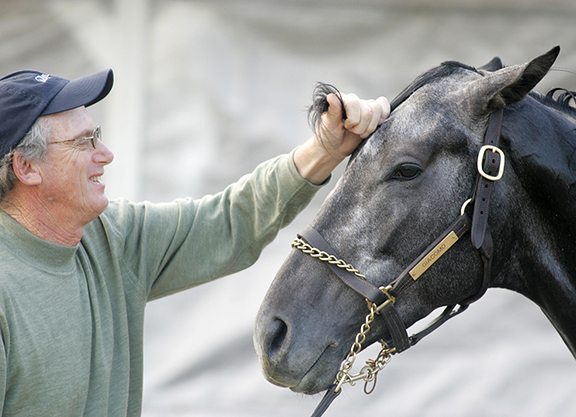 It's a matter of getting to know your horse: Shirreffs with Giacomo | Horsephotos

He added, “You have to realize that they are trying to make their environment as good as they can. And we are the biggest thing in their environment that they have to control. Right?” he added. “We're the ones that could endanger them. So, obviously they're studying what type of a relationship they're going to have with us.”

Like all relationships, the means define the ends. Of course, when it comes to understanding quirks and foibles, there are few substitutes for patience. “It's a matter of getting to know your horse,” he said.

“It's fun to watch the horses to pick up on their habits–I have the time to do that, when the work gets done and everyone's gone to lunch, I have that opportunity, when it's quiet, to watch the horses and see how they're behaving, see what's different about one or the other.”

This, he says, is particularly instructive to the early diagnosis of injury–arguably the biggest culprit of sleepless nights among insomniac license-holders.

“Horses are very stoic, right? You don't have an obvious sense of what's bothering them in the beginning [of injury], before there's any heat or any inflammation or anything like that,” he explained. “But how he eats is a good indication of how he's feeling, not only emotionally but also physically.

“Even then, by the time you notice that something's going on, he's probably been dealing with pain for probably quite some time.”

Such close scrutiny of behavior feeds into what he terms the “bio-rhythm” of a horse–the idea that a racehorse can be brought to peak performance only when, like a maestro vigilant of each section of the orchestra, they're mentally, physically and emotionally in balance.

He continued, “So, you're going to have to lose a little bit of conditioning maybe to bring them up mentally and emotionally, right? It's always: How close you can get everything?

“That's the one great thing about campaigning a horse, because when they're campaigning they're conditioning–they're physically staying at a pretty high level. And as they campaign, and as they get used to the rigors of racing and training, mentally they're getting stronger, too. And then, if there's some sort of pleasure involved–some sort of reward for the horse–then they're emotionally getting better.

“So, it's all a question of balancing these three different things.”

The real pleasure a trainer gets

In those early days at Loma Rica Horse Ranch, Freitas came down with a nasty bout of flu, giving Shirreffs an early glimpse into the peculiar juggling act that operating a barn necessitates. Though perhaps baptism of fire would be more apropos.

“I knew the routine, right? I knew how everything ran. So, I was fine for about two or three days because I knew exactly what Henry would do.

“But suddenly, after about three or four days, I had to make new decisions based on ones I made a couple of days ago. That's when I got into trouble because I didn't have Henry to ask.”

Now, many an analogy befits a well-run stable, all shaped around a certain triangular hierarchy–an ant colony, for example, of an aforementioned branch of the military.

It's instructive then to hear Shirreffs explain the roles he's carved out for him and staff.

“I don't really need to know veterinary medicine, right? I don't need to know the name of drugs, all that kind of stuff,” he said. “[Veterinarians], they go to school, they know that. But I can learn what the shoer does, right? I can watch what they do.

“I can feel legs, and the difference between one leg and another and study those things. I can watch the horse and see if he's acting colicky or a little upset because of something else going on. So, I thought in the beginning that was where I would best spend my time to become a better trainer.”

Part of that process of self-evaluation has involved holding a mirror to his own failings–his own Achilles heels-as typified, for example, in the way he has, at times, placed individuals in charge of identifying soft tissue injuries.

“As a trainer, you go in and you're checking behind the saddle, but I'm always thinking it doesn't feel too bad because I want to train that horse, right? I have to have somebody put the brakes on. I have to have my own sort of checks and balances.”

At the same time, “You can't put demands on people, right? Because I think a certain way, and I react a certain way, I can't demand that other person be like me and react the way I would react.

“Let's take the exercise rider or jockey or whatever, you have to understand where they are [ability wise], what are their strong points and how you can best use them to accomplish what you need to accomplish with the horse.”

In an industry that often calibrates professional achievement and pleasure through the narrow aperture of race-day honors, it's refreshing, then, to hear someone no stranger to laurel wreath and garland talk of their other important metrics of success.

“It's so difficult to win a race–in California, especially. So somewhere along the way, if you're going to be in this business, you have to derive some pleasure from somewhere else, right?
“So, the real pleasure a trainer gets is seeing the growth in the horse. Or having somebody, like a rider, start to develop and understand his relationship with the horse, see what impact that person can make on how that horse is going to handle the stresses of racing.

“It's really a pleasure when you suddenly see a guy realize that if he didn't pull on this horse so hard and just kind of released the reins a little bit, the horse starts to relax. He realizes, 'Oh, it's not all muscle, it's a little bit of a finesse.'

“I think those are really fun things.”

Part II of this story will run in next week's TDN.