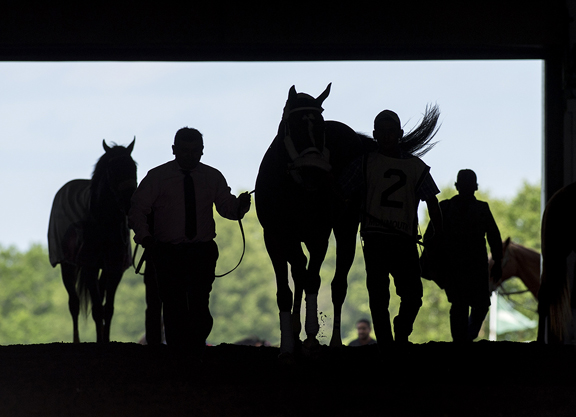 (This is the second in a series we are doing on environmental contamination. Click here for part one.)

Like a Matryoshka doll of conjecture and supposition, the very real threat of environmental contamination in the horse racing industry's testing protocols can play out like a game that becomes ever more intricate with each layer unpeeled.

In part one of this series, we looked at a growing understanding of the array of possible contaminants in the backstretch environment coupled with ever more sensitive testing methodologies.

But go deeper, and what emerges are questions surrounding things like metabolism rates and pathways of exposure, chemical stability and analytical sensitivity, burdens of proof and innocence.

So, what do some industry experts posit as possible solutions to the kinks bedeviling the current testing infrastructure?

For some, the first port of call belongs in the medication rule books–more specifically, the arcana of testing thresholds.

These thresholds are permissible amounts of a legal therapeutic medication in a given sample–designed to be an indication, regulators say, that it was administered at the proper time and at the proper dose, and that the horse was not racing under the influence of a performance-enhancing dose of something.

The Association of Racing Commissioners International (ARCI)'s “Endogenous, Dietary, or Environmental Substances Schedule” is a list of 10 substances with their associated testing thresholds. Caffeine has a threshold of 100 ng/ml in blood, for example. For morphine, it's 30 ng/ml in urine. The Racing Medication & Testing Consortium (RMTC)'s “Controlled Therapeutic Substances Schedule” is a list of another 28 regulated medications with associated thresholds.

Nevertheless, there are all sorts of other substances of both horse and human use found frequently in the backstretch environment for which there are no such thresholds.

Because of this omission, Steve Barker, former director of the Louisiana State University Equine Medication Surveillance Laboratory, says he believes the industry needs to convene a team of experts, including pharmacologists, to establish a more sweeping and comprehensive set of testing thresholds.

This list would take into account the ubiquity of substances across the nation's backstretches, as well as to determine levels below which they have no pharmacological effect–in other words, amounts that don't enhance the performance of a horse.

“This need not be so damaging to the integrity to racing, but it is damaging,” Barker says, adding that in some cases where thresholds are already in place, they may need to be raised to take into account the additional threat of environmental contamination.

Some experts, however, urge caution.

“It is not an unreasonable suggestion on the face of it,” says RMTC executive director and chief operating officer Mary Scollay, regarding an across-the-board look at thresholds.

But Scollay warns that the industry needs to be careful not to adopt more permissive rules that result in the sport's integrity being even further eroded.

Indeed, there are various reasons why the RMTC hasn't already established testing thresholds for medications, permitted and otherwise, including how the use of a particular drug in close proximity to a race may be deemed ethically objectionable.

“You've got to think about the other people in the race,” says Scollay. “Can they legitimately feel like their horse had a fair shot and was not at a chemical disadvantage?”

A broader snag appears to concern the term “performance enhancing”–a phrase tossed around like a tennis ball, but one that can have a kaleidoscopic set of interpretations and permutations.

“When you have a horse that wins by half a nose, and if that horse ends up having some sort of a drug in its system, how can you say with certainty that there was no performance-effecting thing going on?” says a director of a U.S. laboratory, who asked to remain anonymous due to their company's involvement in ongoing litigation.

“No one size fits all”

University of Kentucky professor Scott Stanley agrees that the nailing down of thresholds can be a complicated task. He pointed to scopolamine–a substance that can appear in jimson weed, a potential feed contaminant made infamous by Justify's positive test following his 2018 GI Santa Anita Derby win.

According to Stanley, not only can scopolamine appear at different levels in the jimson weed's stem, leaf or seed, but these levels can also be altered by the conditions in which the plant grew, like a bad drought season.

“So now I'm supposed to establish a threshold for potential exposure that may shift and change on the fly, depending on the season and the environment, and whether the horse was exposed to this over several days or a single time,” Stanley says.

“Not one size fits all,” he says, adding that the determination of legitimate instances of environmental contamination is a similar scientific minefield. “We don't necessarily know how, when and why the contamination happens. And it's rarely the same every time.”

The problem, says Stanley, is racing's current “hardline regulations, which are appropriate 99% of the time,” he says. “We need to have more modernized rules that can address situations like this.”

Over the past few years, many regulators have modified their rules to better take into account the threat of environmental contamination. In recent years, the Kentucky Horse Racing Commission (KHRC) altered its absolute-insurer rule to allow trainers with a medication positive to provide rebuttal during hearings, for example.

But as it currently stands, a positive finding almost always triggers a formal regulatory process that critics argue too often ends in unnecessary penalties when environmental contamination is to blame. On top of that are the not-inconsiderable costs that aggrieved connections can amass if they choose to legally defend their reputations.

Which is why Stanley suggests that a non-prosecutorial “initial review” first take place before any regulatory action occurs, if indeed environmental contamination appears a genuine possibility.

An initial review–conducted by an independent panel of experts with no skin in the outcome–would afford regulators a needed window with which to investigate cases that defy simple explanation and without the regulatory clock ticking.

Back in 2013, 48 California-based horses tested positive for Zilpaterol–then a Class 3 medication that is also used as a supplement for weight gain in livestock. The contamination was traced back to a batch of contaminated sweet feeds.

Zilpaterol is the “perfect example” of the need for such a review system, Stanley says. “We would never have considered Zilpaterol when it happened as a contamination exposure issue.”

A non-prosecutorial initial investigation would also afford regulators the opportunity to determine whether a positive is intentional or inadvertent, and thus give them avenues to embark upon formal regulatory proceedings or dismiss the case altogether without penalty if environmental contamination is proven.

If the preponderance of evidence supports that the positive finding did not affect the horse's performance, and that it was outside the trainer's control, “then the horse shouldn't be disqualified,” Stanley says.

“There's no room for error”

There are other ways to modernize the regulatory framework, especially when it comes to detection limits and screening limits for which there can be much variability between laboratories, say experts.

A detection limit is the lowest level at which a laboratory can detect with confidence a certain substance. That different laboratories often have different detection limits for substances is a problem primarily for those without established testing thresholds–in other words, the “non-threshold” substances.

In a nutshell, what this means is that one laboratory might be able to accurately detect a substance at a lower level than another, making the playing field less than fair for trainers across the country, say experts.

A similarly problematic paradigm exists when it comes to screening limits, typically higher than the detection limit, and what is in essence an established cut-off limit for detection.

Screening limits differ from testing thresholds in that they aren't permissible amounts of a regulated drug–rather, as Scollay puts it, they are levels that trigger further analysis.

And while the RMTC has recommended screening limits for certain substances–less than a dozen, says Scollay–in an effort to “harmonize” practices across different laboratories, “to a large extent, it's unknown” just how much variability in testing for non-threshold substances there is, she admits.

“They screen for so many substances,” says Scollay. “Until a certain substance gets on our radar screen and we have a discussion, we don't really know how the labs respond.”

On a more fundamental level, trainers, regulators and scientists emphasize the need for a wholesale revision of management practices across the nation's backstretches and testing areas. “Equine environments aren't pristine and never will be, but we must do something,” says Barker.

Some look to the trainers to make their barns as contaminant-free as possible, ensuring that all medications are handled cleanly and professionally, for example, and that staff don't urinate in the stalls. “If you can't housebreak the help, you probably shouldn't have a trainer's license,” says Scollay.

But many horsemen are in turn highly critical of the tracks themselves and argue that facilities across the nation don't take nearly enough rigorous care to ensure the ship-in stalls, the receiving barns, and the test areas are clean.

“I have on occasion complained to management because you ship into some stalls on race day and you'll find manure from the day before or bandages that haven't been thrown in the trash,” says trainer Graham Motion. “In many countries it wouldn't be acceptable.”

Indeed, in the United Kingdom, horses typically are stabled at the racetrack only for the day of the race. When they leave, the racetrack must clean the empty boxes to one of two levels of cleanliness, or else face a possible fine. A similar punitive set of standards in the U.S., says Motion and others, could help fix a glaring problem.