The Ageless One, Mike Smith Looking to Make Derby History 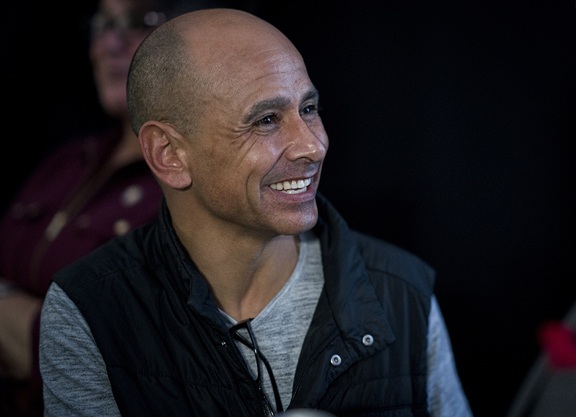 It was back in 1984 when a 19-year-old kid named Mike Smith rode in his first GI Kentucky Derby aboard sixth-place finisher Pine Circle. He was the youngest jockey in the race. The oldest was a legend, the then 52-year-old Bill Shoemaker.

Aboard Silent King, Shoemaker was riding in the Derby for the 23rd time. As for Smith, he was just happy to be there, not knowing when he would get another chance. He never thought that one day he would become the Shoemaker of his generation.

That's what Smith is. He is still very much in demand, particularly in the big races, and has become an iconic and respected figure who, into his mid-fifities, seems to be impervious to the ravages of time. Smith's accomplishments are very Shoemaker-esque, but on Saturday he will be out to do what Shoemaker could not, win the Kentucky Derby at the age of 56.

Shoemaker became the oldest rider in Derby history to win the race when he guided Ferdinand to victory in 1986 as a 54-year-old. A year later, he finished sixth aboard Gulch. In 1988, in his last-ever Derby mount, the 56-year-old Shoemaker was 12th aboard Lively One. He retired in 1990.

Thirty-four years have come and gone since Shoemaker set the record, a record that might be about to fall. Smith will ride Taiba (Gun Runner), the winner of the GI Runhappy Santa Anita Derby and a 12-1 shot in the morning line for the Derby.

“To even be mentioned in the same breath as Shoemaker is amazing,” Smith said. “All riders idolize him and if they don't they don't know anything about racing.  If we could pull this off it would be something really special.”

The 1984 running was the only time Smith and Shoemaker competed against one another in the Derby. Smith didn't get another Derby mount until 1990. But he remembers other times he squared off against Shoemaker in races and the talks they had after Shoemaker had become a trainer.

“I rode with Shoe a few times,” Smith said. “Then I got to know him afterwards, when he was training and before he passed away. It was probably two weeks before he passed [Shoemaker died in 2003] that I had a long conversation with him. We were sitting in the jocks' room and we were talking about Azeri. He said that she was really bred for the grass. He said, 'Imagine if they ever tried her on the grass?' That was the last conversation I ever had with him. I was blessed to get to know him a little bit. He was an amazing human being. I never could have imagined that I might someday break his record in the Derby. I was just happy to know the man.”

Smith last won the Derby in 2018 with Justify (Scat Daddy). He was 52 then, an age where most jockeys have either retired or are mulling the end to their career. But not Smith. He mainly limits his mounts to the major races and is a fanatic when it comes to working out and taking care of his body. The results speak for themselves–he is still one of the top jockeys in the sport.

“I feel great and I'm doing great,” Smith said. “I keep working at it. Every race I ride I still feel like I am learning. I still want to win every race. The fire hasn't dwindled any. I keep myself in great shape. If you take care of your body and you work at it, you can still be successful at my age. You see that in all sports. Look at what Tom Brady is doing. He keeps himself in great shape and he's playing like it's his third or fourth year in the NFL.”

Late last year, Smith appeared to have his Derby horse. He won the GI Breeders' Cup Juvenile aboard Corniche (Quality Road), who was later named 2-year-old male champion. But Corniche was slow to come around this year and his connections decided not to rush him in an attempt to make the Derby. Not only had Smith not secured a Derby mount, through the end of March, a losing mount in the GII San Felipe S. was his lone assignment on the year in a race in which Derby points were allotted. He hasn't missed a Derby since 2014.

Smith had worked Taiba when he was a 2-year-old, but when the colt made his career debut Mar. 5, John Velazquez was aboard. When it came to the Santa Anita Derby, Velazquez had to choose between Taiba and the more accomplished Messier (Empire Maker). He chose Messier, who wound up finishing second behind Taiba in the Santa Anita Derby.

“Yes, without a doubt, I was worried,” Smith said. “I didn't have anything up until the Santa Anita Derby when I was fortunate enough to pick up Taiba. But I felt that something big was going to come up. Not only do I get a mount in the Derby, but I got one with a colt who has so much talent.”

Taiba has a long way to go before he can be called the next Justify, a Triple Crown winner, but there are a lot of similarities between the two. Justify was trained by Bob Baffert and was lightly raced before running in the Derby, his fourth lifetime start. Taiba started out in the Baffert stable before being moved to trainer Tim Yakteen after Baffert started serving his 90-day suspension for the drug positive he received in last year's Derby with Medina Spirit (Protonico). The Derby will be just Taiba's third lifetime start. Both enter the Kentucky Derby off wins in the Santa Anita Derby.

“People always ask me, can you compare him to Justify?” Smith said. “He's one you can compare to Justify. Both are extremely talented and very intelligent. Though he's not as big as Justify, both are big chestnuts. They both have very high cruising speed. They remind me a lot of each other.”

Even Smith can't go on forever. When asked if he saw himself riding at age 60, he said that he did not. But he has no immediate plans to retire.

“I'm just waiting for it to tell me,” he said. “Should I stop now? Why would I? I feel like I'm still there, still helping. I don't feel like I am getting in the way, especially in these kind of races and with the younger horses. I still feel that I have a lot to offer. I'm going to do it until the day I wake up and God has told me it's time to call it a career. It's hard to say when that will happen. I know I feel good and am keeping myself in great shape. As long as I keep getting these opportunities I am going to do what I love. I'm having a lot of fun doing what I'm doing. I don't have the pressure of trying to be leading rider. Give me one or two really good horses and I am happy.”

Shoemaker won four Derbies. Taiba would be Smith's third. A win by Taiba could quite possibly be Smith's last in the Derby, meaning he would not equal Shoemaker's number. Then again, it's Mike Smith. What isn't possible?