The Adaptation of Peter Bradley 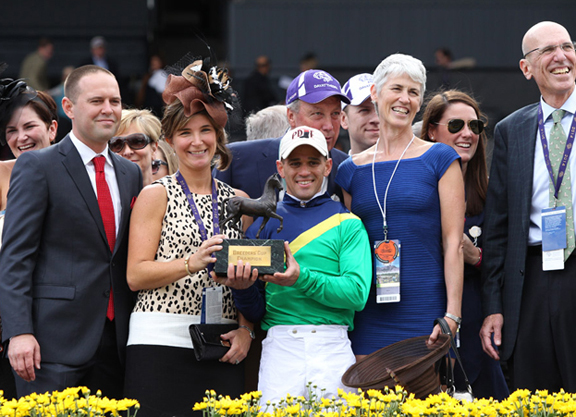 Using a variation on the “necessity is the mother of invention” proverb, Bradley Thoroughbreds emerged from the recession with a change in emphasis in its business that has yielded terrific results.

While Peter Bradley’s Lexington, Ky. bloodstock agency has had plenty of success since it was established in 1995, the results of its racing partnerships–now about 40% of his company–have been especially noteworthy this decade. The most recent example is Watsdachances (Ire) (Diamond Green {Fr}) who sold for $900,000 on Nov. 2 at the Fasig Tipton November Sale after earning $1.2 million on the racetrack. A year ago, champion-to-be Dayatthespa (City Zip) brought $2.1 million at the Fasig-Tipton November Sale, a couple of days after winning the Breeders’ Cup Filly and Mare Turf to complete a stellar career.

Both fillies ended up returning substantial returns on investment for the partnerships developed by the veteran horseman. Though the stars have moved into the next chapter of their lives as broodmares, leaving impressive statistics behind, Bradley Thoroughbreds and a variety of partners have a lineup of 19 runners, led by GII Ballston Spa winner Dacita (Chi), GIII Long Island Handicap winner Goldy Espony and GIII Monmouth Oaks winner Delightful Joy.

Bradley calls itself a full-service agency and it operates on a variety of platforms in the Thoroughbred industry. When the world-wide economic crisis pounded the racing and bloodstock business seven years ago, Bradley realized he needed to re-adjust his approach. He described it is “an evolution,” but in some respects Bradley was returning to an earlier time in his career. He started out walking hots and moving up the training ladder in California some 40 years ago then moved into the bloodstock side of the business in Kentucky in 1981.

He figured that after three or four years he would go back to the track.

“Yeah, it was desperate when the broodmare market, in particular, and the share market, which I did a lot of business in, had a significant downtown,” he said. “When things are going bad, do the things that you like the best. I had done some racing partnerships on other horses–like Brahms, Pyrus and Gino’s Spirit–and they were almost secondary to the rest of the business I was doing.

“So when the rest of the business turned down, I turned to what I had a passion for. When you really like something you do it better than everything else. I’m not saying I didn’t like everything else, but it’s easier to promote something you like. It was hard to say that you need another broodmare, at that time in the market.”

Bradley, 59, chuckled as he said the words, adding, “it’s not that people needed another racehorse, but at least you could say, ‘let’s try to have some fun.'”

His pitch was straightforward enough: “The model was to try and buy made horses in Europe that had a chance of competing in Saturday races over here.”

The bulk of those established but usually very young horses would be fillies, who Bradley knew had the best upside potential.

“I have nothing against colts, but if you win a Grade III with a filly, depending on the pedigree, you probably have a minimum residual value of $250,000,” he said. “On pedigree, it could be more than double that.

Unfortunately, with colts, if you win a Grade III, especially on the turf, it’s hard to find a home for them as a stallion prospect anywhere. Your return on your risk is much better with fillies than it is with colts.

“That being said, the lottery tickets are the colts and if you have one that can win the Kentucky Derby or a top Grade I on the dirt you have a $5 million to $25 million horse conceivably.”

Most of the horses in the Bradley partnerships are trained by Chad Brown, 36, who he has known since shortly after Brown graduated from Cornell and before he worked for the late Bobby Frankel. Dayatthespa came into the Brown barn as a 2-year-old in 2011, Desert Blanc, winner of the 2012 GI Manhattan, came along several months later, and Watsdachances arrived as 2-year-old in 2012 after starting her career in Ireland. Along the way, Bradley and his pinhooking partner, Eddie Woods, handled two horses that became well-known stakes horses for Brown and other owners, Lady Eli and Normandy Invasion.

Brown, who typically has about 15 of the Bradley horses, is on the verge of cracking $20 million in purses earnings for a season for the first time in his career. He is the leading turf trainer in the country again this year and is headed to another second-place finish in the overall trainers’ standings behind perennial leader Todd Pletcher.

“Pete has an exceptional eye for talent and has consistently acquired a diverse group of horses for me to work with,” Brown said.

Dayatthespa won her debut by four lengths at Saratoga Race Course on Aug. 4, 2011–her owners said that day the name had nothing to do with Saratoga’s nickname “the Spa” –and she went on to have great success at America’s oldest track. She was second in the GIII Natalma and ninth in the GII Breeders’ Cup Juvenile Fillies Turf. Three years later, the victory in the Filly and Mare Turf was her 11th in 18 career starts.

“She was in a racing partnership that I put together to try and take advantage of the upcoming changes in the New York-bred program,” Bradley said. “We bought, I believe, four horses. I was trying to buy only New York-breds and she was the only New York-bred that I could buy. While I thought I was ahead of the curve, I wasn’t really.

“Also, I’ve always tried to be conservative in the amounts I spend on horses. Spending $150,000 on a horse at that time I thought was a lot. I was trying to find New York-breds in the $50,000 to $100,000 range. She didn’t sell and we bought her at a price point right in then middle of those two numbers, along with three other horses that were very ordinary. But if one out of four turns out to be like her, I’ll be the smartest guy in the horse business.”

When Stonestreet Thoroughbred Holdings finished as the winning bidder for the 5-year-old mare, Dayatthespa had earned a total of $4.38 million for her owners.

“It doesn’t happen quite that way every time,” Bradley said. “It’s a numbers game and basically if you are good enough and lucky enough to make it a 20% game, where hopefully 20% of your horses can carry the rest of them, you’re doing pretty well in this business.”

Watsdachances turned out to be the star of the group of horses in her partnership and more than paid for the others. She finished in the top three in 14 of her 20 career starts and picked up a Grade I victory in August when she was the lucky benefactor of a disqualification in the Beverly D.

Success on the track and the sales ring has produced a demand for Bradley’s partnerships. He usually keeps the group to fewer than 10 investors, lets the horses run in the colors of the majority owner and his company retains a small percentage.

“Five years ago, I wouldn’t say we had to beg to fill the partnerships, but it was nip and tuck to get them full,” he said. “Now when I do find a horse, unfortunately I have to turn people away. It’s a nice predicament to be in.”

Last winter, Bradley completed his first purchase for a South American horse, purchasing the Chilean-bred Dacita. The principal investor are Sheep Pond Partners, who own unbeaten Lady Eli. They gave Dacita six months to acclimate to the Northern Hemisphere and turned her over to Brown. She won her U.S,. debut, running from well off the pace to beat Tepin, winner of the GI Breeders’ Cup Mile, in the Ballston Spa.

Bradley said he had looked to South America for many years for prospects, but could not find a suitable candidate that satisfied his criteria until he found Dacita.

“It was a combination of her consistency, her turn of foot, the way she quickened, and the times she was running in,” he said. “South America is harder to figure out. The very best of the South American horses, year in and year out, can be as good as any in the world. But there is also a smaller pool down there and a Grade I winner one year might be equal to a Grade III winner or a listed winner in Europe in that year and the next year it might be on equal par with those horses. It’s a little more difficult to figure out the overall quality of the form.”

Brown said that Dacita didn’t seemed to like the rain-softened course at Keeneland while finishing ninth in the Breeders’ Cup Filly and Mare Turf, but feels that Bradley has given him what will be a top Grade I-level runner in 2016.

“Pete casts a wide net on what he looks at globally,” Brown said. “And he’s innovative. He doesn’t just continue to go back to the same pond, if you will, or the same way of doing things. He’s always looking for a way to do things better or design a partnership maybe slightly different. If something in the industry has changed, he tries to make an adjustment toward maybe searching in a different area of the world for a horse or buying a horse at a different age because of changes in the market. He keeps his finger on the pulse of the industry and makes a lot of good adjustments along the way.”

While the partnership business is thriving, Bradley Thoroughbreds remains deeply involved in other facets of the business. Bradley operates a pinhooking venture that has recently handled the likes of Kentucky Derby runner-up Firing Line. His company moves broodmares, does matings and is one of the major players outside of the farms in Kentucky selling seasons. Thanks to a few bad years in the marketplace that brought about some changes, its partnership business is doing roughly three times what it was a decade ago. Bradley considers himself fortunate to have had that success.

“As I’m looking back over the last couple of years, it’s a lot of hard work to find the right kind of horses and then you have to get lucky on top of it,” he said. “The thing you remember is that it’s about the horses and stay humble. All you can do is work hard because a lot of times it doesn’t work out.

“The worst thing you can ever think is that you are smart in this business. Work hard and stay lucky. That’s what I like to do.”