That's A Wrap: Top 10 Quotes from the Pan Am/IFAR Conferences 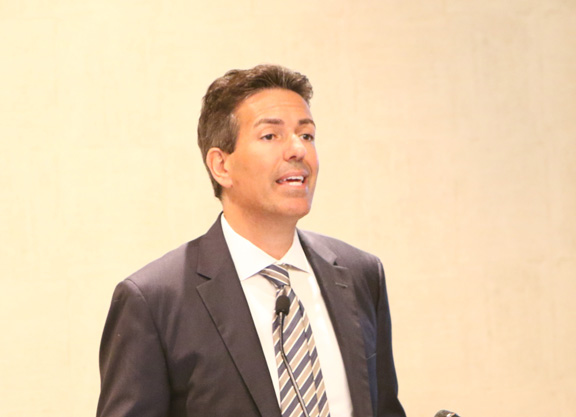 “The easiest way for me to get somebody to buy into our project and tell them about the project is really not to have them come to a race. I get them out there at 7 o'clock in the morning to see several hundred horses training, and it's an amazing sight.” –Walter Lynch, architect, on the renovations surrounding Laurel Park, which will include mixed-use residential and commercial development

“I think people having a glimpse in the day of the life of a horse is important. It's also helpful in combating a lot of the misconceptions about how racehorses are treated. If people just knew how well these horses are treated, that would be an easier battle to fight.” –Todd Gralla, director of equine services for Populous architects, on why racetracks of the future should be designed to give fans access to the backstretch

“Our biggest concern is that there is a lack of standards. There's a horse racing statute that allows for federal regulation of gaming, but there's no federal standard for the humane treatment of horses, the animals at the center of the enterprise. They should be at the center of our thinking for the purpose of their welfare and their well-being. So the argument, to us, falls very flat that the federal government shouldn't be involved in [welfare regulation] when the federal government is already deeply involved in regulating the gaming side of this.” –Wayne Pacelle, president and chief executive officer of the Humane Society of the United States

“Anti-doping is really not about catching people. It's really about deterring people from doing that behavior in the first place.” –Dr. Larry Bowers, recently retired chief science officer for the United States Anti-Doping Agency

“The more the brand is tarnished, the more difficult the reformation. And getting a reputation back is a lot harder that destroying the reputation in the first place.” –Richard McLaren, internationally recognized expert who has led Olympic-level investigations in sports doping and corruption

“Take a good horse, have a good time, take your best shot. If you pull it off, you're a hero. If you don't, you had a nice vacation.” –Trainer Ken McPeek, on racing abroad

“Millennials are a social generation. They are, by and large, inclusionary. So grandstands at racetracks and buildings that segregate are not their interest….What we have to learn how to do is reprogram from the paddock to the race and everything in between so it's a series of seamless and connected events stimulated by great technology and purposed for large groups as well as small groups.” –Donald Dissinger, senior vice president of EwingCole, an architectural firm that has led renovations for a number of prominent U.S. tracks

“We have three key points: How to be elegant, how to be uplifting, and how to be original. And we call that the 'Ascot way.'” –Juliet Slot, commercial director for Ascot Racecourse in England, on the intensive employee training program for 5,500 Royal Ascot meet workers

“The last racing owner of the horse is often the person the least invested in the horse….They're less invested and they have fewer resources, but they're the ones who are being told that they need to solve the problem and make sure the horse ends up in a good place, and that's a problem in my view.” –Steuart Pittman, a Maryland sport horse trainer who came up with the concept for the Retired Racehorse Project's Thoroughbred Makeover