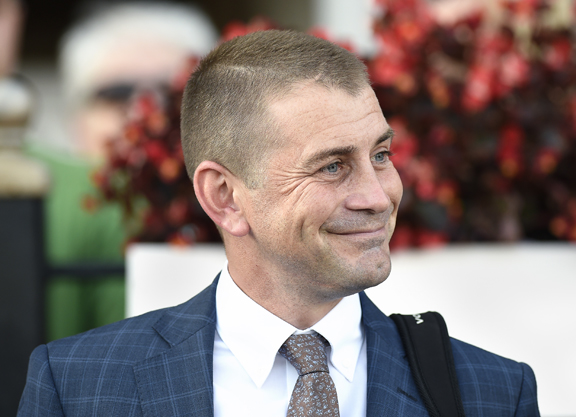 He was a valued and respected assistant to Todd Pletcher and was hired by Bridlewood Farm as their trainer, which gives him access to their first-class facility in Florida to train not only their horse but those for outside clients. Jonathan Thomas, just 38, has been busy building the groundwork for a top stable, one that some day could rival that of the premier trainers in the country. What he needed was a marquee horse to put him on the map.

That’s no longer a problem. Catholic Boy (More Than Ready) is coming off a win in the GI $1.2 million Belmont Derby, has won stakes on both the dirt and grass and has proven to be among the gamest horses in the sport. His next assignment will likely come in the GI Travers S., where he could be the second choice behind Good Magic (Curlin) and where a win would only further raise Thomas’s profile.

“The Travers and Belmont Derby are both obviously very important races,” he said. “For me, personally, it’s extremely meaningful. I think more important than that, for me being responsible for the career of Catholic Boy and showcasing his abilities and possibly putting him into a stallion barn down the road, that’s as meaningful as anything. He’s a deserving horse so are the clients that support us. Being able to deliver on a big day in the Belmont Derby was stellar for them.”

Thomas literally grew up on Rokeby Farm in Virginia and surrounded himself with horses from a young age. He began as a steeplechase jockey until a serious injured forced him to look elsewhere. He was an assistant to Dale Romans, spent some time working in Saudi Arabia, and then worked as an assistant to Christophe Clement and Todd Pletcher.

“Jonathan Thomas, he was a terrific assistant,” Pletcher said. “He’s a consummate professional, everything you’re looking for in an assistant trainer. He’s totally reliable, honest, good communicator, good horseman. We had some good years together. He did a great job, and I’m not surprised that he’s doing well on his own.”

In 2013, he left Pletcher to go work for Bridlewood and its owners, Leslie and John Malone. While he would be based for much of the year at their Ocala farm, he worked out an unusual arrangement with them as he would also be allowed to take on outside clients.

“We want to make sure we’re doing the best job possible on both fronts,” Thomas said. “I’m very fortunate to have the team that I have and the support I’ve gotten from my clients. Good people and good clients make it easy enough.”

Thomas says he currently has about 45 horses, which doesn’t include some of his 2-year-olds who aren’t quite ready for the races or horses coming back from layoffs.

Things started slowly for Thomas, and as recently as 2016, he had only two winners on the year from 18 starters, and stable earnings of $34,485. Things started to turn around when he began to attract outside owners.

Thomas discovered Catholic Boy at the 2016 Keeneland January Horses of All Ages Sale, where he RNA’d for $170,000. He was able to buy him after the sale for a “fair price” on behalf of owner Robert LaPenta.

“He was a horse that Mr. LaPenta and his team allowed us to purchase and develop and he seemed to be doing real well in our system, so they left him with us. Thankfully, he did,” he said.

Catholic Boy won his first two races on the turf, including the GIII With Anticipation S., which was Thomas’s first career stakes win. After running fourth in the GI Breeders’ Cup Juvenile Turf, he made his first try on the dirt and won the GII Remsen S.

That had LaPenta, his fellow owners and Thomas, thinking GI Kentucky Derby. He ran respectably in the GIII Sam F. Davis at Tampa, finishing second, but followed that up with a well-beaten fourth in the GI Florida Derby.

“He had a one off bleeding episode (in the Florida Derby), which was unusual,” Thomas said. “It was enough to explain the effort, which was a little below par for him. At that point in time, the right thing to do was to regroup. The Kentucky Derby is very important, but in our operation we never want to let it compromise the horse.”

When Catholic Boy was ready, Thomas sent him back to the turf and the result was two remarkable efforts. In the first, the GIII Pennine Ridge S. and then the Belmont Derby, he gave up the lead to the Chad Brown-trained Analyze It (Point of Entry) in deep stretch, looked hopelessly beaten and then came on again to win.

“He’s certainly the gamest horse we’ve trained,” Thomas said. “The first mile of those races I watched as a trainer and the last furlong to a quarter of a mile I watched as a fan. It was something to behold. Analyze It is a very good horse and he’s a good barometer for our horse’s effort. We’re very proud of him. This horse really grinds it out.”

It might have made more sense to keep him on the grass but the connections want a definitive answer as far as his dirt ability goes, which they don’t believe they got in the Florida Derby. Barring a last-minute change of mind, the Travers will be next.

“We owe it to the horse and to the clients to leave that option on the table,” Thomas said. “We’ve let the horse dictate our next step and I think we’ll continue to do that. The timing of the Travers is very good. If there’s something we don’t like we can always adjust, but it’s worth at least investigating.”

Catholic Boy remains the only stakes winner Thomas has ever trained, but it’s not hard to envision his career taking off. Catholic Boy has given him exposure, new owners are starting to take notice and he shares many of the same traits that made Pletcher a star. Like his mentor, he’s polished, professional and ambitious.

Does he see himself someday having a stable that rivals Pletcher’s?

“I think as long as we can do a great job and do what’s best for our clients and our horses, I’d certainly be willing to head in that direction.” he said. “As long as we’re doing a quality job.”

He has a long way to go, but he certainly seems to have the tools to succeed and now he’s got a horse everyone is paying attention to. The Travers will be a big race not just for Catholic Boy but for his trainer.