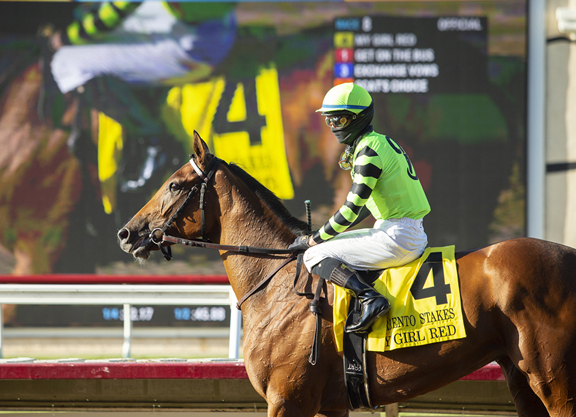 My Girl Red, who became the first winner from her freshman sire (by Afleet Alex)’s small first crop when she aired by 4 1/4 lengths at Santa Anita June 14, ran to short odds in Friday evening’s GII Sorrento S. to become his first stakes and graded stakes winner as well. Campaigned by the same connections who raced the 2014 GI Breeders’ Cup Juvenile S. winner and 2015 GII Jim Dandy S. winner, the bay out-footed her five rivals in the early scramble for position to take a narrow advantage into the turn. She posted splits of :22.17 and :45.88, and was not for catching as she kicked on wrapped up and clear of buzzed-about firster Get On the Bus, who did well from the rail draw and raced like a horse who would benefit from Friday’s experience.

“I didn’t have any special instructions; just ride her with confidence,” said winning rider Flavien Prat. “She showed speed away from there, then we got a nice breather on the turn. From there she just went on and won in hand.”

Trainer Keith Desormeaux added, “Flavien was telling me how she was looking around and kind of lost interest the last eighth. What was nice to me was that she was doing that the first quarter. I know it’s still early and the time is average. But I think she can go even quicker and I sure don’t want to complain. She has always shown signs of class and it’s nice to see one duplicate in the afternoon what we see in the mornings.

My Girl Red will be pointed towards the GI Del Mar Debutante S. Sept. 6.

Pedigree Notes:
Just a $17,000 KEESEP yearling, Texas Red missed by a neck from far back in his sprint debut before breaking through third out on the Del Mar synthetic in August of his juvenile season. He was third behind eventual champion American Pharoah in Santa Anita’s GI FrontRunner S. that September, and with that one absent crushed his competition in the GI Breeders’ Cup Juvenile at a tick under 14-1, besting fellow young sires Carpe Diem and Upstart in the process. He added the GII Jim Dandy S. at Saratoga the following year with a narrow defeat of Frosted, and eventually took up stud duties at Crestwood Farm.

Dam Morakami, meanwhile, was just a $21,000 pick-up at the 2017 Keeneland January sale while carrying a Street Boss colt. That colt was later sold for $150,00 at Keeneland September and would go on to take a pair of stakes (thus far) as Gold Street. Morakami produced another Texas Red filly last May and a Kitten’s Joy filly this year before visiting Into Mischief for 2021.
Prominent owner/breeder G. Watts Humphrey has a connection to both of Friday’s Grade II-winning juveniles. He raced Morakami, and bred GII Saratoga Special S. winner Jackie’s Warrior’s dam sire A. P. Five Hundred.