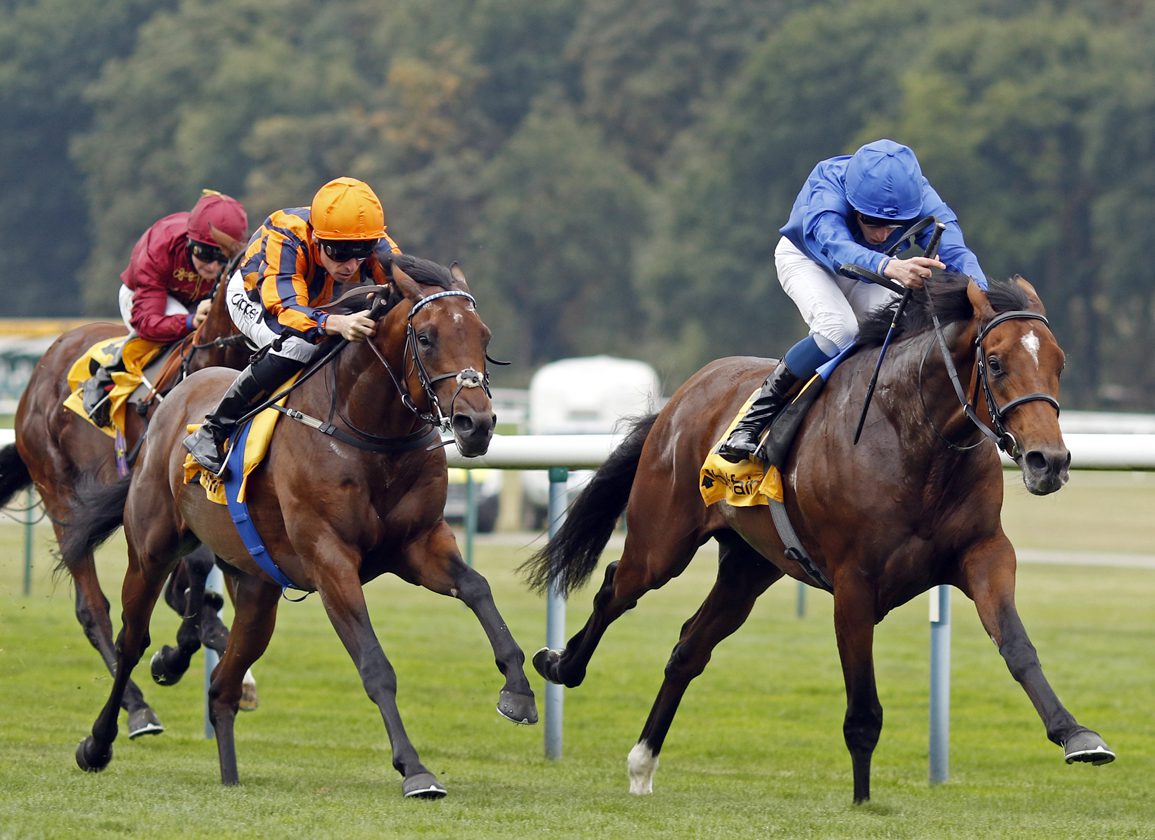 Sent off at 1-3 to extend his winning sequence in Saturday's Listed Ascendant S. at Haydock, Naval Power (GB) (Teofilo {Ire}) overcame some trouble in running to add to Charlie Appleby's enviable recent tally in juvenile black-type races. With the stable dominant in the G2 Gimcrack S., Listed Stonehenge S., G3 Solario S. and G3 Prestige S. in the past fortnight and soon to garner the G3 Sirenia S. later in the afternoon, any other result than an easy success for the 6 1/2-length Listed Pat Eddery S. winner would have been a major disappointment.

For a brief period inside the final three furlongs, that looked a possibility after William Buick had been intent on finding cover early and therefore found himself trapped in a pocket against the fence. As the leader Lion Of War (GB) (Roaring Lion) tired in front, Dancing Magic (Ire) (Camelot {GB}) held the homebred there until he was able to get out a furlong from home. From there, he readily drew away for an ultimately comfortable 1 1/4-length verdict over the latter.

Appleby has the G2 Royal Lodge S. at Newmarket as the next port of call for Naval Power and said, “That was another good learning day for him–Will got him into a nice box seat there and he's had to fight for his gap,” he said. “He brought experience into the race and the one thing I was pretty confident he was going to do was see it out well, so once the gap came his stamina came in and it kicked in at the right time. The plan if all had gone well today was to head to the Royal Lodge S. The Futurity Trophy would be talked about, but he's a horse that loves a sound surface so he's more likely to go for the Royal Lodge and if we're lucky enough to win that we'll put him away for next year.”

“On pedigree, he should be able to stretch out to a mile and a quarter and hopefully beyond but for a horse with that pedigree he has a lot of natural pace as well,” his trainer added. “He was very impressive at Ascot over the seven doing what he did and today was a different surface and he showed great courage and a bit of class. He's been hard to assess, as he's not a flashy worker and was leading a lot of the 2-year-olds early on. He's a straightforward horse who has done nothing but progress on the racetrack rather than at home.”

Naval Power, who beat the Gosdens' well-regarded Alzahir (Fr) (Sea The Stars {Ire}) on debut at Yarmouth May 26 before following up at Leicester June 23 and in Ascot's Pat Eddery on the King George card, is out of a daughter of the GI Spinster S. winner Asi Siempre (El Prado {Ire}) who produced the stable's GI Breeders' Cup Juvenile Turf-winning sire Outstrip (GB) (Exceed And Excel {Aus}). The dam, who was bought by Blandford Bloodstock for just €18,000 at last year's Goffs November Breeding Stock Sale, has a yearling filly by Harry Angel (Ire) who proved a snip at only €11,000 when purchased by John Madigan at this year's Goffs February Sale. She also has a filly foal by Raven's Pass.

William Buick fleetingly looked in trouble aboard @godolphin's 2yo son of Teofilo in the @Betfair-sponsored Ascendant Stakes @haydockraces – but class told in the end.