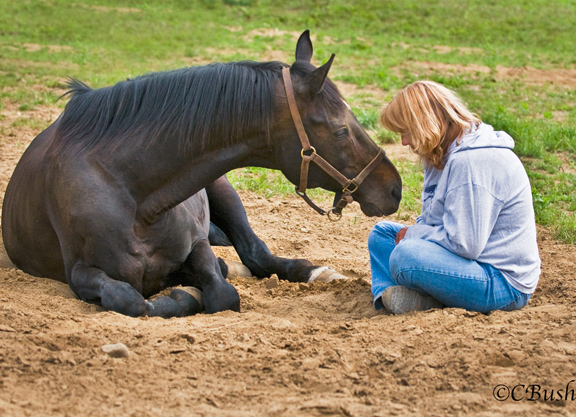 Next month marks the 10th anniversary of Old Friends at Cabin Creek. No place is more telling of how racing fans and the general public feel about racehorses. It is like a fan club for horses. Fifteen racing stars are currently living happily ever after at Old Friends, with a combined 624 starts, $8,894,911 earned, and 116 trips to the winner’s circle.

“The fact that the horses acquire many new loyal fans and visitors while they are retired here is remarkable,” said Joanne Pepper, owner of the farm and head of Old Friends at Cabin Creek. “The horses are so valued even though they aren’t racing.”

These aren’t just any horses. Roaming these paddocks, and expecting treats, are the likes of Commentator, Be Bullish, and Will’s Way. A fan favorite is Zippy Chippy, now 26, who started 100 times and chose never to break his maiden.

Every year in January, Cabin Creek holds a birthday party for all of the horses. In 2019, more than 400 people attended. Soup is served and it is all donated by local restaurants. It is a major fundraising event for the horses as well as feel-good event for everyone.

The farm gives guided tours in the summer and people are already buying their tour tickets for this coming summer. Tours are mostly led by nine-year volunteer June Shaw who is also the Backstretch Tour Supervisor for NYRA at Saratoga. She volunteers every day at Cabin Creek and is one of 40 unpaid workers who help Pepper with the horse care, meticulous cleaning of the paddocks every day, and fundraising.

“This is a wonderful place,” said Shaw. “I used to see Thunder Rumble on the track when I was giving tours and then I got to take care of him here. I love giving tours at Cabin Creek because the visitors are so moved and grateful that the horses have this safe home for life. They are also thrilled to be able to pet and give treats to most of them.”

Many new visitors arrive through via the Saratoga Visitors Center as well as by word of mouth. They do no advertising.

“Cabin Creek is an attraction for vacationers to the area from all around the world,” said four-year veteran volunteer Dan Milliman. “I’m a racing fan. I came for a tour and stayed on as a volunteer three days a week.”

The Peppers joined Old Friends, based in Kentucky, as a satellite, and took in their first retiree, Moon Shadow Gold, 10 years ago. Cabin Creek is named for Bobby Frankel, the late Hall of Fame trainer.

In reflecting on success of the endeavor, Pepper didn’t imagine she would have so many visitors and volunteers.

“The birthday party and the August party grow every year as does the number of visitors,” said Pepper. “I didn’t imagine it would be so big. It takes a lot of people to manage the fundraising and the tours. We couldn’t do it without the amazing volunteers.”

The unique personalities of these formidable athletes are on really display in this environment. Currently, the only stallion on the farm is Will’s Way. Cosmonaut was gelded this year at age 17 for health reasons.

Over the years, Pepper has had to say goodbye to Travers winner Thunder Rumble, Crusader Sword and Behrens among others.

“I can’t really say that I have had a favorite,” said Pepper. “But my relationship with Thunder Rumble was like no other that I have had with a horse. He was tough when he got here and he taught me a ton. We figured it out and I know he loved me too.”

“I feel so blessed that not only am I able to give these horses a happy home but also that I can promise to be there for them to the very end,” said Pepper. “They deserve that. Racing needs to make the promise of aftercare for life–whether through adoption or sanctuary–to every horse and then new fans will come to the sport.”

To officially celebrate the 10-year milestone, Old Friends at Cabin Creek is having a cocktail party honoring the legacy of trainer Bobby Frankel at Saratoga National Golf Club on Sunday Aug. 4 at 6:30 p.m. Click here for more information and to buy tickets.

The tour season opens July 2 and runs through Aug. 31. For more information, call Joanne Pepper at 518-698-2377 or go to https://oldfriendsatcabincreek.com/.