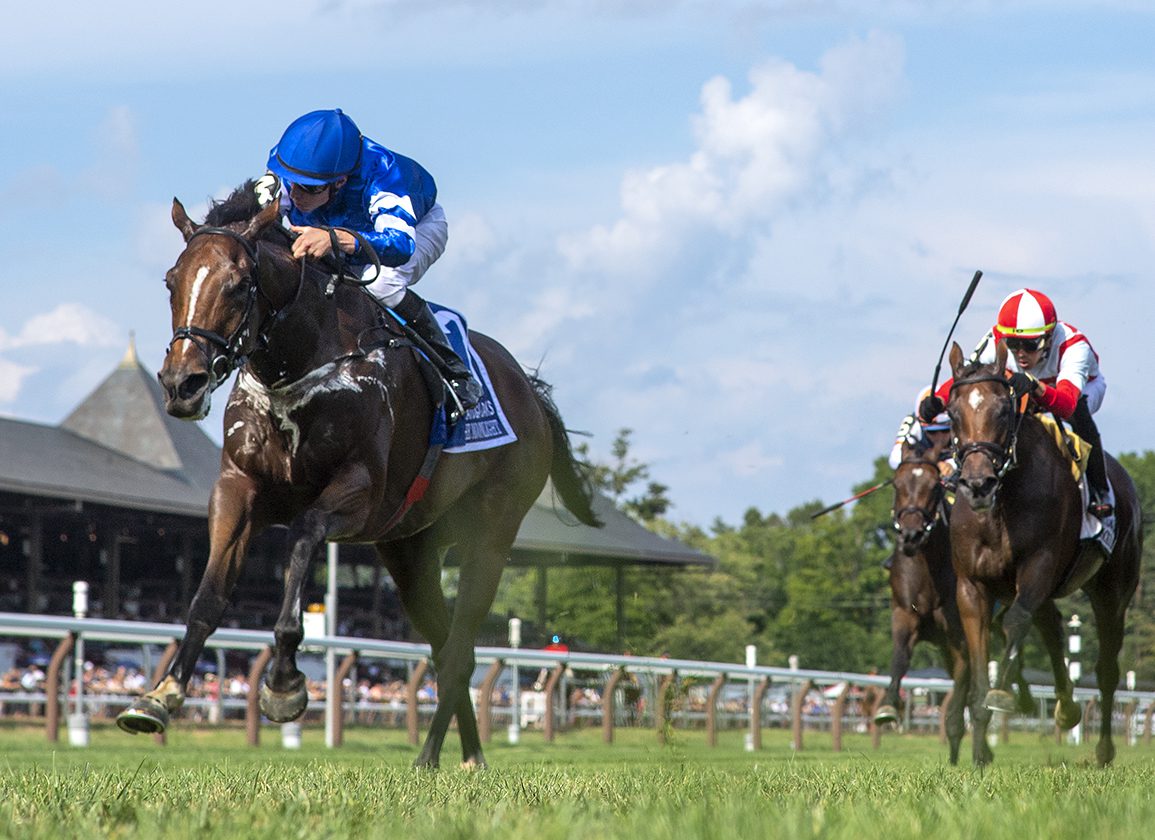 With The Moonlight | Sarah Andrew

The powerful team of owner/breeder Godolphin, trainer Charlie Appleby and jockey William Buick celebrated a second lucrative victory over the Saratoga turf in as many days as With The Moonlight led home a one-two finish for her sire in the GIII Saratoga Oaks Invitational Sunday. Having finished second to re-opposing McKulick (GB) (Frankel {GB}) in the July 9 GI Belmont Oaks Invitational, she was backed at even-money with a perceived pace advantage on that rival and after stablemate Nations Pride (Ire) (Teofilo {Ire}) parlayed a second in last month's GI Caesars Belmont Derby Invitational to a victory in Saturday's GI Caesars Saratoga Derby Invitational.

Visibly lathered, the bay and Buick allowed McKulick's stablemate Contemporary Art (Dubawi {Ire}) to show the way as they sat second by a couple of lengths. She sidled up to the pacesetter aggressively after six panels in 1:15.18 with McKulick swinging wide to join the fray. But neither Brown filly could run with the European raider in the stretch as she pulled away powerfully on her incorrect lead.

“She felt really good today,” Buick said. “I think the team had been really happy with the way she was training, so they were quietly confident going into it.

“She travels very well, which is key really. Our horses coming from Europe to here, they always improve with one run on these tracks. It's a lot different for them. Yesterday [with Nations Pride] and the filly today, they were always going to improve off that first run and I think they showed that.

“It's nice to come over here with two nice horses, two nice rides and two winners. It's a real privilege to be here to be honest. It really feels special.”

Scoring twice on all weather from four tries overall in England as a juvenile, With The Moonlight resurfaced to annex Newmarket's May 1 Pretty Poly S. convincingly over 10 panels, but faded abruptly to last in the G1 Cazoo Oaks the following month. She was ridden by Frankie Dettori in the Belmont Oaks.

“They went hard at Belmont and to be fair to Frankie, it was the first time he'd sat on her and I said, 'look, ride her like she'll get the trip,'” said Appleby, whose banner 2021 included eight Grade I wins in North America, including three on Breeders' Cup weekend. “On the evidence of today and evidence of that day, coming back a half a furlong suited her. She's got plenty of boot. You could almost bring her back to a mile. The more races she's got, the more experience she's got. She's learning how to do it. It was a good performance today.”

Appleby said With The Moonlight would not return for the 1 1/2-mile GIII Jockey Club Oaks Invitational downstate Sept. 17.

“The question mark was whether the Oaks would be something to look at, but that's clearly not an option for her,” Appleby said. “William said that was far enough for her today.”

“That's the plan,” he said.” He ships out on the 17th or 18th. He's in great order. It's been a long-term plan. We had a couple bumps in the road early on at Belmont [when third in GI Man o' War in May]. Unfortunately, the rain came in and there was no pace in the race. But, with what we've seen at home, we're very pleased with the way he's done so far. If he ships in well, he'll be a big player.”

With The Moonlight is the 63rd graded/group winner for her talented sire, and is bred on the same cross as this year's G1 Tattersalls Irish One Thousand Guineas heroine Homeless Songs (Ire) and last year's G1 Epsom Derby winner Adayar (Ire). Dubawi, meanwhile, is the broodmare sire of 27 grade/group winners worldwide.

Dam Sand Vixen, meanwhile, cost approximately $205,000 as a Tattersalls breeze-up buy and was a Group 2 winner as a juvenile. With The Moonlight's older full-brother Dream Castle (GB) took the 2019 G1 Jebel Hatta in Godolphin blue.

Sand Vixen has an unraced 2-year-old filly by Cracksman (GB), yearling filly by Blue Point (Ire) and a foal colt by Earthlight (Ire).