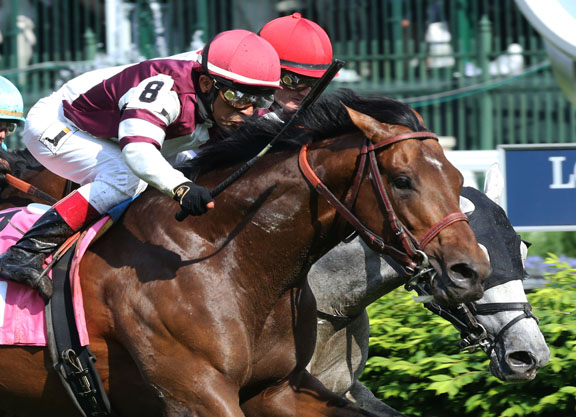 Airdrie’s Bret Jones said he is excited to have the opportunity to showcase this new stallion. “He’s been on our radar since he was three. It’s been a long courtship getting the deal done, but I’m so glad that we have.”

Divisidero’s career began with a debut victory at Gulfstream for Buff Bradley and owner Gunpowder Farms as a 3-year-old. Starting at the back of the field, he ran six wide through the second turn, and then showed a strong turn of foot to win by a half-length.

From there he went directly into graded stakes company, winning the GII American Turf S., also on the first Saturday in May, in his third start going a mile and a sixteenth on the turf. Again, he settled at the back of the pack before circling six wide heading into the stretch, and edged away from the field at the wire. He went on to claim the Pennine Ridge S. in his next start, setting a course record at Belmont Park.

Jones said the farm was drawn to Divisidero because of his strong start as a 3-year-old: “Divisidero was good right from the start. He wasn’t a horse that took time to develop. All we ask is that people go back and watch this horse’s races. If you watch his win in the American Turf S. and see the turn of foot that he had, it’s so exciting. That race was really when he got on our radar.”

His next two years on the track were highlighted by back-to-back victories in the GI Woodford Reserve Turf Classic S. In each, he faced staunch competition including Eclipse champions World Approval (With Approval) and Big Blue Kitten (Kitten’s Joy), as well as Grade I winners Tourist (Tiznow), Bal a Bali (Brz) (Put It Back) and Beach Patrol (Lemon Drop Kid).

Jones spoke highly of the competition in both of these races. “The list is really extraordinary. These two GI wins were against the best turf horses in the country, and Divisidero beat all of them.”

After transferring to the barn of Kelly Rubley for his 6-year-old campaign, he caught two more graded stakes victories in the GIII Arlington H. at six, and the GIII Red Bank S. at Monmouth at seven.

Jones said of Divisidero’s career, “He retired totally sound, and there is a lot to be said for that. This was a horse with an explosive turn of foot and a lot of speed, and these qualities are important calling cards for a potentially top stallion.”

Divisidero retired with earnings of over $1.6 million, claiming at least one graded stakes in each season of his five-year career, with victories at five different tracks.

Jones spoke about the combination of quality and commercial value he expects to see from Divisidero’s progeny. “Kitten’s Joy is absolutely, unquestionably, one of the best stallions in the world. A lot of people talk about Kitten’s Joy not being the most commercial horse in the world, which frankly is a little silly, because they run faster than the horses they compete with.”

Kitten’s Joy has been leading turf sire for the last six years, and will likely be number two on that list for 2019. He also consistently ranks in the top 10 in North America on the general sires list, finishing in the top spot last year with the likes of Hawkbill, Henley’s Joy, and Catapult.

Jones also noted that Divsidero’s commercial appeal was another factor that drew the farm toward him. “Thankfully, Divisidero is a nice commercial prospect. He was an expensive Kitten’s Joy, picked out by a really good judge in Josh Stevens [then] of Margaux Farm. He is a medium-sized horse, standing right at 16 hands. He is really well balanced with a big walk and nice physical. Everything is in the right place.”

Divisidero was a $250,000 yearling purchase at the Keeneland September Yearling Sale, bred and consigned by Hinkle Farms.

Jones said that Divisidero’s pedigree is a defining quality on his resume. “His pedigree is fabulous. He’s from arguably the best female family there is, tracing directly back to Northern Dancer, Danehill, and Halo. The genetic bank is all there. This horse has as good a pedigree as you could ask of one.”

Out of the Lemon Drop Kid mare Madame Du Lac, Divisidero is a full-sibling to Kitten’s Kid, who ran second in the GIII Pilgrim S. at Belmont. Madame Du Lac is a half-sibling to Genial Boy (Arg) (Songandaprayer), a graded stakes winner in Chile, and is out of the stakes-placed mare Geisha Girl (GB) (Nashwan).

Jones said he believes Divisidero will appeal to buyers as one of the next outstanding turf sires at a time when turf sires are in short supply in the United States. “There’s a lot to be said for the movement we are seeing as turf racing becomes increasingly more popular.

“These turf races are so important, and there’s a shortage of stallions that are capable of getting a superior turf horse. This emergence of turf racing is carrying a lot of momentum, and hopefully Divisidero can fit into that fabric and be one of those horses people talk of as a sire for any turf race.”